The LTA had long identified the need for a centre of excellence, to provide a world class facility for players and coaches and to be their administrative headquarters.

The NTC has been organised around a large open courtyard which has been positioned to retain a large existing London plane tree. The indoor courts and player facilities are situated to one side of the courtyard with the office accommodation to the other. These two areas are joined by a reception building which also accommodates a cafe.

Richard Cherrington, Rowecord Engineering Contracts Manager, explains: “The project’s brief from the LTA extended beyond the provision for a top class playing, coaching and office facility; the project had to be environmentally friendly, robust and durable. It also had to be cost effective and above all somewhere tennis players would be inspired to work and train at.”

The structure that houses the indoor tennis courts measures 114m x 54m and is arranged with two storey blocks running down either side of the six internal courts. The roof is curved in section and has a column free span of approximately 40m.

“A number of structural options were considered for the roof during the design stage. The choice of steel was driven by cost, ease and speed of erection, aesthetics, functionality and durability. The design features pairs of steel arches, spaced at 17.4m centres, and spanning 40m across the courts,” says Mr Cherrington.

Each arch consists of three curved I-beam sections, with the central portion bent to a constant concave radius and the outer portions constant convex radii. These arches are supported by pairs of concrete shear walls.

Tapered, raking steel struts prop the beams above the court baseline and are attached into the side block structures at first floor level. These struts act as a structural arch thrusting between the concrete abutments. The outer portion of the curved beam spans between the prop and the adjacent side block roof level.

The steel roof structure, acting partly as an arch in compression and partly as a beam in bending, provides a structurally efficient solution for the long span roof.

The overall size of the court building is such that, conventionally, the roof would be divided up by movement joints in order to control in-plane movements generated by temperature changes causing the structure to expand or contract. The design team chose an innovative solution, allowing the roof to ‘float’ with horizontal restraint provided only at key locations. 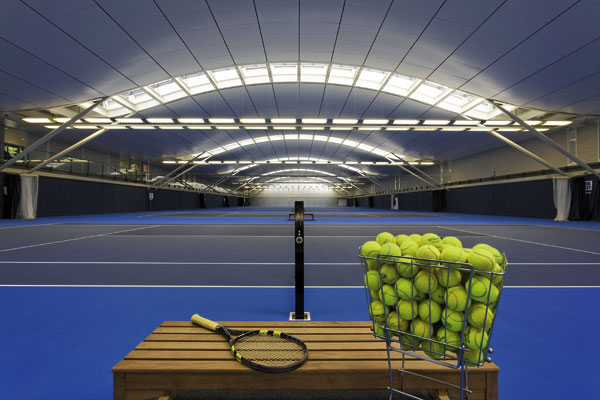