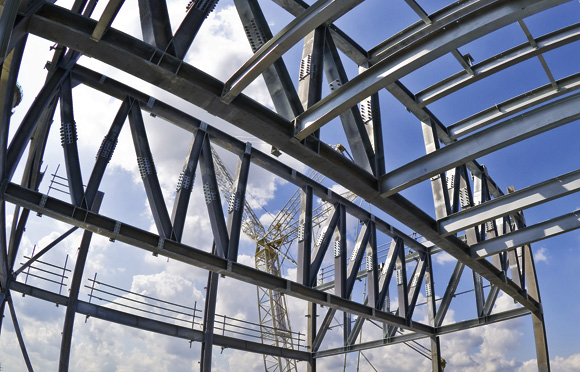 All steelwork has been galvanised for added durability

Housed within a large steel frame, the UK’s largest energy from waste plant is taking shape on the banks of the River Thames in north Kent. Martin Cooper reports.

Alternative methods for waste disposal is one of the main challenges facing local authorities throughout the UK. Coupled with the need for greener or renewable sources of fuel, a number of energy from waste plants are planned up and down the country.

One such facility in Belvedere, Kent has secured planning permission and funding, and is rapidly taking shape on the southern bank of the River Thames. To be operated by Cory Environmental, it will be the UK’s largest energy from waste plant when it goes online in 2011.

Being built on a brownfield site which once housed a Borax works, it will process more than 585,000t of municipal and commercial waste per year, and provide 66MW of electricity to the local grid. Making use of its riverside location, a new jetty is being constructed as part of the overall scheme, and this will allow the majority of waste to be delivered by barge, removing 100,000 truck movements annually from the roads. As the bulk of the waste will be sourced from four central London boroughs it is also envisaged that the facility will make a real contribution to the capital’s ability to meet its landfill diversion targets. 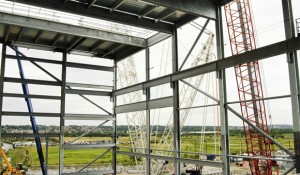 The environment and sustainability have played key roles in the design of the project as well as the future plans for the facility. Riverside will be the first plant in Europe which is designed to reach at least a net electrical efficiency of 27%. The plant is expected to exceed this limit by implementing multiple recovery technology steam conditions. The site is also located in an area earmarked for future development, and with this in mind the water-steam cycle of the plant has been designed for possible off-take of heat supply for approximately 60,000 local homes.

Main process contractor for the project is Swiss-based Von Roll Innova, a company with a wealth of experience in similar projects around the globe. Design and build sub-contractor for the civil engineering and building elements is Costain and it started on site in July 2008.

Construction of the main building began towards the end of last year. It is a massive structure and covers an area of over 13,000m², with a curved roof rising to a height of 55m. The majority of the main frame of the building is being erected with structural steelwork. This will eventually include more than 2,000t of steel, with a similar amount of steelwork being installed by another subcontractor, for internal supports and walkways around the plant’s equipment.

“The key to this project is integration,” explains Nick Hayes, Divisional Director for Bourne Steel. “We, as well as all the other sub-contractors, are all working around each other. In some areas steelwork is being erected first, but in other sectors the equipment is installed first and we then have to come along and thread the steel columns, some 30m long, between large pieces of processing kit.”

Items such as water tanks and the turbines are too large to be installed once the building is complete, so they are being assembled on-site and placed in their final locations prior to the main frame being finished. This will also ensure the facility is ready to meet its important late 2010 commissioning period. 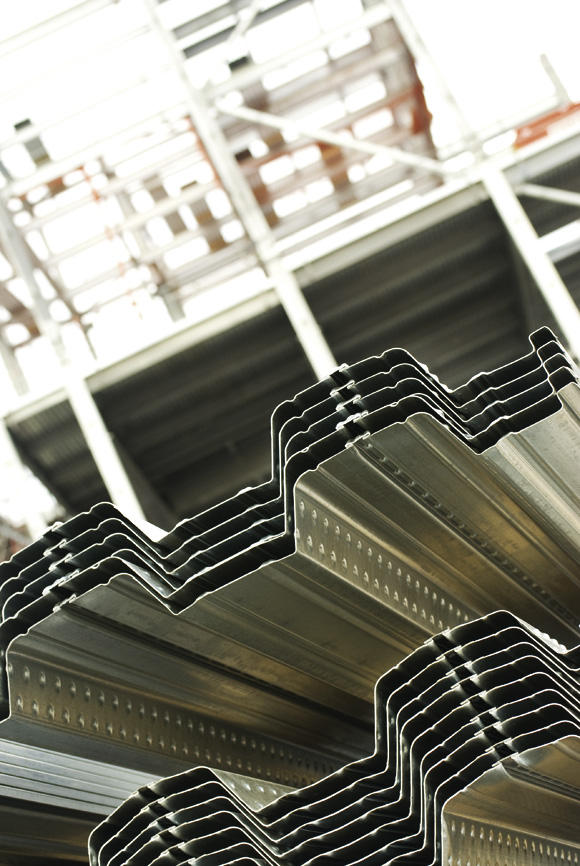 As well as the main frame and metal decking, there is also another 2,000t of internal steelwork in the project

“We have some large crawler cranes on site which are shared by the sub-contractors, and many trades working around each other, so collaboration is a key issue on site,” says Nick Lowe, Costain’s Agent for Steelwork and Cladding

Much of the steelwork will be erected on top of concrete walls, such as the waste bunker where 20m long steel columns will extend this part of the building upwards to connect to the steel roof. Two overhead grab cranes, to pick waste and deposit it into feed hoppers, will be suspended from the upper steelwork.

The steel framed building integrates the key process under one roof, this includes the turbine hall, boiler house, flue gas treatment hall and a control room, which will be suspended internally from the roof by 18m-long trusses.

All of the steelwork used for the project’s frame has been galvanised for durability. One of the largest galvanising baths in the UK has been used to accommodate the large truss sections.

The stability for this vast building is derived from the walls, but a lot of temporary bracing is being installed by Bourne as it erects the main frame. “The temporary steel will remain until we start erecting the roof beams that tie the building together,” explains Mr Hayes.

The steel wave-like shaped roof, which will reach a height of 55m, is such a challenging and eye-catching shape that all the 36m-long cellform beams will be trial erected, in order to get the correct geometry as there is no constant radius.

The sub-structure and some other parts of the superstructure are constructed with more than 25,000m3 of concrete. One of the critical elements of the project so far was the slip forming of the waste bunker, which required 4,000m3 of concrete to be placed during a 24 hour programme which lasted for three weeks.

This large concrete box is approximately 60m long x 30m wide x 30m high, and is partially sunk into the ground. This is where trucks will deposit waste for the initial process within the facility.  An adjacent tipping hall will allow up to 12 trucks to tip waste into the bunker via chutes cast into the slip formed wall.

“This a complex and challenging project,” sums up Mr Lowe. “But a type of job I hope we will be involved with again, as more of these plants are built in the UK.”

Rough guide to what goes on inside the Riverside facility

Waste from the jetty (and approximately 15% by road) will be deposited into the waste bunker before cranes then feed it into hoppers for processing via three process trains. Each train has a four-pass steam generator. Electricity is generated from the produced steam and the waste is reduced in volume, by burnout, by up to 90%. A by-product, bottom ash is collected for reuse in the construction industry. The remainder of the process involves cooling and cleaning the resultant gases prior to discharge, via the plant’s flues.