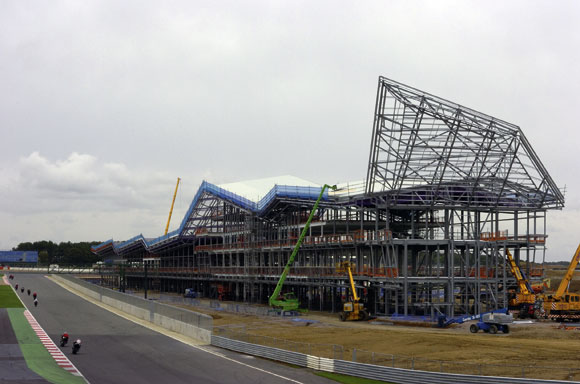 SiIverstone is one of the UK’s most iconic sporting venues and one which evokes thoughts of high speed racing, chequered flags and the occasional home winner, as last happened in 2008 when Lewis Hamilton won the British Grand Prix.

The former WWII RAF airfield has been synonymous with F1 racing since 1948 when Silverstone held its first British Grand Prix, an event it has hosted every year since 1987.

The circuit has continually evolved over the years with alterations to the track’s configuration as well as spectator and competitor facilities being improved. This process must continue as it is seen as vital to Silverstone keeping its position in the top tier of world motor racing circuits. 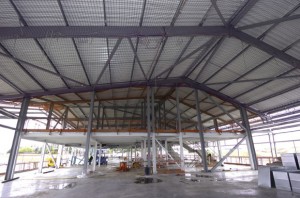 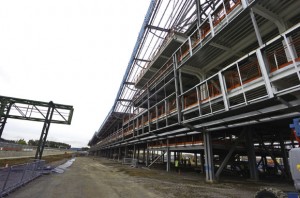 Part of this on-going programme is the construction of a new pit lane and paddock complex currently going up between Club Corner and Abbey (two of the circuits famous corners). Once complete the starting grid and finishing line will be moved, from their current position on the other side of the track, to the front of the new structure.

Housing 41 team garages along the ground floor, the 360m-long steel framed structure will also accommodate a media centre, hospitality suites – with a capacity of 4,000 – and a race control box.

Taking into account the many functions the building will perform, the design concept called for flexibility, while architecturally a strong impression of velocity and sleekness was required.

“The roof form takes its lead from modern cars with sleek lines and a blade at one end,” says John Rhodes, Associate Principal at Populous. “It depicts excitement, and the blade also acts as a feature or signpost to the building.”

To create the illusion of speed and excitement the paddock’s roof is dynamic in form as it rises, falls and flares to mimic movement. The roof is also monolithic, with no joints, gaining its sleek seamless appearance from a liquid applied roofing material.

The dips and troughs culminate at the blade, which is a non-habitable 16.5m long fin-like structure jutting forth at 40 degrees from one end of the building. It has been constructed from four main steel trusses, each one assembled on the ground and erected with two 50t capacity cranes. One crane lifted the truss and held it in position, while the other crane erected the smaller in-filling sections. The trusses are all 16.5m long and at their widest point they are 2.18m deep. Overall more than 300 individual hot rolled steel pieces were used to construct the fin.

The steel frame has been structurally divided into four sections

Built on a greenfield site and founded on pad foundations, the paddock is structurally divided into four sectors, all separated by circulation cores containing stairs and lifts. Block one, nearest the blade, has three levels, while the rest of the structure has two floors.

Race team garages (high enough to accept truck racing vehicles) are spread along the ground floor of the paddock, above level one is mostly open-plan with two mezzanine floors, giving it the required flexible design for a multitude of functions.

“One of the main reasons for choosing a steel frame was that it gives us this flexibility,” adds Mr Rhodes. “Using a fairly large open plan grid, the hospitality areas can either be partitioned into separate boxes or the whole floor can be open plan for exhibitions. The mezzanines allow us to create VIP areas, separate from the rest of the floor level.”

In block one, a media centre has been sandwiched in between the ground floor garages and the hospitality level. Just below the blade, block one also contains the racing control centre overlooking the new pit entry point.

Barrett Steel Buildings has undertaken a design and build contract for the project’s steelwork. It has been on site since May and erected approximately two-thirds of its 1,200t steelwork package prior to this year’s Grand Prix, when the site was closed down (see left).

Block one was the first section to be erected along with its adjacent core, the largest of the structure’s cores. “We started at this end because this core will have all of the services for the media centre as well as hospitality zones,” says Stuart Bew, Senior Site Manager for Barrett Steel Buildings. “As there are more follow-on trades in this area it was important to get the steel up as early as possible.” 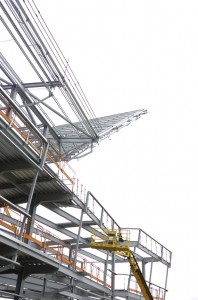 The largest of the cores also took time to erect because of its complex configuration, as one side as three levels (block one) and the other only two, with a sloping roof above. To accommodate the varying floor levels Barrett has installed a number of column trees, with as many as seven beams connected to them.

Steelwork then continued down the structure with block two being erected, followed by block four. After the Grand Prix hiatus, block three was subsequently erected by in-filling between the previously erected steelwork.

“Again block four is slightly more complex as it has a bridge connecting the first floor with ground floor and it made sense to erect it early,” explains Mr Bew.

The overall paddock steelwork programme, including a small adjacent steel framed energy centre was completed during September. The project is on schedule for its 2011 completion date, with the paddock and pit complex due to be used first for next Spring’s Moto GP, followed by the big unveiling for the British Grand Prix in July. 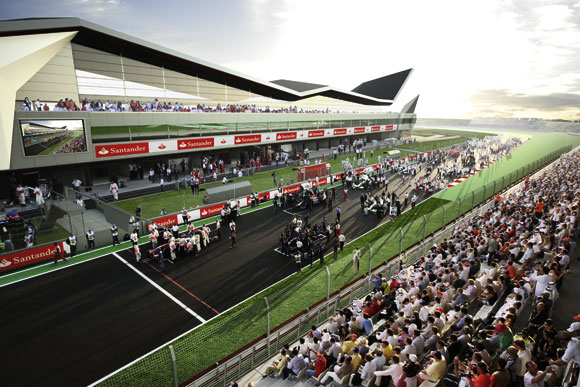 The paddock will be open for next year's British Grand Prix

Working around the Grand Prix 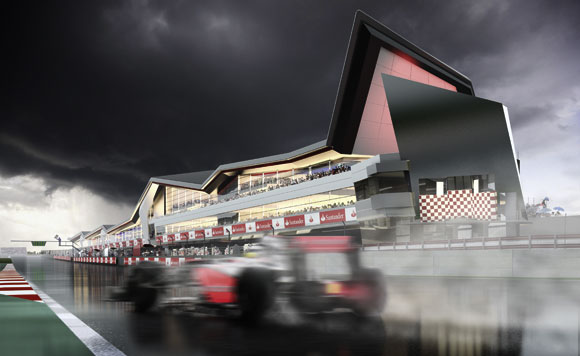 The structure's design mimics movement with its peaks and troughs

One of the more out of the ordinary elements associated with the project is the fact that Silverstone has not closed for business during the construction programme, and this year’s British Grand Prix went ahead as planned in July.

“There was a two week window before the Grand Prix weekend when we had to completely decamp from site, take down all hoardings, remove all plant equipment and basically hand the project area over to the client,” explains Buckingham Project Manager Clive Bailie. “However, the Monday after the event we moved back in and as everything went like clockwork we were back working as normal on the Tuesday.”

The whole decamping procedure was planned well in advance and was written into Buckingham’s contract as nothing could be allowed to prevent the Grand Prix taking place. Planning in advance helped with this unusual element, while client and contractor have also had to work closely together to get most materials and equipment to site. As the paddock is inside the circuit, deliveries have to cross the track (which is in use most days) and this often requires 48 hours notice being given to the track officials.