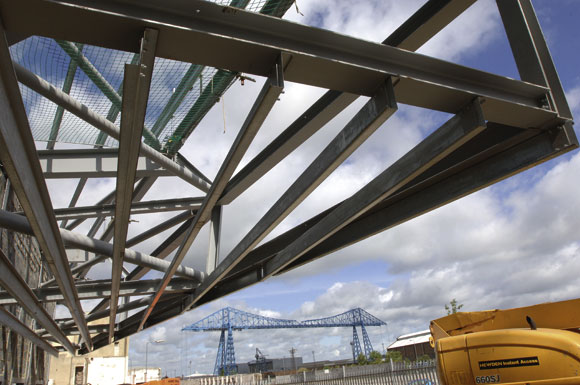 Teesside’s maritime heritage has provided the inspiration for the design of a new educational facility in Middlesbrough. Martin Cooper reports on a project which forms the initial stage of a large waterfront regeneration scheme.

Middlehaven, which lies adjacent to Middlesbrough town centre, was a thriving and vibrant dock in the 19th Century and acted as the catalyst for the industrial growth in the surrounding Teesside region.

The dock owed its existence to the extension of the Darlington to Stockton-on-Tees railway in the 1840s, brought about by the need to find a deepwater port facility for transporting coal to London. The River Tees at Stockton was found to be too shallow to accept large vessels and an area downstream, at present day Middlesbrough, was chosen.

However, in recent years, the economy has changed dramatically and many of the key local industries have become redundant. Coal isn’t mined in the area anymore, let alone delivered to London, and the dock has been closed since 1980.

Recently an £18M reclamation project encompassing some of the dock’s basin has been completed. This has added land to a waterside regeneration site covering more than 250 acres, which has been prepared for a large-scale mixed use development.

Situated between two of Middlesbrough’s most striking landmarks – the Transporter Bridge and the Riverside Football Stadium – one of the development’s initial projects is a new 32,000m² sixth form college. Known as Middlesbrough College Middlehaven, it will cater for 20,000 students and will replace four educational establishments currently dotted around the town.

In keeping with the area’s maritime heritage the inspiration for the design of the college is based on a ship at sea. Jon Leach, Project Leader for Faber Maunsell, says: “One of the two blocks, a five-storey building, is known as the hull, while the large two-storey steel sector has a wavelike roof and this could be interpreted as the sea.” 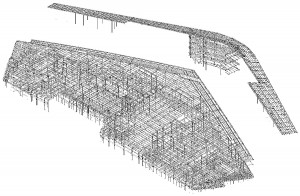 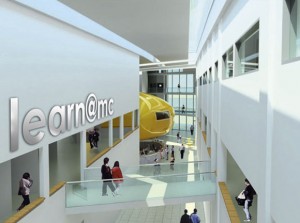 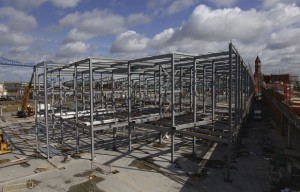 The steel structure has a number of differing grid patterns

The college is essentially divided into these two parts: the five-storey concrete framed structure which is slightly pivoted around the main entrance and a semi spherically shaped steel-framed two-storey structure at the back. Both sections are separated by a covered street, which varies in width from 6m to 22m, and shares the same steel roof has the steel structure.

The concrete block will eventually accommodate class rooms and offices, while the steel structure contains a sports hall, theatres and workshops. “There are some long spans in this building, up to 30m in the sports hall, which is why steel was chosen for this section of the project,” explains Mr Leach.

However, it was the steelwork’s complex geometry which presented the most challenging aspect of the project. “Especially under the very short timescales involved,” says Mr Leach.

This saw the design of the scheme progress from felt pen mark-ups in January 2006, to a frozen tender scheme in June and then arriving at a coordinated construction design by August 2006.

The complexity of the geometry not only stems from the steel structure’s semi spherical shape, but also the fact that one building will contain numerous different elements each with their own spatial and educational requirements. As well as the sports hall, a number of other modules with column free long spans are being incorporated, including a theatre and workshops.

This results in the grid pattern varying from anything from 6m x 4.5m up to 6m x 10m. For stability, cross bracing has been placed at various discrete points around the grids throughout the structure, such as beside the staircases.

“The majority of the building is two storey, but in the middle there is a double level sports hall with long 30m-long spans,” says Mr Leach. “This again, radically alters the grid pattern. We have attempted to rationalise the grid where possible to economise the structure, but also to give a more ordered appearance where the structure is exposed.”

John Richardson, Elland Steel Contracts Manager, comments that steel erection began in March and is due to finish in September. “When we came on site the concrete slab for the steel structure was already down and this allowed us to run mobile cranes on it which has eased our work.”

Elland Steel has divided its erection programme into three phases, explains Mr Richardson. “We’ll erect the main steel structure, then the building’s wave-like roof and finally the entrance area in the hull building and a steel roof which wraps over it.”

Once the project is complete, the steel wave-like roof will be one of the most eye-catching elements. At its longest the roof is 207m and at its deepest 82m. However, the structure is based on a segment of a sphere, and consequently the wave-like curve will be visible from whichever angle it is viewed from.

“The roof curves in both directions,” explains Bob Pawlett, Project Coordinator for Elland Steel. “However, it’s a large curve with the radius close to 1km away, which would be well underground.”

The geometry of this steel roof also incorporates the covered street which separates the two main buildings. It is at roof level that steel connects into the concrete hull structure via a number of plates cast into the precast columns.

“Because of the shape of the roof there are varying eaves around the structure, while the bearing connections into the concrete structure were a challenge to get them in the correct positions,” says Mr Leach.

The steelwork is generally set at 6m centres and this doesn’t necessarily match up with the concrete grid. “The corbels supporting the bearings were cast at different levels to suit the varying roof levels and the steel consequently connects into columns and sometimes into slab,” add Mr Leach.

Another important steel part of the project is the entrance and adjoining foyer area which is actually inside of the concrete hull building and connects into the covered street.

Elland Steel will erect approximately 150t of structural steelwork for the entrance and this includes five feature bridges at each floor level. Incidentally, the company will also erect another four 6m-long bridges over the covered street, connecting the first floor of the steel building with the concrete building.

“There are some long spans of up to 15m in the entrance foyer and back propping wouldn’t have been possible in concrete,” says Mr Leach, explaining why steel was again chosen.

The five bridges traversing the entrance get progressively shorter (first level bridge is 20m-long) as the foyer narrows towards the top.

All of the bridges are suspended from steel hangers and a large steel transfer structure with a movement joint at one end and connections into the concrete interior wall at the other.

Summing up on why steel was used for this project, Mr Leach says the building is positioned over a buried dock wall and column loads are transferred over the wall on piled transfer beams spanning up to 12m.

“The use of steel for large sections of the building has limited the overall weight of the building and hence assisted in limiting the scale of the transfer structures in these areas,” he says.

The College is due to be completed in time for the 2008 Autumn term.