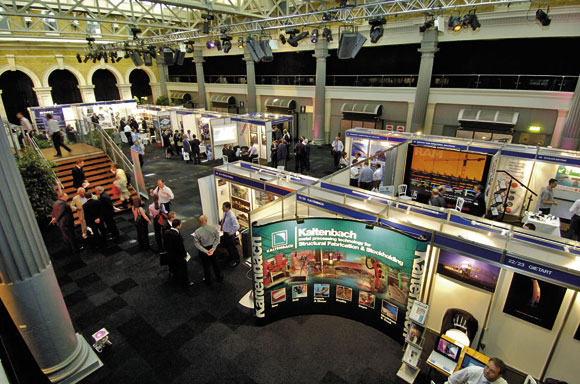 The Steelday exhibition was attended by clients, specifiers and designers

The 2007 Steelday organised by Corus and the BCSA was a resounding success for exhibitors and delegates alike. Over 40 exhibitors took stands and over 500  visitors attended the one day event.

Steelday’s seminars proved to be a popular feature at the new venue of the former Billingsgate fish market. A programme of six seminars was held, each seminar delivered twice so that all could be attended.

In his seminar on the Economic Design of Multi-Storey Buildings Colin Smart, Regional Technical Manager, Corus, said there are many reasons for steel now commanding over 70% of the market for multi storey non residential buildings, but contractors like steel’s speed of construction and the way in which it easily lends itself to long spans, which are generally required in today’s commercial market.

“Long spans are only marginally more expensive in steel than short spans,” Mr Smart said. Mr Smart used the steel framed Crystal Palace building, erected in Hyde Park for the Great Exhibition of 1851, as an early example of steel’s capability for dismantling to be re-erected elsewhere.

Mr Tilley also gave examples of the prestigious projects, which have made use of the new Corus Celsius oval sections and the Corefast system.

“Together with Corus and SCI we have issued publications and are holding seminars to guide companies through this potential minefield.” He also advised delegates to use the access-steel website for all up-to-date information on Eurocodes.

Dr Roger Pope (left), BCSA Technical Consultant, added that European Standards are coming and the National Standards will be withdrawn in 2010.

In a sustainability seminar Dr Michael Sansom, Manager, Sustainability Group, at SCI, said steel’s recyclability was its trump card in sustainability debates. It was well established that steel is structurally efficient and this translates into resource efficiency.

Studies on an Oxford University building showed that the steel option was 34% lighter than a concrete alternative, generated 8% less CO2 and required 56% vehicle movements to the site.

Dr Sansom said steel was becoming recognised as offering an alternative to concrete for foundations in areas like the City where development sites were being blighted by heavy concrete foundations from earlier generations of construction.

Corus Construction Development Manager John Dowling described the success of the massive investments made into researching the behaviour of steel frames in fire, which meant that more was known about steel in fire than any other construction material.

Mr Dowling described the features of DD9999, which was emerging as an alternative to Approved Document B, which governs approaches to fire engineering. “The BSI is turning this into a British Standard to replace Approved Document B,” he said. “This represents a much better approach than the approved document and I commend it to the industry.”

Bridges was highlighted as a growth market for steel by Manager Construction Development Chris Dolling of Corus. Steel was being selected increasingly for both road and rail bridges, and for shorter spans as well as the longer spans that would traditionally have been steel.

Weathering steel was being selected by architects and clients for aesthetic reasons as well as low maintenance characteristics. Early involvement of main contractors was  one factor behind the recent success, as they clearly grasp the advantages of steel such as being able to keep haul roads open during construction. Steelwork contractors’ investment in sophisticated computers and state-of-the-art fabricating machinery like welding robots was another key to rising demand.