Posted on September 11, 2020 by NSC in Projects and Features, This month's featured stories 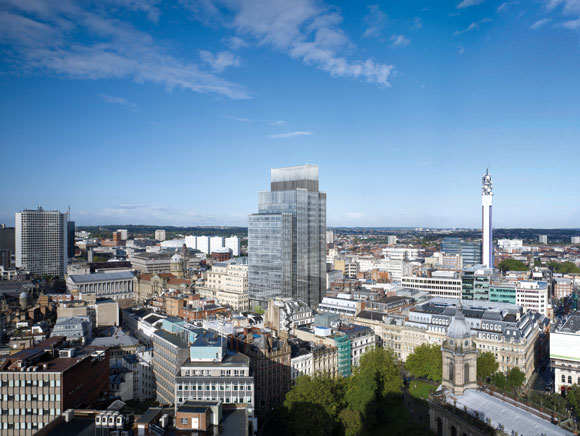 A steel-framed solution has been chosen for the construction of 103 Colmore Row, which on completion will be Birmingham’s tallest office tower. Martin Cooper reports.

103 Colmore Row is the tallest office tower currently under construction in the UK outside of London, and it is an example of how the commercial sector is thriving in locations other than the nation’s capital.

Reaching a maximum height of 108m, the tower reuses an existing four-storey basement and the foundations from the plot’s previous 1970s tower in order to minimise the cost of the substructure works. The weight of the steel-framed superstructure is distributed by a series of concrete transfer walls to the existing foundations were possible. As the footprint of the new building is slightly larger than the existing subterranean levels, some columns land outside of the existing basement and here new piles have been installed.

“Because we are re-using the substructure, we needed a lightweight frame for the building and so a steel-framed solution was the only viable option,” says Davies Maguire Project Engineer Malcolm Archer.

The project’s steel frame starts at basement level three, sat on top of a concrete transfer deck and derives its stability from a full height concrete core, which is positioned along the eastern elevation. 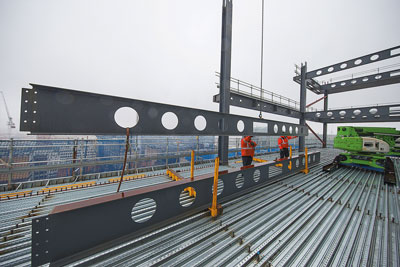 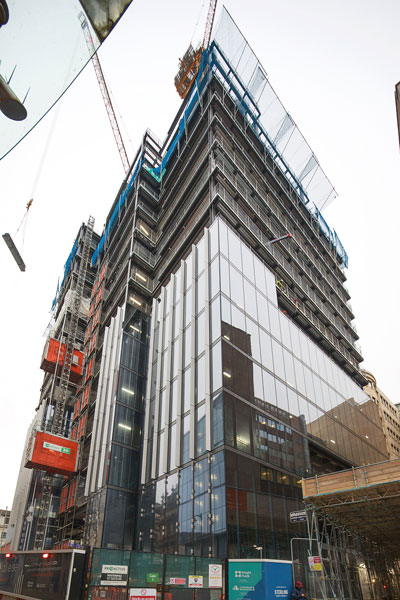 More than 2,400t of structural steelwork has been used for the project

An offset core, along with long-span beams has created the maximum amount of floor space possible 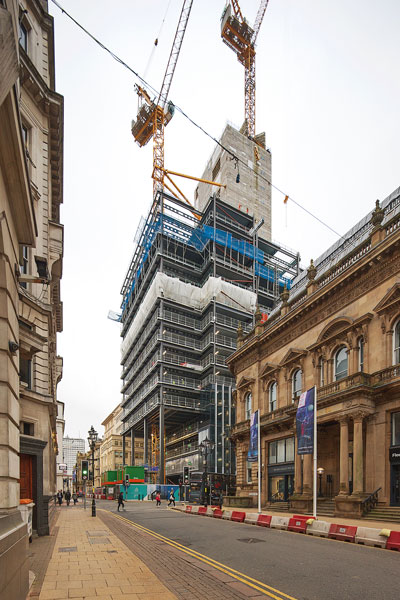 Positioning the core along one of the elevations, instead of in the middle of the structure, has helped the scheme to maximise the available floor space. The core’s position was also dictated by the fact that the building has steps at levels 18 and 21, and the chosen elevation is the one area that reaches the full 26-storey height, allowing all of the lifts to be located in one place.

A series of Fabsec cellular beams radiate out from the core to create open-plan office space, which contains just one line of internal columns. The cellular beams span up to 12m and accommodate all of the building’s services within their 350mm-diameter holes.

Commenting on the scheme’s use of structural steelwork, Andrew Hawkins, Development Director, Sterling Property Ventures says: “More than 2,400t of steel has been used in the construction of 103 Colmore Row. The steel was predominantly manufactured in England and fabricated in Northern Ireland, which is great for the UK industry as well as reducing the building’s carbon footprint. The mega columns at the entrance to the building provide one of its main architectural features, and are the largest of their kind in the city.

“Severfield fabricated, delivered and installed the steelwork in challenging circumstances. We are grateful for their professionalism and commitment to this project.”

These large steel sections form one of the building’s architectural highlights; a four-storey high winter garden that occupies the lower part of the structure along its main elevation.

For the first four levels, this one part of the building’s office accommodation is set back by 9m behind the winter garden.

From the fourth-floor upwards, the structure’s offices sit atop the winter garden with the mega-columns supporting the front of the steel frame up to level 26.

As the name suggests, the mega-columns are so large they were the only steel elements that could not be installed by the site’s tower cranes.

Severfield Project Manager David McGurk explains: “We had to bring a mobile crane to site in order to lift the columns into place. However, this large piece of kit required a temporary road closure, which meant we had to do the lifts during October when the nearby streets were closed due to an annual Xmas market.

“This meant the columns were installed ahead of the natural erection programme and they were initially erected with temporary supports, which were only removed once the main frame was erected around and above the columns and the permanent connections were made.”

As well as an architectural feature of the scheme, the winter garden will also serve to extend the public realm of the surrounding area. To add some artistic interest, a large abstract steel sculpture, known as Equinox, weighing 700kg and measuring approximately 6m × 4.5m will be hung from the soffit of the garden’s roof steelwork.

Along the northern façade of the building a further design feature has extended the amount of useable office space within the building by introducing a cantilever at second floor level over an adjacent service road.

Severfield has installed two large plate girders, weighing 16t and 14t respectively, that cantilever over the thoroughfare by up to 3m, and carry the loads of 21-storeys above, back into the main frame.

As previously mentioned, Colmore Row has a couple of high-level steps (set-backs) in its design. At level 18 this forms a 278m² private outdoor terrace for tenants, while two further steps are located on either side of the building at floor 21, forming what have been dubbed the structure’s shoulders.

Above the shoulders, one portion of the structure rises to the building’s full height. This contains a kitchen and back-of-house zone on level 23, while the remaining uppermost floors will house the Lantern restaurant that overlooks the city of Birmingham.

Summing up, Waheed Nazir, former Corporate Director Economy at Birmingham City Council, says: “103 Colmore Row is a massive vote of confidence in Birmingham. The commitment to this major new building will bring high quality office space to the heart of an expanding central business district and shows that Birmingham continues to be a hugely attractive place to invest and do business.”

103 Colmore Row is scheduled for practical completion in June 2021. 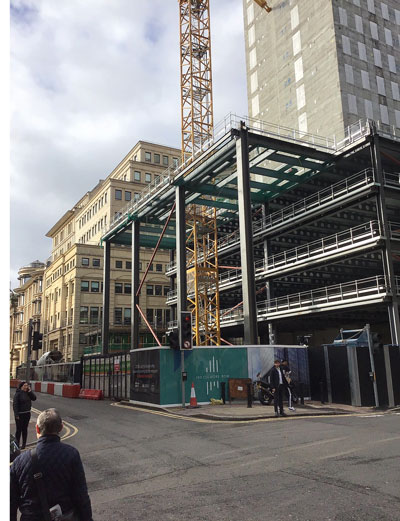 HISTAR® is produced by ArcelorMittal in S355 and S460. The advantages of ‘regular’ S460 over lower grades are clear – increased strength means comparatively smaller sections of lighter weight and more usable space. For rolled sections in compression, such as columns, a further advantage of S460 is that the buckling curves in BS EN 1993-1-1 improve by either one or two steps. In the critical minor axis, for rolled column profiles with a flange up to 100 mm, the specified curve improves from curve “c” to curve “a”, representing a significant increase in resistance.

If the member is fabricated by welding, Table 6.2 of BS EN 1993-1-1 specifies the same buckling curve for all steel grades. The “mega columns” at Colmore Row were fabricated from plate with twin webs – the advantage of S460 in this case is the increased strength.

The Carbon Equivalent Value (CEV) is a critical material characteristic when preparing welding procedure specifications – a higher CEV makes defect-free welds more difficult. The maximum CEV for HISTAR® S460 up to 63 mm thick is 0.41, which compares favourably with 0.47 for ‘regular’ S460 of the same maximum thickness.

Fabricated box sections offer opportunities to adjust the cross-section to suit the applied loading and buckling length in both axes. The disadvantages are the fabrication effort and for closed cross sections, the possible complexity of the connections. Connections to box sections are often via fin plates, or beam stubs, or by ‘blind’ fixings with access from one side only. 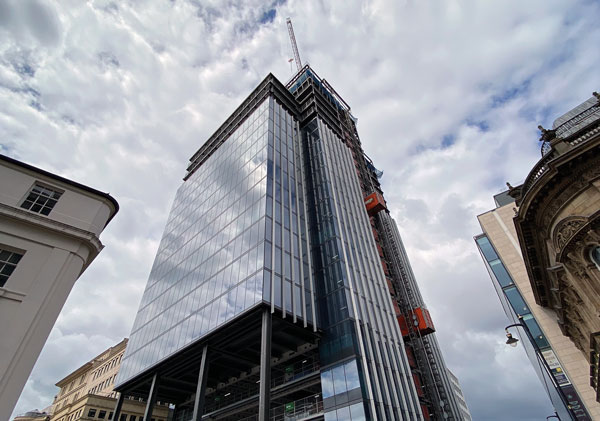