The SCI has developed state-of-the-art software SATEL (Structural Analysis Tool for Explosion Loading) for the analysis of single-degree-of-freedom (SDOF) systems subjected to explosion loads. The software is based on pioneering theoretical developments described in the Fire and Blast Information Group (FABIG) Technical Note 7(1) and provides analysts and designers with the practical means to perform explosion analysis without recourse to complex implicit or explicit non-linear finite element analysis (NLFEA).

SATEL allows designers to account for plasticity, large displacements and strain rate effects in their SDOF analysis of structural members and panels under explosion loading. It can be used in many practical applications where structures can be modelled as SDOF systems, such as blast walls and structural members or panels in buildings, ships and offshore platform decks. It enables designers to quickly assess the structural performance of the system, particularly at the preliminary design stage, leading to a substantial reduction in the costs for such analysis.

The software was developed as part of a Joint Industry Project and incorporates the following features:

Single degree of freedom systems are those in which the response of the structural element or system to an explosion is dominated by the first mode of vibration. It is restricted to structural systems which may realistically be simplified to a single mass on a spring.

The most widely applied SDOF model has so far been that of Biggs(2) which suffers from the following shortcomings:

The approach developed in FABIG Technical Note 7(1) overcomes the first four shortcomings of the Biggs model.

The problem characteristics and assumptions for the new SDOF model are as follows:

Further assumptions were made to facilitate the formulation of a relatively uncomplicated model which should nevertheless capture the essential problem characteristics:

The software functional requirements for SATEL were developed in conjunction with the partners on this Joint Industry Project (JIP), which included the Health and Safety Executive, defence technology specialist Qinetiq and blast wall manufacturer Mech-Tool Ltd.

The software was designed in a simple and easy-to-use format that guides the user through the various steps by providing ‘hover help’ messages relating to each input parameter. Graphical aids are included throughout to help the user in verifying the input data with warning and error messages, as appropriate, if the validation ranges for the parameters are exceeded.

Development followed the same rationale as other engineering software with input blocks for: 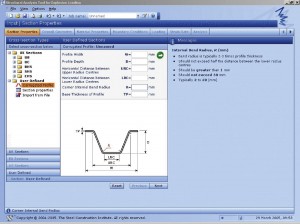 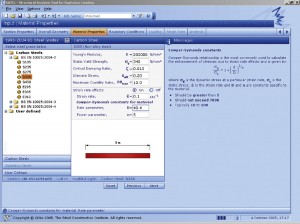 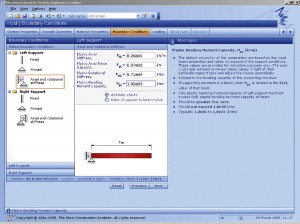 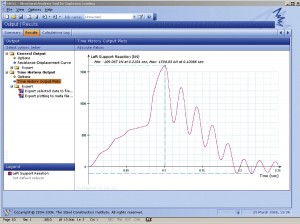 Three options are provided for the time- history variation of the load, namely:

• Analysis
• SATEL analysis screen allows the user to define the duration of the analysis and change the default time-step of 2.0 x 10-5 seconds

The user can export any of the time-history data to text files for further manipulation of data.

A user guide(3) and a theory manual(4) are available online for SATEL.

SATEL is available under licence from The Steel Construction Institute. For further details and information concerning the software, please contact Dr Viken Chinien (e-mail: v.chinien@steel-sci.com) at the SCI.

The development of SATEL was sponsored by the Health & Safety Executive, QinetiQ and Mech-Tool. Their support and help in the project is gratefully acknowledged.