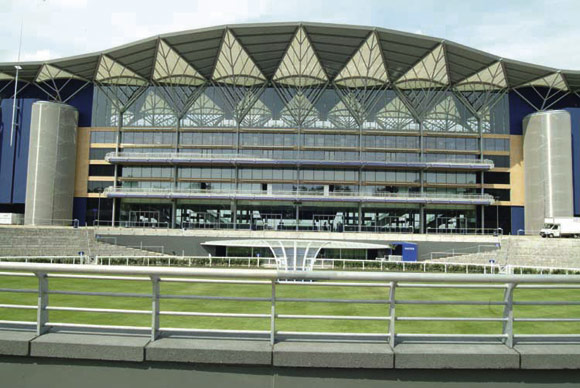 Over 180 guests heard presentations from guest speakers associated with the SCI since its early days, as well as a specially made video presentation involving key figures from the organisation’s history and presenting SCI plans for the future.

Guests were also treated to a tour of the Ascot Racecourse building which has been hailed as marking a new standard in racetrack facilities. SCI Chairman Peter Head welcomed guests, reminding them of SCI’s small beginnings when the £500,000 budget was guaranteed from British Steel for only three years.

SCI Director Graham Owens remembered that the first year saw six courses organised and 37 members recruited. By 1990 it was up to 263 members and the SCI’s reputation for producing practical, quality information of value to the constructional steelwork sector was quickly established.

Professor Patrick Dowling recalled how he had explained his idea for the SCI to British Steel Chairman Sir Ian McGregor. Corus Construction & Industrial General Manager Alan Todd told guests of the high regard in which SCI was held and pledged continued support to SCI and its objectives.

Industry links were strengthened with the establishing of the Steel Construction Industry Forum in 1992 bringing closer collaboration between SCI, British Steel now Corus, and the British Constructional Steelwork Association.

More diversification followed when interest grew in the environmental aspects of building design, and work was undertaken to scotch the myth that the mass of reinforced concrete buildings provided significant thermal cushioning. 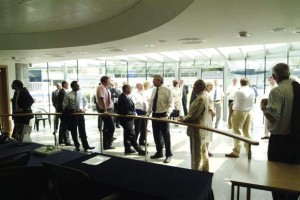 Guests inside the new stand

The year 2000 produced several milestones; over 500 companies had become SCI members, 22 publications were produced and 126 courses were run in one year. Significant investment in information and communications technology was made and work on the thermal performance of buildings intensified. Work was also carried on acoustic performance of steel framed buildings, particularly light gauge framed buildings. The dynamic response of lightweight floors was another area of research.

SCI always recognised the necessity of changes and had to be ready to change themselves. As such, in 2002 SCI grew its portfolio of work on sustainability, product development, best practice in construction and Information and Communication Technology (ICT). This resulted in the launch of Steelbiz electronic information system which has put all SCI’s formal knowledge on the web.

SCI has a well defined overall business strategy, with specific initiatives on:

With a new brand image, SCI will be focussing on five marketing directions:

SCI has all the ingredients to lead change and improvement in an outstanding industry, supported by our hardworking staff, our members and our sponsors.

Dr Owens concluded: “So, we have thrived for twenty years, in good times and bad. We believe we have made a very important contribution to a sector that is truly world class. We are very grateful to all our sponsors, especially Corus.”