Building envelope developments at the SCI

Research suggests that fears regarding the structural performance of deeper built-up cladding systems are unfounded, says  Dr Martin Heywood, Manager Construction Technology at the Steel Construction Institute, in this review of work underway relating to the recent Part L changes.

Changes to Part L of the Building Regulations (The Conservation of Fuel and Power), together with rapidly increasing energy prices, have led to a change of emphasis within the design process for steel-framed buildings to the point where ensuring structural safety and efficiency is no longer the most onerous aspect of the design process. Indeed, obtaining approval for the structure is now a routine occurrence for many common forms of steel structure and the focus of Building Regulations compliance has now shifted to the building envelope and, in particular, its energy performance. This change of emphasis is reflected in the nature of the research projects currently in progress at Steel Construction Institute (SCI), as illustrated by this paper

Until recently, compliance with Part L of the Building Regulations was defined in terms of the thermal transmittance (U value) of individual building elements and the air tightness of the building. Traditionally, U values were seen as the primary means of improving thermal performance, resulting in a gradual increase in insulation thickness over several years to meet the ever stricter requirements. Limits on air leakage were also included in the Approved Documents, but were not strictly enforced in practice. By contrast, the 2006 revision of Part L requires designers to consider the performance of the whole building, rather than the thermal properties of the individual elements.  Compliance with the Regulations must be demonstrated using a national whole building calculation model; for non domestic buildings the Simplified Building Energy Model (SBEM) or approved alternative should be used.

The SCI is currently engaged in several projects relating to the 2006 amendment to Part L of the Building Regulations and its impact on various types of building. This work combines desk studies using SBEM, which aim to identify the aspects of building design that have the greatest impact on the building’s energy performance, with an assessment of real buildings through the evaluation of test data. Although much of the research is still in its infancy, a few key issues have already been identified, including the importance of good interface detailing in achieving airtightness and the need for good workmanship on site.

Changes to the Building Regulations over recent years have significantly reduced the maximum permissible elemental U values resulting in a considerable increase in insulation thickness.  This has had important implications for the structural performance of the cladding system and its relationship with other structural elements. 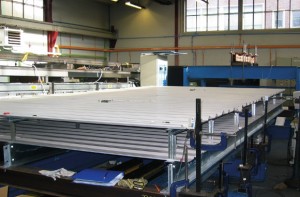 In particular, concerns have been expressed in the past regarding the ability of deeper built-up roof cladding systems to safely transmit the down-slope component of the gravity loads to the supporting purlins and to adequately restrain the purlins against lateral-torsional buckling in the case of wind uplift. Both of these issues have been comprehensively investigated by the SCI as part of a ‘Partners in Innovation’ project jointly funded by the DTI, Corus Strip Products UK, the MCRMA and EPIC. In addition, the SCI and Corus Colors have recently undertaken a series of tests to support the existing analytical evidence and provide much-needed data on the interaction between cladding components (see Figure 1).

In general, the results obtained from the tests and analytical work suggest that fears regarding the structural performance of deeper built-up cladding systems are unfounded. Despite the increase in depth, there is evidence of good interaction between the outer sheet and liner under gravity and uplift loading, providing a safe load path for down-slope loads and restraint to the purlins. However, the structural performance of the cladding cannot be taken for granted and must be afforded the same degree of design as any other element in the building structure.  In the case of built-up cladding systems, this means the correct specification of the two profiled sheets, the spacer system and supporting secondary steelwork

Many factors affect the air tightness of a building, including the choice of cladding products, detailing at joints and interfaces, the specification and erection of the supporting steelwork and, of course, the installation of the cladding itself. 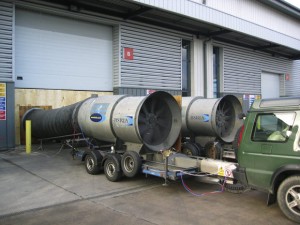 Research conducted by the SCI suggests that an important potential source of air leakage through the building envelope is excessive sag in the supporting purlins or side rails, preventing the cladding installation contractor from fixing the cladding panels or sheets correctly and achieving the necessary airtight seal. Poor seating of the cladding on the purlin flange can also have implications for the structural integrity and non-fragility of the building envelope.

The SCI has played a key role in assembling a team of technical experts from across the range of disciplines involved in the specification and installation of the building envelope and has proposed limits on purlin and side rail sag suitable for built-up cladding and insulated panels. These suggested values, together with practical guidance for specifiers and installers, will be published shortly in the forthcoming SCI publication SCI-P-346 Good practice guidance for cladding of industrial buildings.

The latest changes to Part L of the Building Regulations are likely to have a significant impact on the design and construction of all buildings in England and Wales, with building designers having to consider the performance of the whole building, rather than individual elements of the structure and envelope. With these changes, the role of the structural engineer is also likely to expand to include a greater consideration of the building envelope and the steelwork that supports it. As with all areas of structural steelwork design, the SCI is actively involved in research and development activities relating to the building envelope and will be producing detailed guidance over the coming year.