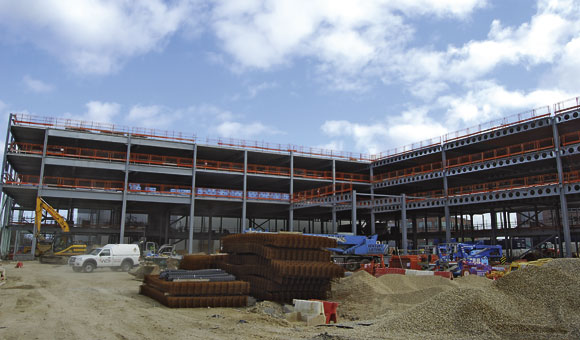 Three levels of car parking sit above the Smartlab

The redevelopment of B&Q’s main headquarters has begun with the erection of a large office, laboratory and car park structure. For maximum efficiency and the need for large open areas, steel was chosen as the framing material.

The DIY specialist outlet B&Q is currently redeveloping its headquarters site in Eastleigh, Hampshire. The project involves the demolition of all existing buildings and the construction of new offices, a laboratory and a new car park.

Phase one of this scheme consists of a 4,645m² steel-framed building, measuring 72m x 96m, which will contain two floors of office space, a laboratory (known as a Smartlab by B&Q) with three levels of car parking on top.

Because of the constraints of the site, a number of very different functions are stacked in order to use the space as efficiently as possible. The interdisciplinary design team explored a multitude of options to reduce the complexity and proposed a steelwork solution to meet the challenges of span, structural depth and environmental performance. 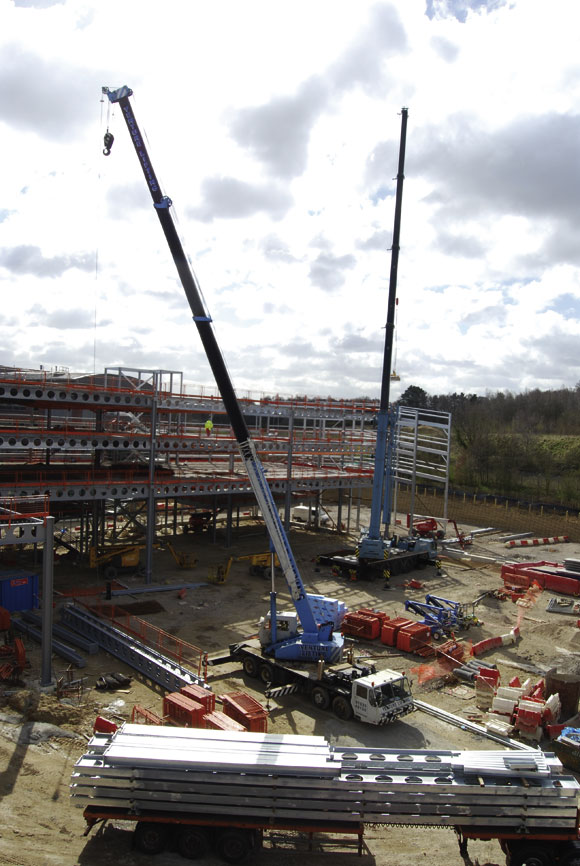 Barrett Steel has installed both steelwork and concrete planks

The footprint of the sizeable building, which is under construction, will have two levels of office accommodation which wrap around in an L-shape along two elevations. This leaves the majority of the lower levels for the Smartlab which is a large double-height space.

Smartlab is B&Q terminology for an area where displays are readied and dressed prior to going out to the company’s numerous stores. Products are delivered via a loading bay located at the rear of the building and stacked and arranged on shelves. To accommodate the Smartlab’s superstore-sized shelving units this area of the building’s ground floor has to have the same headroom as a B&Q store.

Interestingly, the three levels of car parking, which sit directly above the office space and Smartlab, have dictated the design of the overall building. The need to arrange columns in a typical car park 16m x 7.2m grid means the majority of the building’s steel frame has been constructed around this same pattern.

“Transfer structures below the car park would have been the alternative,” explains Richard Beesley, Technical Director for Barrett Steel Buildings. “But that would have been an expensive option so the decision was taken for long spans throughout.” Cellular beams have been used for all of the 16m spans, as these sections were considered the most efficient and cost effective steel members.

Another important consideration, and one which also had a direct influence on the structure’s design was the delivery of large and heavy goods to the Smartlab. Many similar type buildings have a car park on the lower levels and the offices above, however with regular truck deliveries to the site, the configuration with car park above offices was deemed the most suitable.

As the three levels of car parking are exposed and the lower levels (containing the lab and offices) needed to be kept warm, a solution was required as to how to insulate the dividing second floor slab.

“Encasing the steel beams would have been very time-consuming,” explains Erik Dirdal, Structural Engineer for BDP. “We’ve actually put the insulation on top of the steelwork and precast planks which again was the most cost efficient way and ultimately gives the client what it wants.”

The insulation for the second floor slab takes the form of a large sandwich with layer upon layer of materials. The make-up of the construction consists of steelwork beams, precast concrete planks, structural topping, a light screed, and finally an asphalt topping. This then forms a thermally insulated box for the lower levels of the building. The second floor slab is also the point where the main columns are spliced, with members capped below the slab and the thermal insulation with a base plate for the upper member on top. 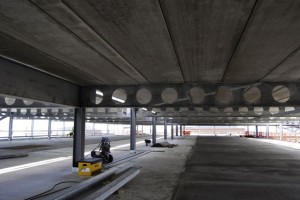 The large open spans required for the car park 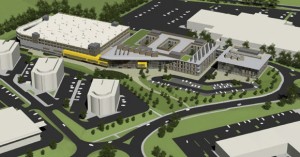 Construction on site began last year when the main contractor cleared the plot ready for the Smartlab. An existing B&Q building was demolished and steelwork erection was able to start in January, with completion set for this May.

Steelwork contractor Barrett Steel Buildings has also installed the project’s precast planks as this means one less trade on a rather confined site and better sequencing and coordination, especially with craneage.

“We started installing planks about 10 days after steel erection began,” explains Stuart Bew, Barrett’s Senior Site Manager. There are two mobile cranes on site and working with these two units we had to have one complete zone of the building up to full height before planks could start going in,” he adds.

There has also been a selection of mobile cranes used on site, varying from 35t capacity units up to 100t, utilised for both steel and precast plank installation.

Steel deliveries have generally been made in 20t loads and in a just-in-time schedule. As the building progressed the available space for materials storage got smaller so the delivery sequence became more important.

“It was all about keeping both the steel and the planks going up in an economical fashion,” says Mr Bew. “We were doing 60 planks a day at the peak.”

Aside from the long cellular beams, the main structure is an efficient column and beam construction, although there is a feature cantilever containing the conference facilities at first floor level. One elevation also features a two-way steel-framed ramp for the car park.

As the overall structure is steel framed, stability is derived from five steel framed cores containing lifts and staircases. Steel bracing, positioned in walls and within the floor void provide additional stability.

Once the Smartlab is operational an adjacent office block will be demolished, making way for a new headquarters to be built. Due to be fully operational by spring 2011, the project will bring all of B&Q’s 1,400 head office employees together under one roof.