Primary schools in the frame 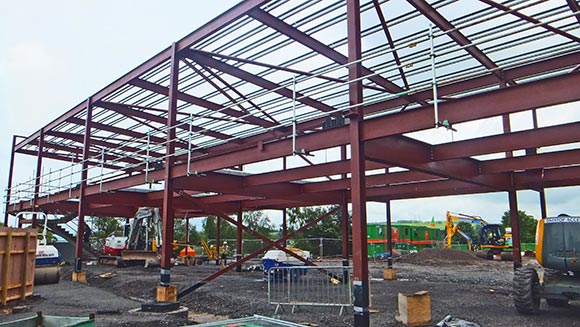 Two primary schools in Perth have reaped the benefits of having structural steel frames.

Main contractor BAM Construction is building both Oakbank Primary School and Crieff Primary School for Perth and Kinross Council as part of its capital investment programme that is being delivered through Hub East Central Scotland.

Both new schools have been designed as steel-framed structures and are being constructed simultaneously, with Hescott Engineering Co erecting 385t of structural steel for the projects, as well as installing metal decking and precast stairs. 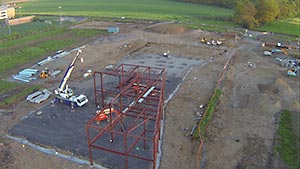 A number of factors favoured the use of structural steelwork for the project’s framing material says Craig Heap, Holmes Miller Project Architect. “It’s a tried and tested method with the benefits of a quick construction programme, flexibility of design, while the material lends itself to forming the long spans that were needed in the gyms and assembly halls.”

Jim Travers, Blyth+Blyth Director, agrees and adds: “There’s always a strong preference for using steel for schools as flexibility of design is important. Schools quite often have a number of end-users and so the building’s configuration may need to be altered and this is easier with a steel frame.”

The steelwork for both schools gets its stability from bracing, located in partition and exterior walls and stair cores. The need for flexibility meant that during the design process a lot of thought had to go into where bracing could and could not be placed.

“The bracing locations were dictated by the size and use of each classroom,” adds Mr Travers.

Avoiding any clashes and making sure the entire design team agreed on all aspects, including bracing locations, was aided by the fact that all parties took a BIM approach.

3D Revit models of both schools were produced early in the design process and the architect, main contractor and the structural engineer all used them. Later the same models were passed onto Hescott Engineering Co who then used them to design the steel connections.

Primary locations
Located on the playing fields of the existing school, the new 4,000m² Oakbank Primary will include an integrated nursery, roof terrace, learning resource centre, a general-purpose room and break-out areas around the main flexible teaching spaces.

Predominantly two-storey, Oakbank is square-shaped in plan with four protruding classroom finger blocks attached to the main structure. The steel frame is based around a fairly regular 8m × 8m grid pattern, with the only exception being 19.7m spans for the school’s gym and assembly hall. This area has a sliding partition that allows it to be divided into two separate halls. 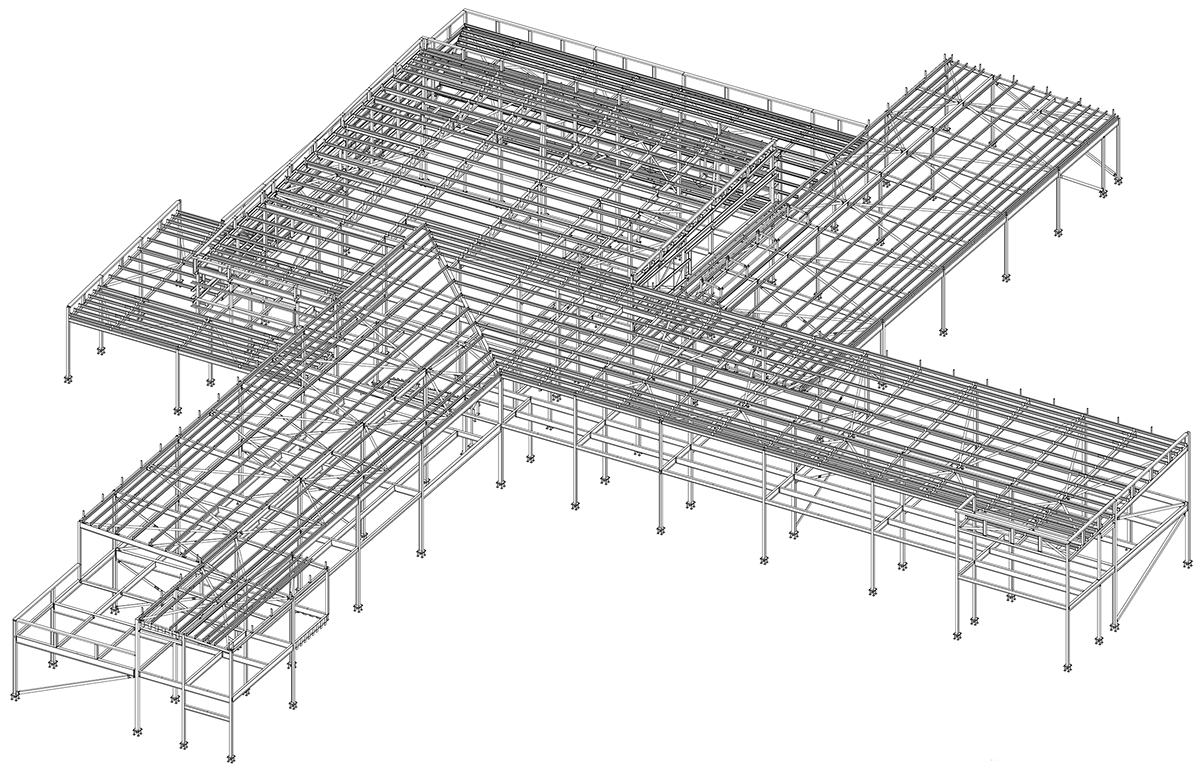 Below: Steel model of Oakbank School showing its configuration based around a central hub

“Oakbank is the more complicated of the two projects as far as logistics are concerned,” says Martin Cooper, BAM’s Construction Director. “As we are working adjacent to a functioning school vehicle movements and material deliveries have to be timed in order to cause minimal disruption to pupils and staff.

Once the new Oakbank Primary School is completed the existing school will be demolished to make room for new playing fields.

Meanwhile, the Crieff Primary school project is being built on a greenfield site on the outskirts of Perth. 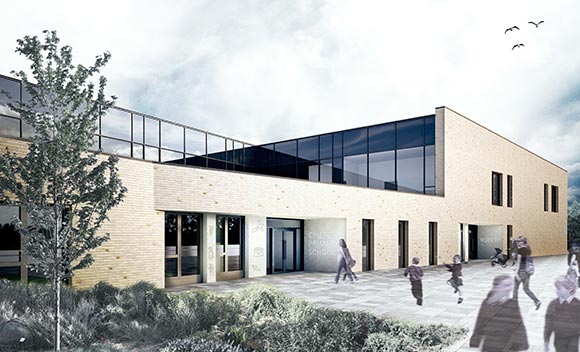 With a similar two-storey steel design to Oakbank, the Crieff Primary School is however rectangular in plan, with many of the teaching spaces set around a central gym/assembly hall and a one-storey entrance hall.

A standard grid pattern has also been utilised on this project with the longest spans – 19.8m – occurring in the sports hall.

This primary school and nursery will be complemented by associated facilities including sports pitches, multi-use games area and playground. Biomass boilers will provide heating and hot water and reduce the carbon footprint of the new school.

Both schools are scheduled to open in time for the 2015 autumn term.

Prior to beginning work on the Perth primary schools Hescott Engineering purchased a new FICEP Endeavour drilling and sawing line and claims it helped double production with the faster speed and improved technology provided by the new machine.

Chris Scott, Hescott Engineering Director, says: “The Endeavour’s advanced capability and the extra 250mm axis on the drilling machine, combined with improved speed of the FICEP Katana sawing system, has not only provided a substantial boost to our productivity but is giving us a welcome extra competitive edge in the Scottish market.

“One particular job that used to take 30 minutes now takes only eight minutes with the Endeavour.  With its power and innovative features, the new line is a game changer for us in terms of capacity and quality.”