Paper making gets a boost 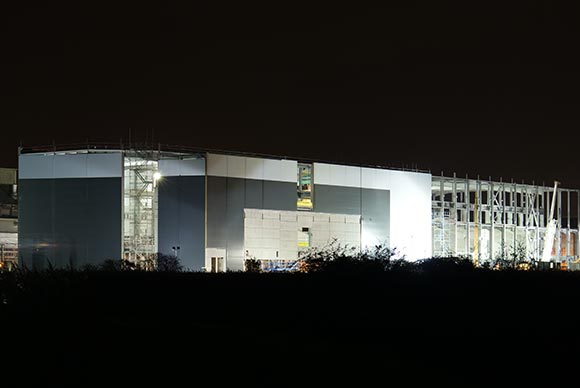 One of Kent’s oldest industries is expanding with the aid of a new steel framed manufacturing hall.

Kent’s Medway Valley has a long tradition of paper making and today a number of mills are still in existence, supporting the local economy and producing a sought after and valuable commodity.

One of the oldest and largest mills is the Townsend Hook Paper Mill at Snodland near Maidstone. Owned by the Smurfit Kappa Group, the site has been manufacturing paper for more than 150 years and this tradition is set to continue as a £98M investment programme nears completion.

The installation and commissioning of a custom designed container board machine is due to be completed and operational by the end of this year. The machine will produce lightweight corrugated packing from recycled material and, once up and running, it will secure the supply of paper for all of Smurfit Kappa’s packaging operations in the UK and the Republic of Ireland.

The new equipment will replace two existing container board machines, increasing the mill’s capacity of recycled paper per annum by over 8% from 240,000 to 260,000 tonnes.

Chris Allen, CEO of Smurfit Kappa Paper UK, comments: “This investment in the current financial climate shows our commitment to the UK, Ireland and pan-European customers of our products.

“The design of the new machine means the mill will offer the most sustainable approach to packaging in the UK.” 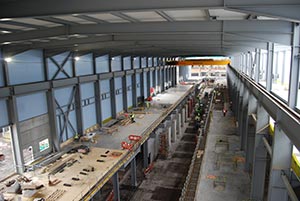 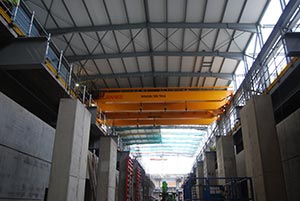 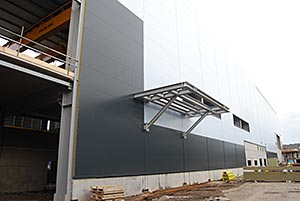 Plant equipment brackets are attached to the outside elevations

In order to accommodate the new machinery a large steel framed building along with a number of smaller ancillary steel structures are being constructed.

Atlas Ward Structures has been contracted directly by Smurfit Kappa to fabricate, supply and erect 2,200t of structural steelwork for the project. The contract also includes the installation of precast floors and walls, as well as supply and erection of 14 steel stairs and a further four steel stair towers.

The largest part of the construction programme involves the new main paper mill building that is 162m long and has a span of 32.7m. This large portalised frame is formed with a series of 22m high 914 UKC sections spaced at 6m centres.

Two 50t capacity overhead gantry cranes will serve the entire length of the building. These will operate along rails supported on steel beams connected to the main columns 15m above ground level.

Internally the building also features an 8m wide mezzanine level that extends the full length of one elevation. On the opposite side of the building an 8m wide lean-to structure connects to the main frame and extends along this elevation for 25m. To be used as a plant zone, the lean-to has two levels and overlooks the main hall.

The lean-to and mezzanine create a large void in the centre of the building into which the majority of the new container board machinery will be installed.

Because of potential vibration issues due to the amount of heavy machinery to be installed, the structure’s floor slab, mezzanine floor and annex levels all have a floor thickness of up to 450mm. To support the heavy mezzanines, the same large 914 UKC’s, as used for the building’s perimeter, have been erected to support these floors.

“The connections are large and very complex due to the onerous loading from the paper machines and associated M&E services,” says Mr Hall.

“To further mitigate against vibration all of the columns have been erected on fixed bases with up to 100mm thick base plates.”

Using a 90t and a 50t capacity mobile crane, Atlas Ward erected the majority of the steelwork during a 15 week programme. The company also installed precast floor and wall units at the same time, minimising the overall erection period.

Prior to the steelwork programme beginning, the ground had been prepared by Keller and the principal contractor Raymond Brown, work that included the installation of 1,000 piles.

Atlas Ward constructed the building and lean-to simultaneously, working from one gable end to the other. Once each 6m wide bay was erected, the company then installed the precast floor units and walls.

Braced bays provide stability for the frame, although the initial gable end of the structure had to be propped during erection. This temporary support was then dismantled once a few bays had been completed which allowed the partially erected structure to be self-supporting.

The longest steel elements within the steel frame are the roof rafters for the main hall. At 32m long they are formed from two 16m long sections that were bolted together on-site and then lifted into place by Atlas Ward’s 90t capacity mobile crane.

During February Atlas Ward revisited the site to erect the smaller buildings around the site including a stock prep unit, a control building and a conveyor belt link from the new paper mill building to the site’s existing facility.

As the Chancellor of the Exchequer, George Osborne MP commented after meeting local MP, Tracey Crouch: “The investment in the mill is a vote of confidence in the UK economy and will maintain the historical link between Snodland and the paper making industry.”