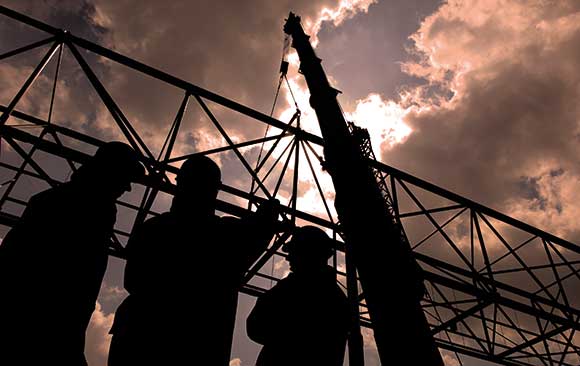 The first truss, measuring 125m, was lifted into place during a day-long operation.

Not far from the main runway and within sight of the passenger terminal at Stansted Airport, a new hangar and flight simulator centre for low-cost airline Ryanair is rapidly taking shape.

This purpose built facility, which measures approximately 125m x 58m, has been designed to support a diverse range of operational requirements under one roof, and is capable of accommodating up to five Boeing 737 NG aircraft at any one time. 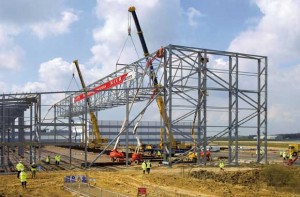 The first truss allowed the next two to be braced back to a rigid box.

With a maximum height approaching 25m, the cavernous interior of the maintenance hangar is supported by a series of structural steel trusses, designed and fabricated by Barrett Steel Buildings.

Prior to installing these large steel sections, Barrett Steel Buildings, which has a design and build contract for all of the project’s structural steelwork, erected the framework for the structure.

Chris Heptonstall, Associate Design Director at Barrett Steel Buildings, said the first part of the new building to be erected was the portion furthest from the runway, which includes a three-level office section and training facility.

“By working from the back to the front we allowed all the follow trades to get an early start,” he explains.

Once the framework for the structure was erected, including large 25m-high columns to support the trusses, a multi-crane lifting operation was able to begin.

The trusses form the roof and entrance area of the hangar and were designed around the ability to be lifted accurately and safely within a very tight build window.

While the office and simulator area of the structure was being erected Barrett was simultaneously assembling the trusses. 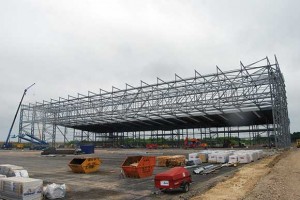 The hangar will be able to house five 737 aircraft.

A total of 18 staged skids (trestles) were laid out on the ground to support the trusses as they were bolted up from small loads brought to site piecemeal.

“We wanted a rigid box which would then enable the following two trusses to be braced back to it securely,” adds Mr Heptonstall.

Two more lifting operations have taken place to install the second and third trusses. These large sections were also assembled at ground level, but in three equal lengths. They were then lifted individu- ally, by one of three 100t capacity mobile cranes, and spliced together while suspended in the air.

While the three sections of the truss were being spliced together another 25t capacity mobile crane was used to install the bracing which connects trusses back to the rigid box which was initially erected.

The roof trusses are all pre-cambered to take out the dead deflection and all connections are friction grip using TCB bolts.

“We chose TCB’s for their speed of fixing and the surety that the full slip potential was guaranteed,” adds Mr Heptonstall.

All the trusses were fabricated 50mm short of the supporting columns, and specially designed packs were installed to make up the difference during installation. 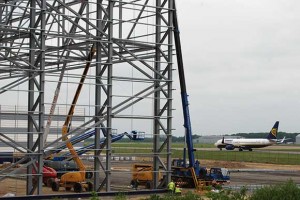 Prior to the installation of the trusses, the steel frame was fully erected.

The three full day lifting operations were the highlight of the steelwork erection, but before this Barrett had, as previously mentioned, already constructed the entire braced frame of the hangar and office area, while main contractor Kier Eastern has undertaken a month-long earthmoving operation.

“The site is basically a greenfield site, but a lot of overburden had to be shifted to form a level surface,” says Kier Eastern Project Manager Mark Lockley. “We also prepared a hard-standing area and piled foundations over the majority of the footprint to allow steel erection to begin in March of this year.”

The rear of the structure will house three-levels of Ryanair offices, workshops and crew training facilities, including flight simulators.

The office areas are divided into two main areas which are connected by second and third level walkways, which by-pass the flight simulator and training areas.

There was not a requirement for a large column free area at the rear of the hangar as there is at the front. “But we’ve still installed some 10m-long 610 x 229 beams to accommodate the spans over the simulators,” explains Mr Heptonstall.

“We are also erecting the warehouse,” sums up Mr Heptonstall. “This two span structure will be completed in early June and will be the final stage of our steelwork package.”