Museum will recall a divided world 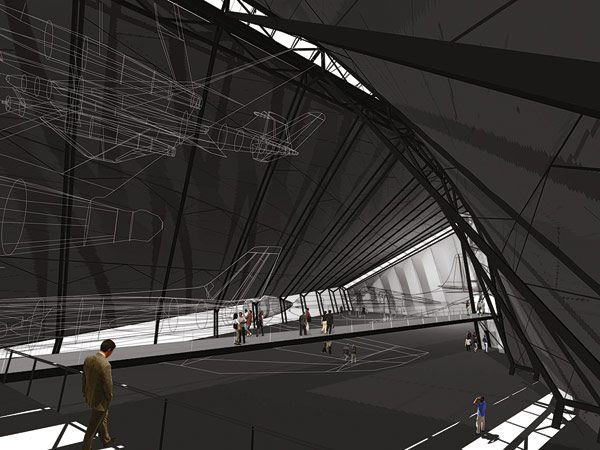 Steelwork erection has begun on a new £11.2M building for the RAF Museum Cosford in the West Midlands, designed to conserve and house many of the museum’s of historic aircraft in a building of architectural merit.

The structure, by architect Feilden Clegg Bradley with structural engineer Michael Barclay Partnership, is split into two triangular spaces by a spine wall. Steel trusses fabricated in circular hollow section at 9m centres span from the ground floor to the apex of the roof where they meet a spine truss running the length of the building. The trusses slope at varying angles of inclination up to almost vertical, creating a double curved roof.

Steelwork contractor SH Structures began assembly of the structure on site with the two vertical ends of the building, formed of ladder trusses with beams spanning between them. The inclined trusses will follow, with the spine truss assembled between them a bay at a time. “The largest truss is 63m long and will be transported to site in three sections,” said SH Structures Estimating Manager Peter Redfern.

The building, 135m long and 30m high and providing a display area of 6320m², will house an exhibition on the Cold War, Divided World:Connected World. It will feature aircraft from the period, including all three V-bombers, the Valiant, Victor and Vulcan.

Erection of the 730t of steelwork is expected to take 16 weeks, and the project is scheduled for completion in 2006.