Posted on October 10, 2019 by NSC in Certificate of Merit, Projects and Features, SSDA Awards 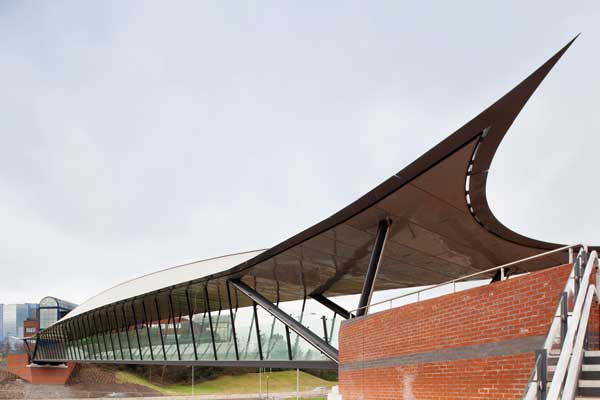 Replacing an older structure that had reached the end of its working life, Telford’s Central Footbridge replacement scheme provides a new and important link between the railway station and town centre.

Two steel arched structures with an underslung suspended deck connected by a central hub provide a new and improved link between Telford railway station and the town centre.

Previously the route, which crosses both railway lines and a road, had been served by a single span steel truss structure, but this bridge had reached the end of its working life and was too costly to maintain.

The use of steel as a structural solution for the new structures was recognised early in the design stage as the material has an efficient span-to-weight ratio and it benefits from safer, cost-effective offsite construction techniques.

The selected cranked alignment, parallel to the existing link, enabled the new bridge to be built while maintaining the use of the existing structure, thereby causing the minimum amount of disruption to its users.

The new structures are both based on a single-span lenticular space truss roof, fabricated from steel circular hollow sections. The railway structure is 27m-long and the larger highway structure is 90m-long.

The steel decks are supported from the truss system on hangers. For the larger bridge, the deck also acts together with the roof truss and raking end members to create a tied arch supported on piled concrete abutments, faced with blockwork.

“Coordinating the multiple interfaces between the various materials used on the structures was a significant challenge.

The bridges feature a primary tubular steel arch structure with a tensile fabric roof, a GRP soffit and glazed sides, all of which had to fit to exacting tolerances,” explains S H Structures Sales Director Tim Burton.

Installing the structures on this busy and constrained site was a major challenge.

The Balfour Beatty team worked closely with the client and other agencies to develop a suitable logistics plan. Assembly areas were established adjacent to the railway and Rampart Way where the two substantially prefabricated bridges were erected on bespoke temporary works.

The smaller railway span was successfully installed during an overnight road and rail closure in July 2018. The client and main contractor promoted the project in the local press and via social media and this resulted in a large crowd gathering to watch the spectacular installation of the larger road span. This structure was successfully lifted into place on 17th September 2018.

“Lifting the larger 90m span bridge into place during a limited night-time operation was a challenge which required meticulous planning and attention to detail to ensure the structure was installed safely and within the allotted time slot,” says Mr Burton.

Summing up, the judges say these new footbridges provide a modern sleek welcome to visitors arriving from the railway station. Crossing busy roads and a railway line on a tight site presented major challenges, but disruption was kept to a minimum and the judges were impressed with the team’s efforts to engage and involve the public, resulting in a proud sense of ownership by the local community. 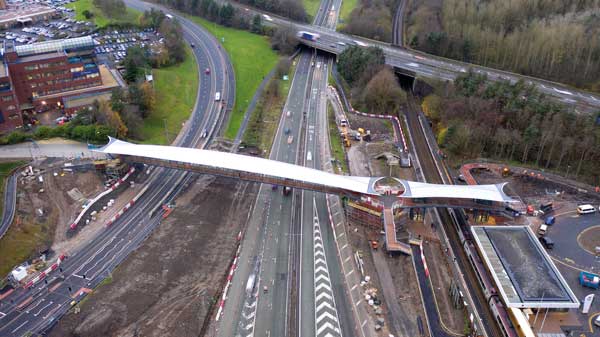