Matters of principle – Part one

In this two part article Alastair Hughes examines the distinction between Principles and Application Rules, which is dear to the heart of the Eurocodes

Introduction
All engineering is based on scientific principles, but in practice other, less pure, influences come to bear. Arguably our Design Standards would not be needed if principles alone were sufficient. But safety factors, to take one all-pervading example, are based on experience and judgement – the principle that there should be an adequate margin of safety versus collapse needs to be given quantitative effect. In setting these factors, code committees need to allow not only for natural uncertainties but also for some artificial ones: the myriad aberrations from truth-to-principle that result from simplifications and approximations that are routinely made in practical design. A course has to be plotted between hair-splitting attention to detail and cavalier disregard for influences that are not as petty as might be imagined. Individual designers, be they ever so responsible, prefer not to decide where to draw the line. Society would agree. This is, in essence, why we have Design Standards (codes, if you prefer) and give them quasi-biblical status. 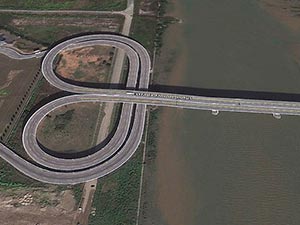 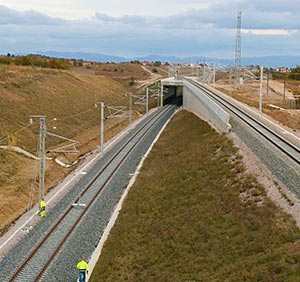 Flyover for high speed line near the France – Spain border

Principles and Application Rules
It is a Principle that opposing streams of traffic should keep to different sides of the road.

‘Keep left’ is an Application Rule. ‘Gardez la droite’ or ‘Rechts halten’ is another. The same immutable Principle can be – indeed is – applied in different but equally valid ways. This almost too perfect example demonstrates that Application Rules can be in conflict with one another but not with the Principle. National choice and force of habit (or Napoleon, or Hitler) can influence the Application Rule, but the Principle ought to be immune. This one is actually enshrined in a Geneva Convention.

Application rules can be changed, and in an ideal world it can obviously be beneficial to harmonize them. Back in 1972, Nigeria, surrounded by countries which drive on the right, took the decision to do the same. At the time, the changeover was relatively painless. Much of the population had never seen a traffic light and the nation had just acquired its first few miles of divided road. It would be different today.

It’s probably too late for Hong Kong and Macau to harmonize with mainland China (which itself changed over as recently as 1946).

Our world of steel construction is not so black and white but shouldn’t the same principle apply: Principles are sacrosanct and must always be adhered to, whereas Application Rules are man-made, for convenience, and to some degree arbitrary?

In theory, maybe, but practice isn’t that simple. The function of Application Rules is often to legitimize simplifications and even neglect of Principles. For example, it might be stated as a principle that interaction of axial and shear forces should be taken into account when verifying a beam cross section. Yet code rules permit appreciable amounts of both to be disregarded. On the other hand, can a designer afford to ignore the principle of equilibrium? Clearly there are principles and Principles. And even some ‘high’ principles may not be as immutable as first thought.

Take the idea that truss member centrelines should node concentrically at a joint. An expression of equilibrium, it might be said, except that the words ‘but in practice…’ are not far behind. More often than not it is advantageous, on balance, to sacrifice this principle in favour of joint performance, buildability or both. Which code rules permit, within limits.

Eurocode Philosophy
The Eurocodes take the distinction between Principles and Application Rules very seriously. Right at the start we read, or are referred to, something very similar to the following extract from EN 1990:

1.4 Distinction between Principles and Application Rules

(1)    Depending on the character of the individual clauses, distinction is made in EN 1990 between Principles and Application Rules.

–    general statements and definitions for which there is no alternative, as well as ;

–    requirements and analytical models for which no alternative is permitted unless specifically stated.

(3)    The Principles are identified by the letter P following the paragraph number.

(4)    The Application Rules are generally recognised rules which comply with the Principles and satisfy their requirements.

(5)    It is permissible to use alternative design rules different from the Application Rules given in EN 1990 for works, provided that it is shown that the alternative rules accord with the relevant Principles and are at least equivalent with regard to the structural safety, serviceability and durability which would be expected when using the Eurocodes.

NOTE If an alternative design rule is substituted for an application rule, the resulting design cannot be claimed to be wholly in accordance with EN 1990 although the design will remain in accordance with the Principles of EN 1990. When EN 1990 is used in respect of a property listed in an Annex Z of a product standard or an ETAG, the use of an alternative design rule may not be acceptable for CE marking.

(1)P  A structure shall be designed and executed in such a way that it will, during its intended life, with appropriate degrees of reliability and in an economical way

–     sustain all actions and influences likely to occur during execution and use, and

–     meet the specified serviceability requirements for a structure or a structural element.

Another example of a Principle in EN 1990 is immediately following clause 2.1(2):

(2)P    A structure shall be designed to have adequate :

It is quite interesting to compare these two Principles. They seem almost to duplicate one another, but the first includes a requirement for economical design, a laudable objective which is arguably not altogether fulfilled by some highly praised structures. 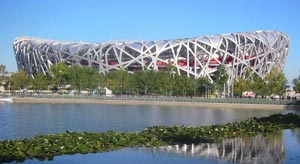 Is architectural extravagance ruled out by EN 1990?

The second clause is more concise, but it does include a requirement for durability. In the first, the words ‘during its intended life’ might be considered to cover the same ground. But durability, like serviceability and economy, is assessed in a relatively subjective manner.  We might have misgivings about elevating these to the same level of importance as resistance, but concede that they are all principles we pursue in structural design. Sustainability, which has entered the vocabulary since EN 1990 was written, can surely be expected to join them in the next edition.

P  Actions shall also be classified

–     by their spatial variation, as fixed or free, or

–     by their nature and/or the structural response, as static or dynamic.

Most of us would regard it as optional and often unnecessary to classify our actions in this manner, and, incidentally, question the word ‘or’ – cannot an action be direct, fixed and static? But the point is that this is a ‘Principle’ we could do without.

An example of an Application Rule that could have been labelled a Principle, but wasn’t, is clause 6.5.3(1):

The combinations of actions to be taken into account in the relevant design situations should be appropriate for the serviceability requirements and performance criteria being verified.

Incidentally, it is unclear to the reader (if not also the authors?) whether there is a category of clauses which are neither Principle nor Application Rule. EN 1990 1.4(6) (see first of the extracts above) declares itself to be an Application Rule, so are we to presume that all such clauses (the ones with a number in brackets, but lacking a ‘P’) are too?

The opportunities for quasi-theological analysis might seem endless, but thankfully technical articles in NSC are not.

In Part Two attention will be focused on Principles and Application Rules in the Eurocodes for steel structures.