Posted on October 12, 2017 by NSC in Technical, This month's featured stories 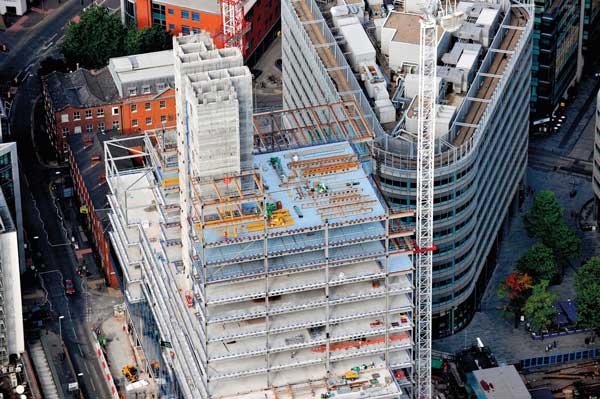 Richard Henderson of the SCI discusses the design of plates cast into concrete to connect to steel beams and the forthcoming SCI design guide.

Introduction
It is a truth universally acknowledged, that a simple beam in proximity to a concrete wall, must be in want of a cast-in plate… Wandering around cities examining construction activity, one cannot but be struck by the number of buildings in which the lateral stability system is provided by concrete cores and the floor beams and columns are structural steel. It is perhaps surprising that until now there has been no design guide for cast-in plates available in the UK.

What do cast-in plates do?
The floors that surround concrete cores are supported on steel beams that in turn are supported by the core walls. Steel plates are cast into the wall during construction and subsequently, as the steelwork is erected, connections are made to the cast-in plates. The connections carry the design loads from the beams: the vertical reaction at the end of the beam and possibly a horizontal force (e.g. from wind loads on the façade and a separate tie force for robustness). The cast-in plates must therefore transmit these forces into the concrete walls through shear studs, reinforcing bars, anchor plates and the like, fixed to the back of the plate and embedded in the concrete.

Simple Connections
Many steel buildings in the UK have been designed with braced frames providing lateral stability and simply supported beams carried by the steel columns. Standard connections have been developed which are able to resist the vertical reaction at the end of the beam but are sufficiently flexible to allow the beam to take up the end slope corresponding to a simple support. The connections are also capable of resisting the horizontal tie force required to provide adequate robustness, in a separate load case. The details are published in the SCI ‘Green book’, publication P358 . Various types of connections are included: partial and full-depth end plates and fin plates. Tests on connections to beams up to 610 serial size have been carried out to demonstrate the behaviour of the connections.

Coexistent shear and tension
Connections may be required to carry shear and axial force in the same load case. Where beams are supported on inclined columns, significant horizontal forces may be developed. If risers for building services are grouped round a concrete core, the floor slab may stop short, leaving no opportunity to transfer horizontal forces through the floor slab. In such cases, the connection falls outside the details in the ‘Green Book’ and the connection must be designed from first principles. The ability of such a connection to rotate to relieve a fixed-end moment while carrying a significant horizontal force must be carefully considered. 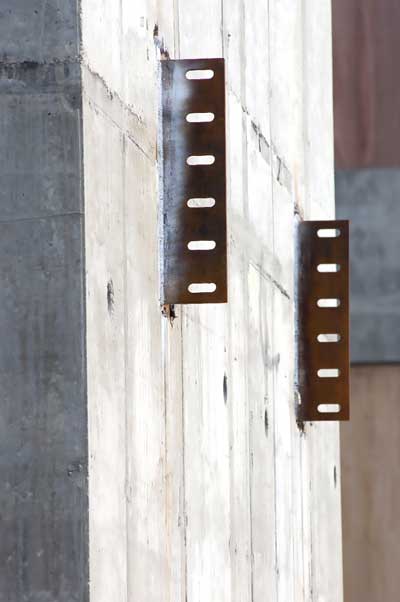 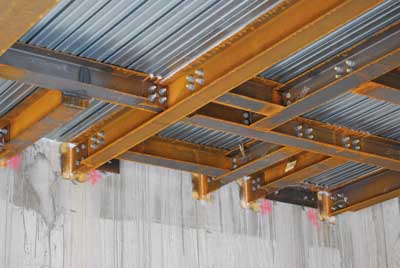 Connections to cast-in plates
Where a building has been designed with simply supported beams carrying shear and no horizontal forces and with tying forces in a separate load case, connections can be taken from the ‘Green Book’. A common form of connection is a fin plate welded to a cast-in plate. An end-plate connection could be formed by welding a Tee to the cast-in plate, but such an arrangement where a beam has to be erected between two vertical surfaces may make the steelwork less easy to erect than with a fin plate. If at all possible, it is preferable to transfer the horizontal tie force through the concrete floor slab into the concrete core, to avoid the need to design the core to resist a local tension delivered through the cast-in plate and provide any necessary shear reinforcement.

Issues to consider
Split of responsibility
The design of concrete cores usually belongs to the building structural engineer. In most contractual arrangements, the required performance of the connections and the forces they are to resist are also determined by the structural engineer. The design of connections between steel elements are usually the responsibility of the steelwork contractor because they can be detailed to suit the production process. The work of these two parties comes together at the face of the cast-in plate. For the smooth progression of the construction process, it is necessary for each party to know the assumptions, behaviours and limitations of the structural components that come together at this point.

The design responsibilities of the different parties must be clearly defined and understood. It is logical for the split of design responsibilities to lie on the face of the cast-in plate. The design of the plate and the embedded elements fall to the structural engineer, who is in control of all the details of the concrete core wall, including geometry, strength of concrete and reinforcement details. The steelwork contractor selects and details the element welded to the cast-in plate and must also be satisfied that the element chosen (e.g. a fin plate) working together with the cast-in plate will perform as required.

The work of the structural engineer is in advance of the steelwork contractor and therefore it is necessary for the engineer to be aware of the impact of decisions on the steelwork contractor’s subsequent activities. For example, assuming beams are simply supported and specifying shear and axial forces in the same load case means that connections cannot be selected from the standard details in the ‘Green Book’ and must be designed from first principles.

Accuracy of construction and agreed deviations
Concrete cores or shear walls are likely to be specified and built using the National Structural Concrete Specification  and structural steelwork fabricated and erected using the National Structural Steelwork Specification. These documents have different requirements for the accuracy of erected elements which must be reconciled where the different elements come together, notable at the cast-in plates. A set of deviations must be agreed by the appropriate parties early in the project to avoid problems later.

Adjustments to allow for the connections between the steel and concrete elements to be made are often arranged as follows. After the concrete core is constructed, the positions of the cast-in plates are surveyed and a fin plate cut to suit the as-built position and site-welded to the plate. A similar process would be used if a Tee stub were to be preferred. The steelwork must be detailed to allow for a longer or shorter fin plate, depending on the results of the survey. The resistance of the cast-in plate must be such as to carry the loads resulting from a connection anywhere within the agreed positional deviations. Maximum values of ± 35 mm in plan position are typical.

Design Guide
The forthcoming design guide is going through its final checks before publication. It has been funded by BCSA and Steel for Life and a working party with members drawn from various parts of the construction industry has made contributions and made comments on drafts of the guide.

The guide proposes a design model for the design of cast-in plates which is based on design codes. As might be expected, these are Eurocodes 2, 3 and 4, dealing with concrete, steel and composite construction respectively. A consequence of this approach is that the design model uses shear studs to resist shear forces and steel reinforcement to resist tension. The tension is transferred into the concrete via bond with the reinforcement. Eurocode 4 considers shear studs in combined shear and tension but states that tensions greater than one tenth of the stud shear resistance are outside the scope of the code. There is also at present no code-based interaction formula for assessing combined shear and tension on shear studs.

It is intended that the guide will identify many of the issues which are relevant to this form of construction for structural engineers who are embarking on such a project for the first time. The guide will also provide a starting point for discussions between the different parties involved.