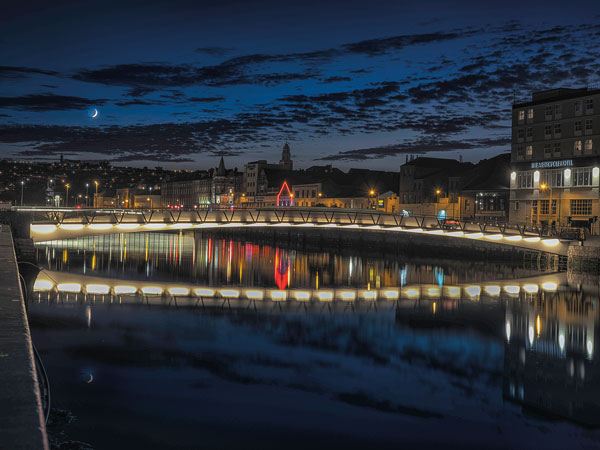 A single-span pedestrian bridge spans the River Lee in Cork, providing unimpeded views while having minimal impact on the existing flooding regime.

The bridge count since opening has peaked at 11,000 pedestrians per day, with expectations that the new link will prompt further regeneration on MacCurtain Street to the north and Merchant’s Quay to the south.

Consequently, Mary Elmes Bridge is a key element of Cork reshaping its vision for the future as a more sustainable, commuter-friendly city, integrating with other projects, such as the Cork City Centre Movement Strategy and Cork Cycle Network.

Designed by WilkinsonEyre Architects and Arup, and constructed by Keating, the structure has a 66m-long span between quays.

The design features a central spine beam that transitions from below to above the deck along the span introducing a small arch effect which, along with fully integral abutments, results in increased stiffness in bending, thus increasing the slender appearance of the bridge. 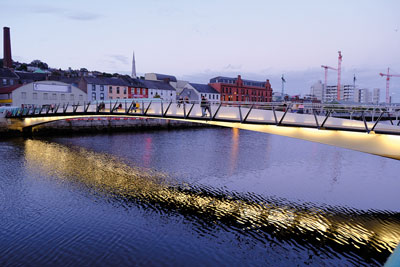 Meanwhile, combining the shallow slender arch with transparent mesh parapets allowed the design team to deliver an understated but visually appealing design with uninterrupted views of the river and cityscape.

The design team’s vision to integrate the walking platform with structure and embedded benches on either side of the central beam has resulted in the bridge becoming part of the urban realm, while the widening at mid-span creates a natural meeting point.

The bridge has a simple structural design, opting for a low lying, arched steel box girder; the soffit of which is shaped with a gentle semi-elliptical form across the water. The uninterrupted single span results in a clear body of water over which the bridge appears to hover. On a calm day, the waters of the river reflect the bridge and complete the elliptical form.

The primary arched box girder of the bridge is fabricated from high-grade steel plate and coated with a protective paint treatment in an off-white colour. This provides a finish which is extremely durable and suitable for the marine environment. Framed stainless steel tension mesh infill panels are fixed back to the parapet posts, providing safe, but relatively transparent, guide rails that allow for unobstructed views up and down the river. The parapet posts are painted dark grey to help contrast their distinctive v-shaped silhouette against the backdrop of the main arched girder.

The bridge was fabricated offsite in nine sections before assemblage at a shipyard downriver from its eventual home. In May 2019, the completed structure was transported up the River Lee on a custom-made barge. It was then lifted into position by cranes located on each quay during an overnight road closure in a tandem lift of 160 tonnes.

Summing up, the judges say the elegant and deceptively simple design of this bridge has turned a new pedestrian and cycle city centre river crossing into something of a destination in its own right.