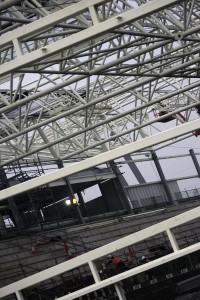 The UK’s first national indoor BMX centre is under construction at Eastlands in Manchester and is planned to be completed by this summer. Steelwork – being erected by SH Structures – is playing an integral role in the project as a series of long span roof trusses have been erected to form the large hall. This new facility will be linked to the existing Manchester Velodrome, and together they will form the National Cycling Centre, the home of the British Cycling Federation.

The 10,219m² BMX Centre will include a 2,000 seat arena plus shopping and cafe facilities. More than 125,000 visits to the Centre are expected each year and thousands of dedicated hours have already been set aside for the local community. Main contractor for the project is Sir Robert McAlpine.