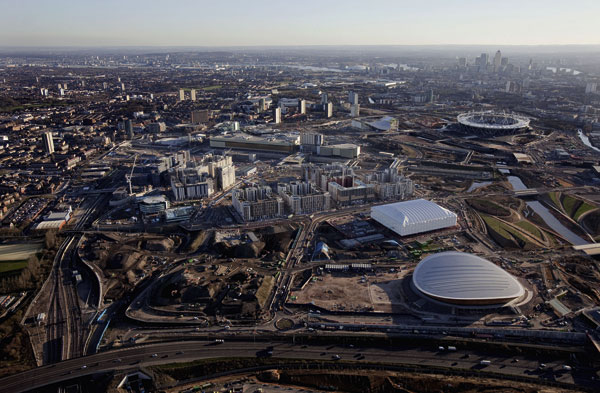 As the countdown begins, these latest images bear witness to the fact that the construction programme at the Olympic Park is within touching distance of the finishing line as all of the major structures are nearing completion.

ODA Chairman John Armitt said: “The ‘big build’ of the main Olympic Park venues is on track to be complete this summer as planned, ready for test events ahead of the Games. These new images show the transformation of a former industrial area into a great new park with world class sports venues and a new network of roads, bridges and infrastructure.”

Recent on site progress on steel construction projects has included the structural completion of the main Olympic Stadium, as the roof and all spectator seats have now been installed. Later this year the turf for the field of play and running track will both be laid.

The permanent structure and wave-shaped roof of the Aquatics Centre is also complete and work is now under way to construct the temporary seating stands which will be demounted after the Games.

Both the Broadcast and Media centres are now complete, while work is now underway to finish the Handball Arena and the Water Polo venue, two more projects relying on structural steelwork.