From Building With Steel, February 1962. 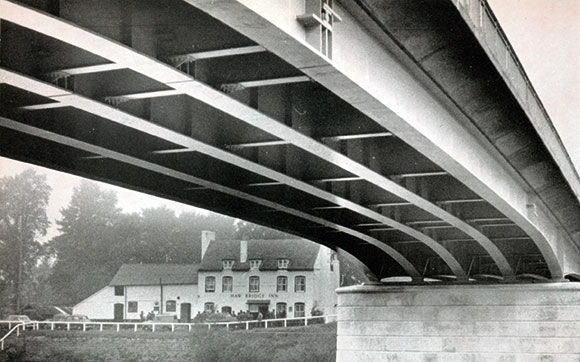 The new steel Haw Bridge over the River Severn in Gloucestershire, was opened last autumn (1961), replacing a three-span cast iron bridge which was built in 1825 and was used until a vessel collided with it in 1958.

The new structure has a central span of 130 ft and two side spans of 88 ft 6 in. The superstructure, designed for full highway loading, is of double cantilevers with a central suspended span. The plate-web sections were shop welded from notch ductile steel and act compositely with the in situ reinforced concrete deck. The cantilevers are 120 ft long and project 30 ft beyond the piers to support the 70-ft suspended span girders. There are five lines of girders along the length of the bridge at 7-ft centres, with transverse beams, to distribute the loading, at 16-ft centres. All components, including the 120-ft cantilevers, were designed to be prefabricated and were given an anti-corrosive metal coating before delivery.

High strength bolts were used for the connection of cross girders and site welding was not used. Web sitiffeners have been confined to the inside faces of main girders to present a clean elevation and enhance the slenderness of the superstructure. Expansion has been provided for with roller-rocker bearings at each end of the bridge and one end of the suspended span. There are rocker bearings at the other end of the suspended span and at both piers. The parapet is of welded steel panels, hot dip galvanized before delivery and capped with a teak handrail.

Britain’s longest suspension bridge – the Tamar Bridge – is now (February 1962) officially open to road traffic. This bridge, linking Devon and Cornwall between Devonport and Saltash, has a single central span of 1,100 ft. It is greatly easing traffic problems in South Devon and Cornwall, especially in the Plymouth area where it is situated at the site of the old Saltash ferry and close to the site of the famous Brunel Bridge. The Saltash ferry is being withdrawn from service.

The suspended structure contains approximately 2,800 tons of steelwork, and about 1,000 tons of steel wire were used in the main cables and suspenders.

The bridge is suspended between two 250-ft.-high reinforced concrete towers. The two main cables each have 31 locked coil wire ropes of 2.37 in diameter whose sockets are connected to anchor rods at the anchorage tunnels. The 31 strands in each of these cables are surrounded by a protection of wire to prevent seepage of water and corrosion. Hangers supporting the stiffening truss are suspended from the main cables. The stiffening truss, in turn, supports the reinforced concrete deck of the bridge.

A patented bridge design has been incorporated in the new 3,240-ft.-long Severn Suspension Bridge between Aust and Beachley, Gloucestershire. Preliminary work has started on the foundations, including two main piers forming the bases of the steel towers and the anchorages for the main cables, but the bridge will take about five or six years to build. Two large gantries have been erected.

The bridge is a suspension bridge was a torsion box girder serving as a stiffening girder and roadway.

When completed the Severn Bridge will be the fifth largest bridge in the world. The road level will be about 130 ft. above high water and 150 ft in the centre. It will carry two highways of two tracks. The bridge will make possible a new route between the South of England and South Wales and will also form links with the Birmingham- Bristol motorway and will ultimately link with the motorway between London and industrial Wales.

A bridge over the River Wye is part of the project and will be 1,340 ft long with twin carriageways.