Is the UK ready for the Eurocodes?

In October 2008, all SCI members in the UK were invited to complete a short survey on the steel sector’s preparations for the Eurocodes. David Brown, SCI Deputy Director, sums up the survey findings

The survey
The survey was undertaken to inform a presentation at the BCSA’s Midland and Southern Branch in December 2008, and provides a good snapshot of opinion and progress.

The response rate to the survey was around
1 in 7, which is considered relatively high. Perhaps many respondees saw the survey as an opportunity to share their (often strong) views on the Eurocodes! The main bulk of the responses (57%) were from consulting engineers. Steelwork Contractors accounted for 32% of the responses with the remainder including academics and local authorities.

Figure 1. When will you (Consultants) design to the Eurocodes?

Awareness
The first question concerned awareness of the Eurocodes, and asked if Clients had enquired about Eurocode designs, or if any design had already been undertaken to the Eurocodes. Overall, around 75% of the responses were a resounding “no”, with no real difference between consultants and contractors. A modest 18% indicated that clients were aware, or that designs to the Eurocodes had been either trialled or undertaken already.

Timetable of change
The second question asked about likely timetables to change to the Eurocodes. It had been anticipated that many responses would have indicated 2010, or 2015. These two dates are significant since 2010 was the original date for withdrawal of National Standards. BS 5950 is due to be reviewed in 2009, and assuming a new lease of life for 5 years, would therefore remain officially appropriate until around 2015.

The response from consulting engineers is shown in Figure 1.

The corresponding response from Steelwork Contractors is shown in Figure 2. 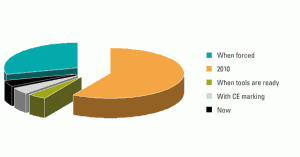 Figure 2. When will you (Steelwork Contractors) design to the Eurocodes?

From both groups, there is a significant proportion who anticipate design to the Eurocodes in 2010. Also in both groups, approximately 25% indicate that they will resist changing design Standards (indicated by a response of “when forced” or “a long time”). In both groups, there were a number of comments about the importance of software are a pre-requisite to change.

The latest news is that Approved Document A of the Building Regulations may change in 2010, with the likely removal of BS 5950 and replacement with BS EN 1993. Although the UK Building Regulations do not demand the use of any particular Standard, listed or not, it is likely that many designers will see the change in the Regulations as a significant driver to change to Eurocode design.

Why might change be considered?
The next question was designed to elicit any perceptions that the change might be a positive move. The response were clear – around 75% (more in the Consulting Engineer cohort) simply said that they would only change from BS 5950 design “if forced to do so”. A modest number indicated that the EU-wide market was an attraction, and some considered that change had economic benefit which might lead to competitive advantage.

If BS 5950 remains, why will you change?
This question presumed that BS 5950 could con- tinue to be used for many years, and asked about change. The responses of the Steelwork Contrac- tors are shown in Figure 3 and the responses from the consulting community in Figure 4.

The difference in response to this question
is significant. The response from Consulting Engineers appears to indicate that despite wishing to keep BS 5950, a significant proportion are already looking at the Eurocodes, presumably anticipating that they will have to change at some point in the relatively near future. This will have an inevitable effect on the Contractors who follow in the supply chain.

Other members of the supply chain
Respondees were asked to indicate if they thought those following them in the supply chain were prepared for design to the Eurocodes. Overwhelmingly, the view was that they were not ready. A modest proportion of Steelwork Contractors thought others were aware, noting bolt suppliers and cold rolled component manufacturers. 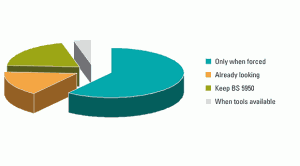 The good, bad and ugly comments
The opportunity to share views was taken by most people who completed the survey, and these were generally helpful, and always illuminating.

Only a few could see any advantage in change. The habit of the UK lagging behind the rest of Europe was mentioned, and it was suggested that the survey contained an implied resistance to change, which was inappropriate. Some with markets wider than the UK saw the Eurocodes as a significant advantage.

Many comments concerned support tools,
and particularly software. It was considered that software was essential, with a strong sense that bugs were inevitable – several thought that waiting for software (and training courses) to “mature” would be sensible.

Technically, there were clearly some who had spent some time looking in detail at the Eurocodes, and a very small proportion who had used them. It was noted that the “change is not as big as that from BS 449 to BS 5950” and “they are not as technically challenging as was thought”. From those few who had used the Eurocodes, the view was that they did not offer economic advantage, were too scientific, were incomplete and there were too many nationally determined parameters.

There were conflicting views on inevitability. The idea of the Eurocodes being inevitable
was described as “utter rubbish”, whilst at the same time others considered that designers had accepted they were inevitable, “apart from a few pockets of resistance”. Some recommended a speedy implementation, and others a drawn out programme. 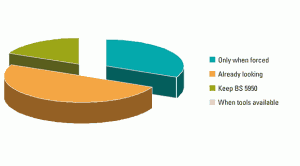 Without doubt, the main message was one of cost. Consistently, responses bemoaned the cost of the documents, the guides and the training, and pointed out that for Consultants, the problem was magnified since they were multi-material. Most observed that professional fees were wholly inadequate to cover the cost of the change.

There was limited harsh criticism – reserved mainly for the fundamental idea of Eurocodes and the EU in general. There was some collateral criticism of the SCI, perceived by a few to be blindly supporting the Eurocodes, and encouraging opposition.

Conclusions and observations
Given a choice, it would appear that most respondees would prefer to have nothing to do with the Eurocodes, and retain National Standards unless “forced” to change. There are clearly very significant and real concerns about the cost of the change, especially for smaller practices and when considering the challenge repeated across several materials. Unfortunately, the plan to remove barriers to trade was instigated by political will some 30 years ago, and it seems highly likely that the Eurocodes will be implemented at some stage. For many, that date may be uncomfortably close, if the Building Regulations are changed in 2010. The full suite of Eurocodes with National Annexes will be complete early in 2009, so design could be undertaken immediately.

Despite the majority who would prefer not to change, the SCI view is that implementation
is inevitable. There are several possible drivers, including the probable changes to the Building Regulations mentioned previously. These include publicly-funded work, where Eurocode design
is more likely, pressure from Clients or Insurers and the unwelcome scenario of having a design practice design to different suites of Standards for different materials. There may be some who find that the reduction in ultimate loads reported in previous Eurocode articles is an attraction.

Although there has been a strong (and continuing) campaign to retain BS 5950, the sector has at the same time been preparing to facilitate the introduction of the Eurocodes, assuming demand from designers. A range of training is available and guides will be printed early in 2009 with software also available during the year.