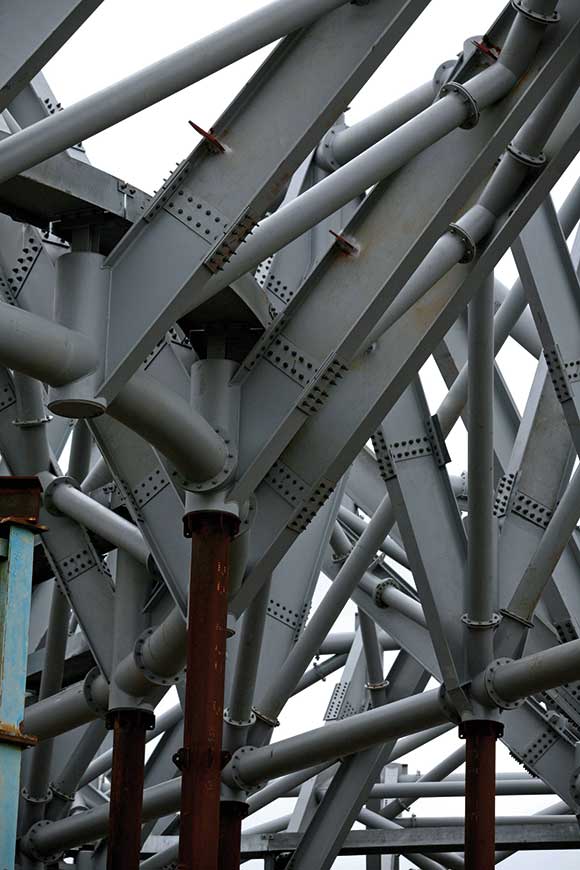 As the erection process proceeds temporary props are positioned below the roof nodes.

Steel is showing its great flexibility and quality on a challenging design for a new transport museum in Glasgow. Martin Cooper reports on the unique geometry of its iconic twisting and curving steel frame.

Scotland has a rich tradition in the transport and related engineering industries, and no area more
so than Glasgow. For hundreds of years the Clyde was home to a thriving and famous shipbuilding industry, so much so that the term ‘Clyde built’ was recognised as a sign of quality and engineering excellence throughout the world. Locomotives made at the city’s famous Springburn works went to power the transport networks of an empire.

Each of the five roof peaks has a different height.

Today, the former docks and quays along the Clyde are being transformed as a multi-million pound regeneration programme is breathing new life into the area. One of the most prestigious and eye-catching projects is the Riverside Museum, a new iconic museum to showcase the city’s contribution to transport.

Due to open in 2011, the new museum will replace the current Museum of Transport, located nearby at Kelvin Hall, and will display more than 3,000 transportation related objects, including the locally-built Tall Ship Glenlee, which will be moored alongside the building.

The museum is being built on a 1.2ha site at the confluence of the Clyde and Kelvin rivers, one of the few intact areas of historic quayside, and a fitting reminder of the city’s shipbuilding past.

Work on site started in 2007 and the design of the building was the brainchild of much-acclaimed architect Zaha Hadid. The building is a twisting and curving steel framed structure on plan with two folds or transition zones (the points at which the building’s straight planes turn), while the roof is
an innovative pleated concept with five peaks and valleys.

With two main facades, one facing the city and the other leading directly to the riverfront, the design creates a tunnel-like building which will create a historic transportation journey for visitors. 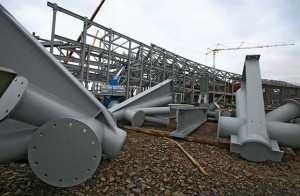 The roof nodes or cans are mostly unique and are able to accept up to ten steel members.

Advance works carried out by BAM Construction included ground clearing and digging out the old foundations of the site’s former warehouses. Once this was complete an extensive piling programme took place with precast and in-situ piles installed.

A sequential programme means the steel erectors are predominantly working off of a clean and smooth concrete slab, while the cladding contractor has been able to begin its work by following on behind the steelwork.

The superstructure’s heavily reinforced slab has been designed as a continuous suspended flat slab, which will be taking some extremely heavy loadings from the museum’s exhibits, such as locomotives. Within the slab and below the ground floor a series of service trenches, 3m x 3m, allow routing of duct work and electrical services to be hidden under the exhibition space.

Large open column free spaces, up to 50m wide in places, have been achieved by forming the innovative roof with a series of inclined trusses, following the external geometry of the roof, which utilises folded plate action. The inclined planes are supported at the north and south facades on a series of structural mullions and within the building at the two transition zones.

“The project’s geometry is unique,” explains Tim Kelly, Senior Engineer for Buro Happold. “The structure exploits the convex and concave geometry to form a locked structure which spans across the width of the exhibition space to the column lines which flank the building.” 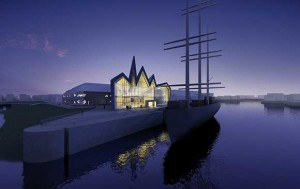 Impressions showing the twisting on plan design and the roof’s valleys and peaks.

Along the two outer perimeter elevations the museum features two-storey exhibition areas. Here, cross bracing has been hidden that aids overall stability, which is also derived from portal action at various points in the steel frame.

Phase one of steel erection consisted of a two- storey zone approximately halfway along the eastern elevation. This zone was chosen as the starting point as it would stand up without any propping. From here on, other phases are now being erected which are connected to the initial zone, and three of these subsequent areas are all supported with temporary props and trestles.

pin. “We’ve designed the props so they can be re- used throughout the project,” explains Andrew Hart, Watson Steel Structures’ Contract Manager.

“As the erection front of each zone moves forward, it is progressively de-propped from the rear with the majority of the temporary members being used again in later zones.”

During February the project’s first de-propping exercise will take place with a total of 27 temporary props and trestles due to be lowered in one day.

The steel pleated roof, featuring five differing peaks, of which the highest is 18m above ground level, is the most complex part of the project. Watson Steel has designed a unique node connection (dubbed a can) which can accommodate the numerous incoming rafters, bracing and ridge valley members which form the roof.

As the roof pitches at various angles and also slopes from south to north, most nodes or cans are unique and can accept up to ten steel members. The biggest node is approximately 1m in diameter.

“We have 25 lever arch files full of connection calculations at our office,” explains Mr Hart. “The majority of roof connections are unique to a single joint and are fabricated using individual jigs that are modelled in XSteel. The curved ridge and valley members, meanwhile, have been fabricated using multi-jigs.” 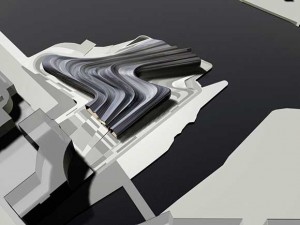 Impressions showing the twisting on plan design and the roof’s valleys and peaks.

Not only working out the complex roof connections, but also the de-propping programme, has called for close cooperation between Watson Steel and Buro Happold, with models continually passing back and forth.

One of the museum’s most important exhibits will be a locally-built steam locomotive known as Loco No. 9. To give the loco a prominent position it will be displayed above first floor level supported on a large steel truss. The truss is curved in plan (because of the building’s shape) and spans 30m between two perimeter columns. The truss supports both the roof and the first floor exhibition area. The top cord is formed from a valley beam of the roof, and the lower cord by the edge beam at first floor.

Towards the riverside entrance of the building another large truss, known as the paternoster truss, has been erected. This 26m span element was brought to site in three pieces and assembled on the ground before being tandem lifted into position as one 26t section. This will support a revolving wheel which will house numerous models of ships which were built on the River Clyde.

Turning such an ambitious design into reality has required some in depth and lengthy cooperation between all those involved. When it opens in 2011 the Riverside Museum should reinforce Glasgow’s reputation as an engineering and tourism hotspot.

And as Mr Ward sums up: “It will be an attraction that team members will be proud to bring their children to.”