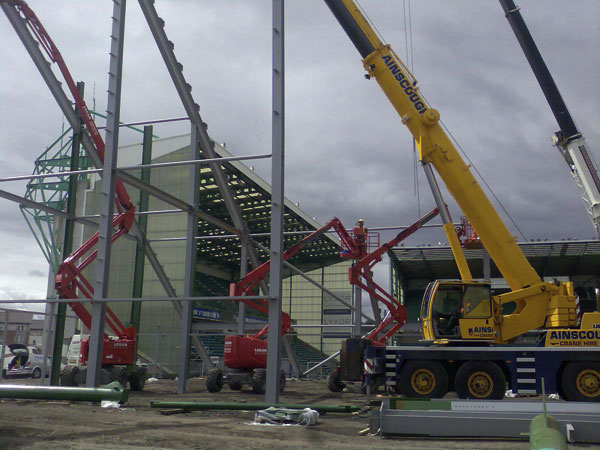 Scottish Premier League side Hibernian will have a new East Stand for the forthcoming 2010/11 football season.

With room to accommodate 6,400 spectators, the new stand will increase the overall capacity at the Easter Road Stadium to 20,250.

Working on behalf of main contractor Hall Construction, The AA Group (TAAG) completed the steelwork programme during June. Erecting 400t of structural steelwork for the project, the company also installed the precast units for the terracing, steps and vomitory walls.

The new stand is topped with a 30m cantilever roof, formed with Westok cellular beams which were brought to site in two sections.

“All steelwork erection of the cantilever was done from the back of the structure as we were not permitted to stand any equipment on the pitch,” said Kevin Nickson, TAAG Contracts Manager. “This meant we had to use a large mobile telescopic crane to lift the roof beams up and over the grandstand structure.”

Work on the project is on-going and the East Stand is scheduled to be completed and fully open to spectators later this year.