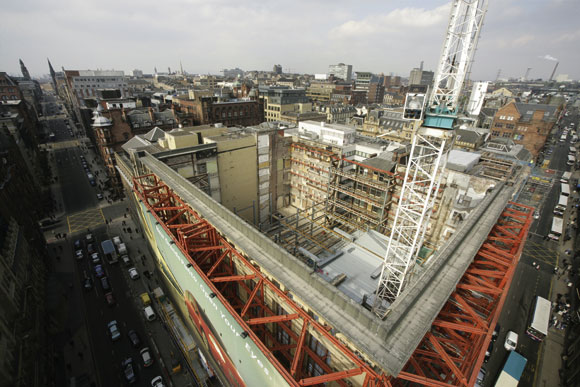 One of Glasgow’s most iconic buildings is getting a new steel framed interior behind a retained 1920s listed facade. Martin Cooper visits the former banking headquarters which is set to become a stylish city centre office block.

The old headquarters of the Bank of Scotland at 110 St Vincent Street in Glasgow is undergoing a complete refurbishment.

The building situated in the heart of Glasgow’s central business district and designed in 1925 by architect James Miller, has been described as one of the city’s most striking structures. It has a Grade A listing which requires the facade and ground floor Banking Hall to be 100% retained during any structural alteration.

Renovating an old structure can invariably throw up a number of challenges, not least marrying old materials to new. Raymond Slaine, Director at Goodson Associates says this project was no exception.

“Fortunately we located the original drawings and this was a great help when designing the new steel frame into the building,” Mr Slaine explains. “We surveyed the existing steel in the facade and discovered it was in good condition for it’s age, but we also found the alignment is slightly off,” he adds.

The biggest challenge was then actually fitting the new frame within the retained facades. The building is the best fit for the site but it is slightly off centre. With the aid of the original plans and modern 3D modelling, Goodson and steelwork contractor Rippin Steel had to design tolerances  of +/-15mm into connections for the new columns and beams which married into existing retained steelwork. “By building in tolerances we were able to plot a perfect grid plan on the new levels,” Mr Slaine says. 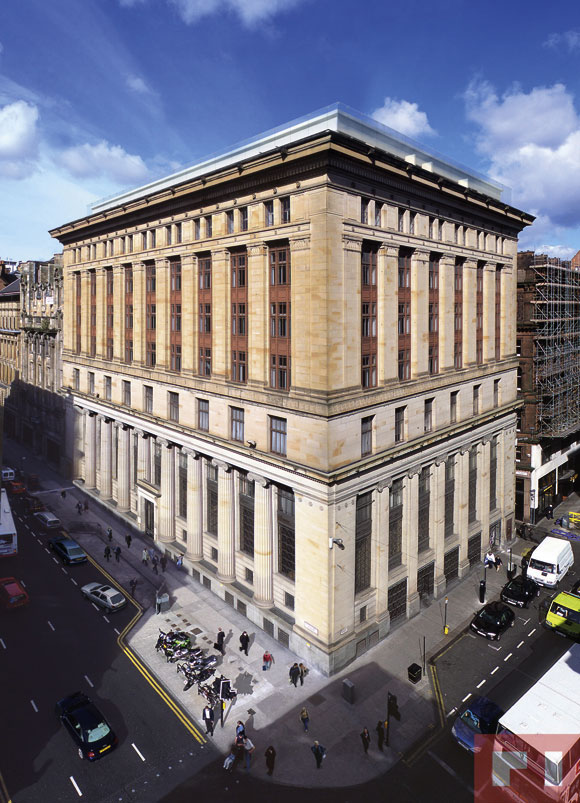 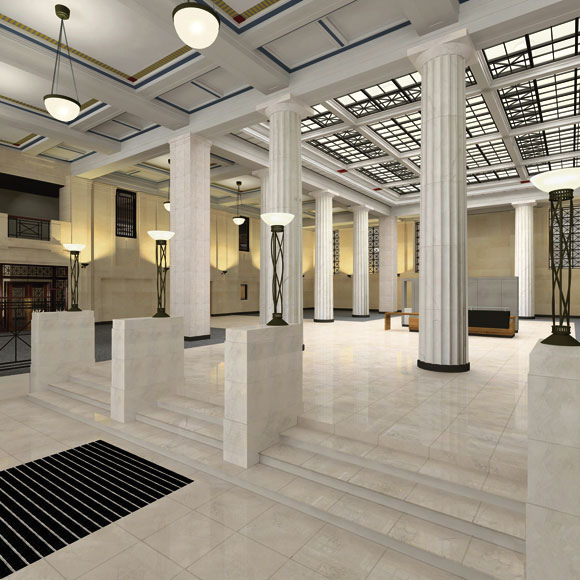 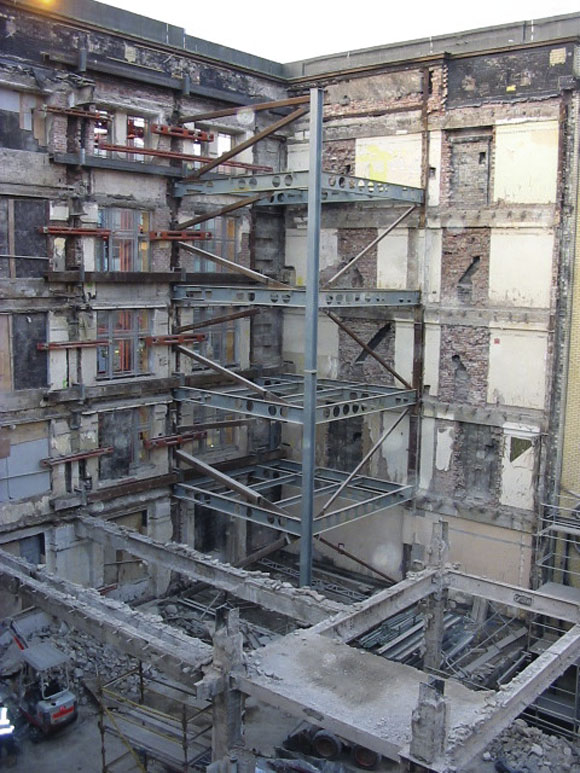 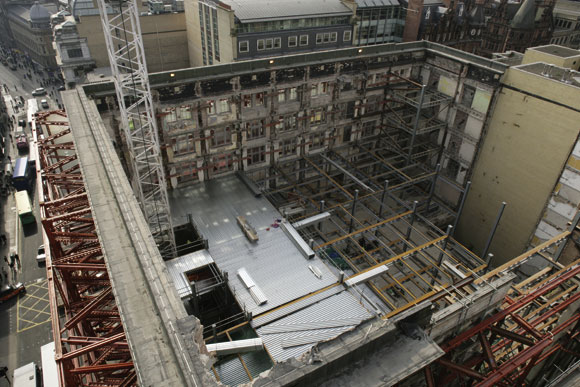 The new floors will include a terraced seventh level

The majority of the construction work consists of installing new interior floors giving increased floor to ceiling heights above the two level banking hall. The old interior was completely demolished leaving an empty shell to be in-filled with a new steel frame. Previously the building was a U-shaped block arranged around a 12m x 20m lightwell. This has been filled in to form a new larger open plan office space of 12,000ft² on seven levels, which includes a new fully glazed terrace floor at the roof level.

“Steel was always going to be the material of choice,” Mr Slaine explains, “as there is more flexibility in the design, and it was essential for forming the connections between the original and new steel.”

All structural steelwork has been carried out by Rippin Steel, whose Managing Director David Jamieson says about 700t of steel has been used for the new structure above the Banking Hall, while a further 100t was utilised on the refurbishment of the lower levels including the project’s two basement levels.

“A key part of the work involved filling in the lightwell above the two retained floors of the listed Banking Hall,” Mr Jamieson says.

“The upper levels had already been demolished, so the listed Banking Hall could have been exposed to the elements if we’d not planned how best to install the two levels of steel in-fill sections within the former lightwell,” Mr Jamieson adds.

In order to protect the ground floor, Rippin installed the beams for both floors at second floor level. Once the upper level had been installed, including the composite concrete slab, it acted as weather protection for the floor below. The first floor beams, which had been slung temporarily under the second floor were then chain blocked into place.

This tricky procedure involved Rippin installing approximately 40t of steel which included four 13m-long 5t main beams for each of the two floors and a host of secondary 203mm x 133mm members.

The 23 original internal columns were retained throughout the Banking Hall and cut 1m above the second level.

Bolting the new columns to the old members was another very challenging aspect as Mr Jamieson explains: “We had to grind the old columns flat and then add a plate for the new columns, ensuring each member was completely level,” he says.

“We had to tweak this part of the grid by one degree to get a perfect plan,” Mr Slaine explains.

Rippin’s steel erection programme for the interior worked by splitting the structure into thirds and working east to west. Two storeys were erected with the decking in each third, and when complete Rippin moved onto another third allowing Balfour Beatty to follow behind and pour the concrete slab.

The building’s two basement levels are also being refurbished with level -1 being turned into a secure car park for 25 vehicles which will be served by a car hoist (lift), while level -2 will be a storage area.

To give the car park more open space Rippin had to take out two internal columns and replace them with two 9m-long double transfer beams, each weighing 4t. Getting large sections of steel into the basement area wasn’t easy. “The columns had to be lifted down one of the cores and then carefully manoeuvred across the basement floor on a trolley as no large equipment could gain access,” Mr Jamieson explains.

“Then to position and erect the beams we positioned A-frames on the floor above and hoisted the beams into position with chains hung through pre-drilled holes in the concrete floor,” Mr Jamieson says.

The building is scheduled for completion in the Spring of 2007, almost exactly 80 years after it first opened its doors for business. In the words of the project’s architects Holmes Partnership, Glasgow will have acquired a high-specification office block incorporating large floorplates and a magnificent fully restored ‘banking hall’ entrance.