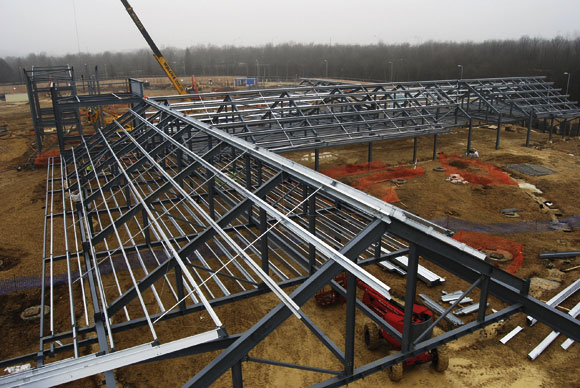 All plant will be housed within the building’s roofs.

Changing the structural design to steel, from timber and masonry, has resulted in a quicker construction time and more efficient buildings for a new healthcare facility in Peterborough.

One of the latest PFI healthcare initiatives is a new Mental Health Unit (MHU) currently under construction at the Edith Cavell Hospital on the outskirts of Peterborough.

The project consists of six separate steel framed structures which are all linked by a series of covered walkways. Four of the buildings are single-storey, while two centrally located administration blocks have two floors.

The centre, which is due to open later this year, will offer 102 beds in state-of-the-art purpose built accommodation within single en-suite bedrooms. It will also include adult acute psychiatric wards, a psychiatric care unit, older people’s mental health unit and a specialist service for people with learning disabilities.

DGT Steel & Cladding was awarded a £1.3M steel and cladding contract during 2007 to design, fabricate, deliver and then erect nearly 600t of structural steelwork for the project. In addition, it was also contracted to design, supply and install the roofing and cladding packages. 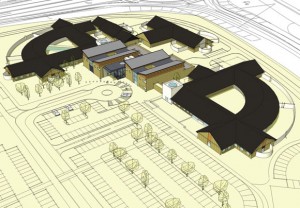 All six structures are linked by curved walkways.

Matthew Byatt, who heads up DGT’s in-house structural engineering design consultancy, says this overall involvement has proved invaluable in ensuring that the steel superstructure design and its inter-relationship with the building envelope, provided the most economic solution to meet the requirements for the building.

“By not just being the steelwork fabricator we’ve been able to deliver a more cost effective solution,” adds Mr Byatt. “During the design stage we also suggested and then implemented some alterations which have saved the client time and money.”

Originally the project was to be built with load bearing masonry supporting timber trussed rafters, however this plan was shelved by the client in favour of the faster and more cost effective steel option.

“The building’s design however didn’t change,” explains Mr Byatt. “So we then had to design the steel frame around the original layout, and fit col- umns so as not to obstruct windows. Consequently we’ve ended up with a very irregular grid pattern.”

Because each structure has a lot of large win- dows, there was very little room, once external col- umns were taken into consideration, for any bracing. So all bracing is limited to the buildings’ gable ends.

“What we’ve designed is an efficient and durable collection of structures, based around an original timber and masonry idea,” says Mr Byatt. “This highlights steel’s inherent flexibility.”

The two largest one-storey buildings needed internal column-free areas and there are spans up to 15m long within the structures. To support the roof DGT installed a truss arrangement to pick up beams as there are no columns.

“There are a couple of internal columns,” adds Mr Byatt. “But these are only in corners where the curved sections of the roof intersect the straight roofs and the structure required the extra support.”

The client wanted a collection of predominantly low-rise buildings and DGT says it met this requirement by designing the roof areas to support plant rooms in what is essentially a window-less floor level.

Summing up, Mr Byatt says the buildings will be efficient and durable, and as the walls are non loading bearing they can be moved in the future if the structure’s layout is modified.