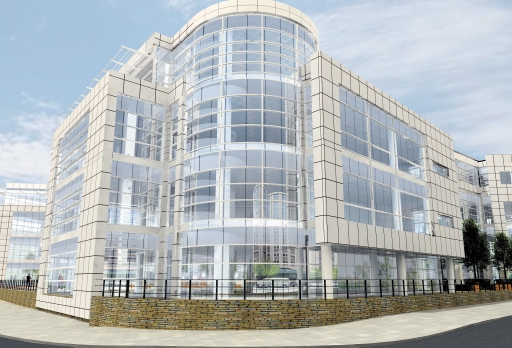 An office and residential development has presented a number of difficulties due to its location on the island of Guernsey. Steel has been used to good effect to overcome many of the design challenges.

The Flagship Development (fig. 1) is currently being built in Admiral Park on the east coast of Guernsey, north of St Peter Port. The design-andbuild contractor is RG Falla, the client is ComProp, and structural design is by WSP Cantor Seinuk. The project involves the construction of a large basement car park with two office blocks above the northern end. A future phase will add three residential blocks above the southern end of the basement. After a complex exercise to clean up contaminated land, building work began in June 2003; completion is due in May 2005.

UNIQUE CHALLENGES
Guernsey is a small but prosperous island with close links to the United Kingdom, although it is geographically closer to France. It is not in the European Union, and its singular banking laws attract many financial institutions. Because of these special circumstances, construction projects on Guernsey face a different set of challenges to outwardly similar projects in mainland Britain.

The most obvious difference is that nearly all materials must be brought to the island by ship. Only concrete and concrete blocks are produced locally, and lightweight concrete is not available. Local construction labour is rare, and skilled labour scarcer still; most site staff and labour is imported from the UK or France. Prosperity also leads to a high demand for parking spaces – there are said to be more cars than driving licences on Guernsey – and so projects usually feature much bigger car parks than is the case on the mainland.

FOUNDATIONS
Until about 300 years ago the Admiral Park site was under the sea, in a small bay. Then a causeway was built across the bay and gradually the land was reclaimed, becoming first marshland and then solid ground. This process left strata comprising intact gabbro (the local form of granite) at about 6m below ground, overlain by weathered gabbro, alluvium and a small amount of made ground.

The alluvium does not have sufficient strength to support buildings of the size being constructed at Admiral Park, and so in the southern part of the site – where the car park basement is only one storey deep – the column bases and basement slab are piled. In the northern part the basement has two storeys and so a concrete raft foundation is used, bearing directly on the weathered gabbro. 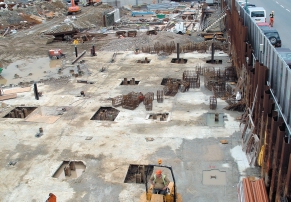 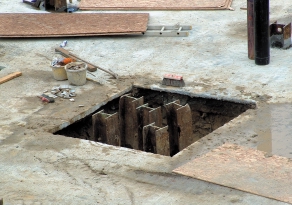 Driven steel piles with a standard size of 254 x 254 x 85 UBP were used throughout (figs. 2, 3). The advice in the Steel Piling Handbook to allow for a corrosion rate of 0.015mm / face / year was followed; over the design life of 100 years this gave a loss of section of about 3mm, or 20%. The advice in the handbook appears to be conservative, and it would appear that additional research or improved guidance could make steel piling a more attractive option generally.

On Guernsey the advantage of steel piles is that they are lighter, more compact and hence cheaper to ship to the island than concrete piles of similar capacity. (A 300mm diameter concrete pile weighs about 170 kg/m²) Bored piling is less reliable than driven piling because boulders in the weathered gabbro frequently interfere with augurs, and rigs are not readily available.

BASEMENT AND PODIUM DECK
The basement is about 200m long and 60m wide. The northern third has two storeys; the remainder has one. It is a concrete box structure, designed for small crack widths to prevent ingress of water and – in the two storey section – provided with tiedown ground anchors to eliminate the risk of flotation. Steel sheet piles with temporary ground anchors and tubular props provide temporary works for the excavation.

The intermediate floor in the two-storey basement is built using composite beams and Holorib metal decking. Although the car park is open to the external environment, steel is preferred for economy, speed of construction and because it avoids the need for skilled carpenters to construct formwork. Concrete is more expensive on Guernsey than on the mainland because there are limited supplies of aggregate; the composite structure reduces the volume of concrete required.

Because the galvanising on the metal deck is not expected to last through the design life of the building, it has been ignored in the analysis of the structure. Reinforcement is used to resist transverse forces and to provide strength for the slab to span between beams.

The “podium deck” at ground level supports the buildings and the external landscaping. Under the offices the columns in the car park align with the buildings above and the design is similar to the intermediate car park floor. Loads are higher outside the building footprints, where the design allows for the weight of window cleaning vehicles and over a metre of soil. 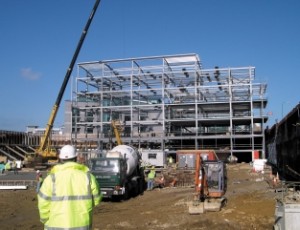 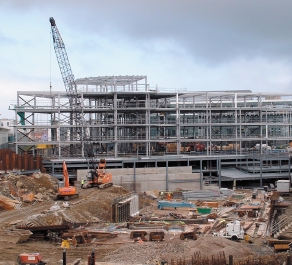 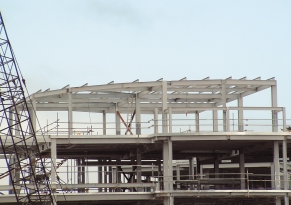 Beneath the area reserved for the reinforced concrete residential buildings, the design is more complex. In order to achieve the optimum car park arrangement a rectangular grid of columns is provided in the basement. However the buildings are L-shaped and, in order to provide sea views for all the apartments, they are at an angle of about 30° to the grid below.

The podium deck is therefore designed with a grid of upstand concrete beams. These provide a depth of concrete for anchorage of the starter bars; they also transfer column loads to the nearest adjacent steel beam. The primary and secondary beams are nearly all designed as transfer beams, and as a result many are very large – up to 914UB, despite their modest 7.5m spans.

OFFICE SUPERSTRUCTURE
The office buildings are designed in steel, with composite beams and concrete slabs on Holorib metal decking (figs. 4, 5, 6). The two blocks each have four office floors and a roof-level plant slab. Lift and stair cores are in steel; the stairs themselves are precast concrete in order to provide rapid, safe access to upper floors during construction.

Because of the number of openings in the cores, and due to their spatial arrangement, it was not possible to provide stability by means of bracing. Instead a sway frame method was adopted, based on the SCI design guide P264, Wind-moment design of un-braced composite frames. The guide allows semi-rigid design: that is, in the strong axis of the columns, the connections are considered to be pinned for dead and live loads, and rigid for wind loads. It assumes that there is diagonal bracing in the weak axis of the columns. The latter is not possible here and so the connections in this direction are designed for full moment connectivity under all loading conditions.

Services distribution is through raised floors and holes (stiffened where necessary) through the webs of the steel beams. Edge beams are designed to a low deflection requirement in order to limit movement in the external glass and granite cladding.