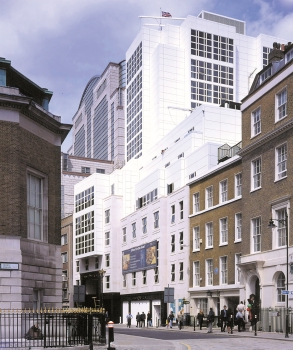 The design team grouped the new swimming pool and conference facility in a single new structure, occupying the space of the original side wing.

This project demonstrates how steel can be used to overcome technical problems and to unlock the potential of existing buildings previously thought to be beyond their useful lives.

The redevelopment of 8-10 Coopers Row, London, as The Grange City Hotel represents a major achievement in the use of structural steelwork in the sustainable use of existing building stock. Originally a 1956 office development built by Richard Seifert, the building included a thirteen-storey reinforced concrete main block and five-storey side wing, with a basement extending underneath the entire site. By 2000, the building no longer met the needs of modern commercial clients. However, Grange Hotels saw an opportunity to redevelop the building as a new five-star hotel in a prime city location. An added factor of fascination, as well as design complexity, is that the site uniquely incorporates part of the original Roman wall to the City of London, a Scheduled Ancient Monument that required full protection throughout the works.

THE EXISTING STRUCTURE
There were a number of technical problems to solve to allow the building to be redeveloped to meet Grange Hotel’s requirements. A comprehensive programme of material testing highlighted low and variable strength in the insitu concrete frame, which meant that the load capacity of the frame had to be re-appraised. Having established that the floor slabs had sufficient capacity under the reduced loads from the proposed change of use, it was proposed to insert new steel elements along the perimeter to overcome inadequacies in the existing load bearing mullions. Replacing the perimeter structure brought the added benefits of opening up the elevations to the fine views across the city and towards Tower Bridge. Bay window extensions could also be added, meeting the planners’ wish to see the mass of the major block broken up, and providing valuable additional floor area for the client. 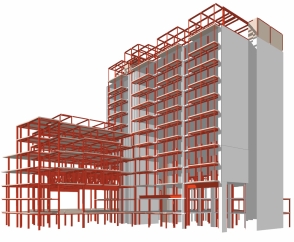 SITE WORK
The sequence of works on site, critical to the success of the project, was carefully planned to avoid the need for additional temporary works. Carefully sequenced removal of mullions brought about a controlled change in the load path of the perimeter structure. By placing the new steel frames inboard of the existing mullions, they could be installed on a floor-by-floor basis before demolition of the mullions began. Disproportionate collapse and local bearing stresses between floors were assessed in detail, and overcome by the use of continuous ties and spigot blocks in the connections.

The internal concrete columns were retained but required strengthening. This was achieved by inserting new steelwork either side of the existing columns. To minimise the amount of strengthening required, a time history analysis of the build up of loads was undertaken to determine the load share distribution between the existing loaded concrete columns and the new members. The optimum solution was to jack the new steel columns using proprietary flat jacks. This relieved the existing columns below the eighth floor of some of their loads. In doing so, both live loads and superimposed dead loads from the partitions, screeds and finishes, could be shared between the elements to fully utilise the safe capacity of the existing structure.

These solutions saved the client significant time and money compared to a new build option, by allowing structural works to start of site within months of taking vacant possession of the building, and re-using the existing floor plates, markedly reducing the area of new structure required.

NEW CONSTRUCTION
To fully develop the potential of the site the client wished to build a new swimming pool and conference facility to compliment the bedroom and restaurant facilities which are located within the original 1950’s building. The design team worked on the concept of grouping these large volume areas in a single new structure occupying the space of the original side wing. Additional bedrooms were located above the conference hall, and the building line was extended to meet the existing pavement line to maximise the new space. The natural material choice to meet the requirements of a long-span structure was structural steelwork. The design that was developed spans a clear area of 16m x 23m. Storey-height trusses located within internal walls were detailed to allow them to be successfully craned into place over a weekend road closure. The framing for the remaining bedrooms was then constructed in a conventional manner. Careful detailing and attention to the sequence of installation were critical to the successful completion of the works on site. The hotel was opened in 2002.

PHOTO EXTRA
The natural choice for the long span structure was steelwork. This spans a clear area of 16x23m. Storey-height trusses were craned into place during a weekend road closure. 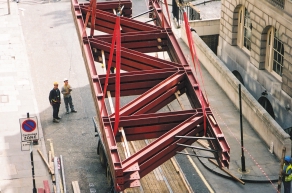 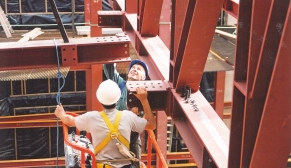 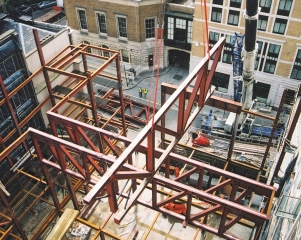 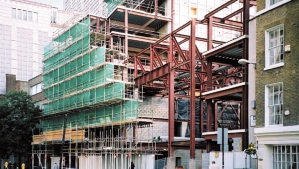