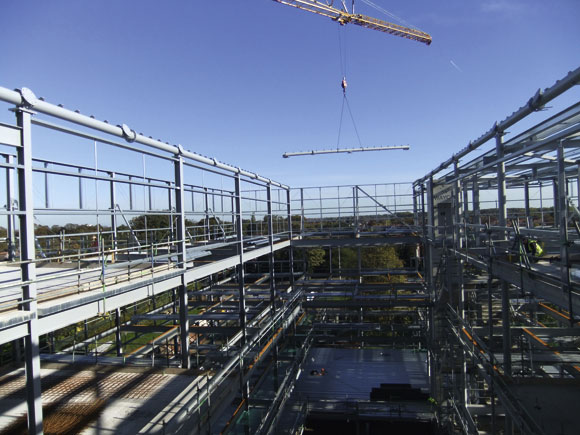 Built around a centrally positioned feature atrium, Grimsby’s University Centre is set to usher in a new era for higher education in North Lincolnshire.

Work is under way to transform the Grimsby Institute of Further and Higher Education campus at Nuns Corner into a regional state of the art facility.

The construction of a new five-storey University Centre will provide the campus with an impressive landmark structure, not just for the town but also for the wider North East Lincolnshire region.

Designed to achieve a BREEAM ‘Very Good’ rating the Institute’s new University Centre is an iconic structure designed to seamlessly and sympathetically blend with the existing campus buildings.

Constructed on the footprint of a former sports hall, the building will include lecture theatres, research facilities, clinical skills rooms, laboratories for science and sports physiology, computer suites, studios for television and radio broadcast and a fully licensed bar with food outlets all based around a central atrium.

The atrium forms a central element of the project, in more than one way, as all of the internal accommodation wraps around this five-storey high structural opening. To allow plenty of natural daylight to penetrate into the building, the atrium will be covered by a curved 580m² ETFE roof light.

The structure consists of a steel frame supporting a 150mm thick composite deck for the flooring. Externally, the design intent, according to Ryder architects is for a white reflective, monolithic block with deeply grooved and brightly coloured window reveals. The white ceramic granite cladding of the building’s façade will reflect the colours and shapes of the adjacent mature trees and plants. 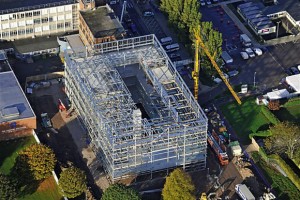 Steelwork erection and design has been undertaken by Barrett Steel Buildings, working as a design and build subcontractor to main contractor Miller Construction. The overall project structural engineer is AECOM, and it initially designed the steel frame. Barrett Steel Buildings then took on AECOM’s steel design, keeping the majority of the frame as it was, but doing some value engineering.

“The basic grid for the structure, which is 6m × 8m, was retained but we rationalised the beams, specifying less but bigger members, which gave a more economical design,” explains Chris Heptonstall, Associate Director (Design) for Barrett Steel Buildings.

Erecting the project’s 300t of structural steel was completed during an eight week programme, which also included the installation of three sets of precast stairs and one lift shaft.  The stairwell’s are braced, and this provides the structure with its stability.

Because of the nature of the building, with its many IT suites and media laboratories, the first, second and third floors are heavily serviced. This required a larger structural void than would ordinarily be used on a structure of this size.

All of the steel was erected using one 50t capacity mobile crane and two cherrypickers. Commenting on the erection programme, Richard Chapman, Barrett Steel Buildings Site Manager, says: “Erecting the main frame steelwork was fairly straightforward. The grid pretty much stays constant right through the building, no matter what the final usage of the rooms.”

The majority of main columns were brought to site in complete 16m lengths – the full height of the building. Internally, around the perimeter of the atrium, the columns are feature CHS members, which are spliced at fourth floor level.

Another 4m-long tubular section was added to these main columns to form the raised support for the atrium’s ETFE roof. Sitting higher than the rest of the roof area, the ETFE is fixed to a steel tubular grill that straddles the CHS columns either side of the atrium’s top.

This curved feature tubular steelwork arrived on site as eight individual units which were then lifted into position by crane and installed at 8m centres over the atrium. Each tubular unit is made from 300mm diameter tube and is 12m long. Steel brackets are fixed to the tubular unit which accept the ETFE roofing system.

Most of the building accommodates functioning teaching rooms, meeting areas or lecture theatres. The exception is the uppermost fourth level which is split evenly between administrative offices and a large plant area.

Surrounding the edge of the roof there is a high steel parapet, strengthened with steel rods, which acts as a safety barrier for maintenance workers on the roof.

The Grimsby University Centre is due for completion in July 2011. 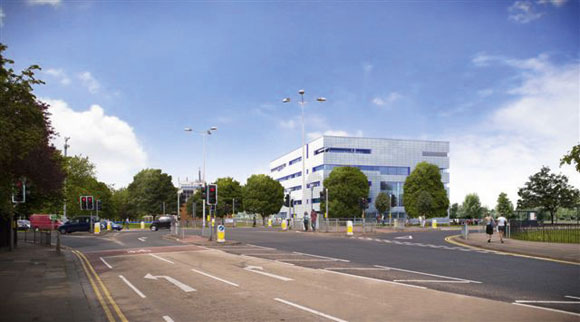 How to achieve a Very Good rating

BREEAM is the leading and most widely used environmental assessment method for buildings. It sets the standard for best practice in sustainable design and has become the measure used to describe a building’s environmental performance. 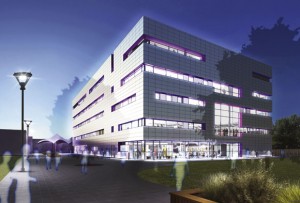 “We are targeting a ‘Very Good’ rating with 95% of the heating and all of the cooling of the building being provided by air source heat pumps,” says Jaime Harper, Miller Construction Project Manager.

In this regard the steelwork has been provided by Barrett Steel Buildings, based in Bradford which is just a short motorway journey from Grimsby.

The building is being constructed from materials that have received an A-Grade in ‘The Green Guide’ and which will reflect the natural local habitat.