In the second part of a software round-up, New Steel Construction looks at some of the latest releases for designing cellular beams and for 3D modelling. 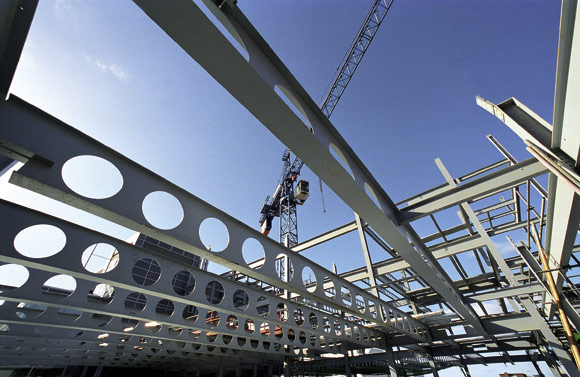 Beam Wizard, launched a year ago in version 3.1 of Fabsec’s free FBEAM software, “takes the donkey work out of designing a cellular beam,” says Head of Software Development Guy Rutter.

“Most packages will do design and analysis and confirm whether the section has spare capacity or is under capacity in shear, bending and so on. Then you tweak the sizes and analyse again.” Someone very familiar with the process may do this in a few minutes but for an engineer in a general structural engineering practice who might only design a cellular beam intermittently the process is much slower.

“With the optimisation function you simply enter the load and span, and the program goes through the process and gives you the most economical solution in a matter of seconds,” says Mr Rutter. Conversely, an under-designed beam can be optimised with mass added automatically until the beam passes. In addition, FBEAM has a simple but sophisticated cell generate /edit toolbar for circular, rectangular or elongated openings. The software has been independently accredited by FEDRA of Buro Happold.

The software has an automated updating system.

FBeam 3.1 will in addition optimise for fire protection. “If the beam is fire protected, the coating may be of a similar order of cost to the steel itself,” says Mr Rutter. “The software will optimise the section mass and coating thickness to provide the most economical solution first time. Prices are updated automatically based on information supplied by Corus and Leigh’s Paints.

Fabsec is aiming to integrate its software with CAD modelling packages in its next release, so that an engineer designing a frame in a 3D CAD package will be able to choose an element from a layout and design it as a cellular beam without coming out of the CAD package. 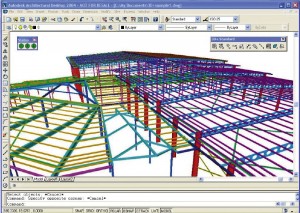 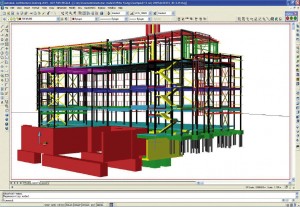 Some engineers struggle at first to see the benefit of 3D CAD models. Creating a 3D model first in order to generate 2D drawings is a new way of working for many. And it may not be worth the effort of creating a model for a small project involving just a few beams. But, says CSC, for most projects involving a steel frame (and any other material) there can be signficant time savings. Marketing Manager John Carey says that CSC clients have reported savings of 40% or more in drafting time.

CSC’s 3D+ CAD system for structural engineers runs under AutoCAD and is used by many companies as their standard method of generating general arrangmement drawings. According to CSC, it is proven to help engineers produce general arrangment drawings more easily, faster and more accurately. It also helps track and manage changes, automatically revising the drawings when required.

Waterman Group CAD Manager Lee Barnard says: “Our CAD technicians prefer to use 3D+ to create structural models, as it is then quicker and easier to generate the required 2D and 3D views.”

CSC is challenging structural engineers to let it prove 3D+ could help them produce their drawings more quickly. “We invite them to give us some sample drawings from a past project for us to reproduce in 3D+. Often we can recreate drawings that would normally take weeks within a few days.” 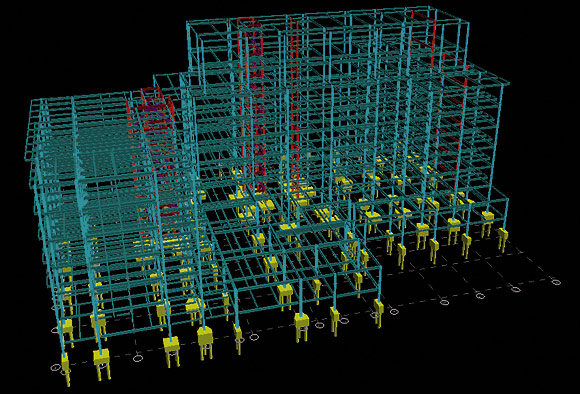 This multi-storey building model was created in eight hours

Version 10 of the RAM structural system is due to land on structural engineers’ desks — as a free upgrade — at the beginning of October.

New features include enhanced wall modelling and an FEA engine, allowing for openings to be easily placed anywhere on a wall and the resultant forces to be graphically displayed, while gravity wall load takedown automatically tracks wall loads to the foundations. Line loads can be placed anywhere on floor slabs and the software will accurately distribute the loads to supporting members. These features will benefit steel designers since in most buildings the steel frame interacts with other materials.

Integration with RAM CADstudio has been improved, as has the two way link with Bentley Structural – Drawing Generation and building information model software.

One company which will be benefiting from the upgrade is Robert West Consulting. The screen shot shows a multi-storey building modelled by associate Jon Bird in the first week of use.

Mr Bird used the system to create a full model of the structure in eight hours. From the model, the design of the beams, columns and lateral frames were automatically generated, producing calculations, material take-offs and drawings. Previously it would have taken four weeks each for the load take-down, beam design, column design and lateral stability assessment, analysis and design – with RAM it took under a week. 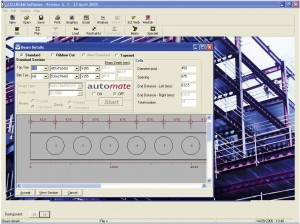 The latest version of Westok’s popular Cellbeam v5.1 software is christened  ‘Automate’ and is said to bring a new dimension to cellular beam design.

Composite cellular floor beams typically span up to 25m, whereas a roof beam the span can exceed 40m. For optimised use of material the beam sections are usually heavily asymmetrical, made from a light top section and heavy bottom flange, and their design presents numerous choices, the first being which standard sections to fabricate them from.

Automate will choose the most efficient combination of UB or UC sections, as well as varying the steel grade if needed, to suit the load and span within the constraints that might be  a fixed, a particular cell layout  or, perhaps, a  target maximum depth which the designer can set. The software logs each design combination, checking the critical failure modes at each section, adjusting section selection automatically to achieve the most efficient pass. The software also permits the designer to fix the position and size of cell holes to accommodate service runs while designs are  re-optimised.

The software was developed under the SCI’s strict QA regime. During calibration testing over 150 ‘expert’ designs provided by Westok’s specialist designers were compared with Automate performance. The software managed to beat the experts on several occasions. As part of the through-life quality management of the software  it will automatically check itself using internet communications to see if a new revision is available, and warn the engineer accordingly, offering an automated update.

An ambitious  programme of development work is now under way for the next Cellbeam software releases.