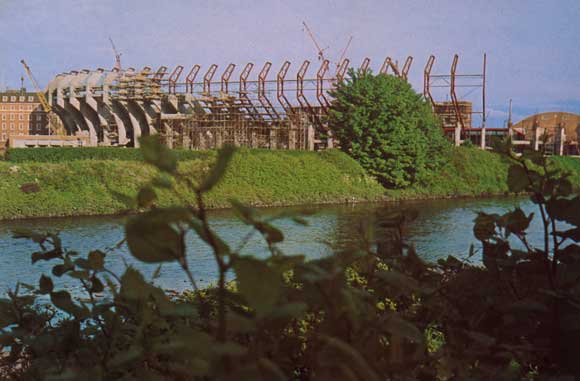 Construction of the grandstand seen from the banks of the River Taff.

When rugby is in the lifeblood of a nation it needs fine stadia for important matches. Mr J. F. James here describes the new stands being raised at the Arms Park, Cardiff, a worthy centre for international games.

If Wales should be deprived of food and drink Welshmen would find it distressing, if they were prevented from singing there would be a spiritual loss, but if they were stopped from playing and watching Rugby the nation would surely die. Devotion to the game is found everywhere, at all age levels and in all walks of life. Crowds would stand in any weather to see a good match and many games are played on open fields while still attracting enthusiastic supporters. However, for the principal matches played in the capital city it is important to have a ground offering covered seating accommodation and all the facilities required to cater for crowds of nearly 75,000, as well as committee rooms, offices etc. To provide the best of facilities the Welsh Rugby Union decided to reconstruct its ground at Arms Park, Cardiff, venue for all the most important events.

Cardiff Arms Park, as well as being the home of the Welsh Rugby Union, was also shared by Cardiff Rugby Football Club. The redevelopment of the Arms Park provides two rugby playing fields adjacent to each other. The main field will be used by the Welsh Rugby Union and the other by Cardiff Rugby Football Club. The new buildings have been designed to provide a grandstand for both these grounds. 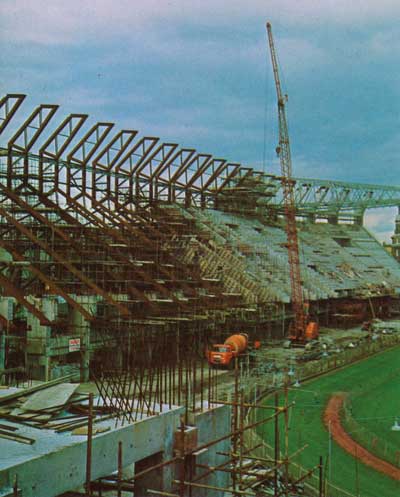 Several stages in building are seen in this picture of the North Stand. On the left are the main raker frames at 20ft centres; farther to the right they are enclosed in the shuttering used to cast the stepped terrace. On the extreme right the ‘L’ shaped precast terrace units are in place. Shuttering supported by the terraces is being placed for the upper frame sections to right of centre while the 126ft cantilever trusses have been fixed around this end quadrant.

In the full scheme the Welsh Rugby Union Ground will be almost entirely enclosed by the new type of grandstand, while the Cardiff Rugby Football Club field will have north and south stands. In phase 1, now under construction, the north stand of the Welsh Rugby Union stadium and the south stand of the Cardiff Rugby Football Club share a common structure.

The designer’s brief for the Welsh Rugby Union stadium was to provide room for approximately 74,000 spectators of whom 32,000 would be seated while 30,000 of the standing spectators would also be under cover. Similarly the Cardiff Rugby Football Club required a total capacity of 15,000 of whom 5,000 would be seated while 10,000 would stand. Construction of phase 1 began in September 1968 and is due for completion in April 1970. Matches were played in December 1969 and January 1970 as the construction programme allowed for partial use of the ground before the contract is completed. In this way the revenue from important international matches was not lost.

The entrance to the standing and seating terraces in both stands is by means of a concourse 12ft above the general ground level. Access to the upper terraces is by means of stairways at 60ft intervals from the concourse level. All seats are individual ‘tip-up’ type 18½ in wide. The changing rooms and toilets are located under the seating terrace of the Cardiff Rugby Football Club stand and the committee rooms and club rooms are located under the seating terrace of the Welsh Rugby Union stand at high level.

The foundations are in reinforced concrete at a depth of 8ft below ground level. The main frames and all structural members supporting the terracing are in reinforced concrete which is cast in-situ. Reinforcement to the main raker beams is in the form of hot-rolled mild steel beams welded into truss sections which are bolt spliced. Hot rolled steel was chosen for the reinforcement as it facilitates erection and the accuracy of line necessary to receive the lattice roof trusses. Formwork was carried off the steelwork which was sufficiently strong to support the shutters, props and self weight of the wet concrete. The seating terracing consists of precast units.

The cantilevered lattice roof structure is made from mild steel universal actions and is protected for long term durability. Roof sledding spans between the trusses without intermediate supports and consists of purpose-made plastic coated sections. The coloured coating ensures long maintenance-free life for the cladding while providing an attractive appearance. The trough sections are supported on pressed steel rainwater gutters which are underslung beneath bottom chords of the cantilevered truss.

Inset photo top: Bottom boom for the cantilever trusses showing the suspended gutter on which the cladding sheets are supported. The 126ft trusses are 20ft c/c on the straight and approximately 25ft at the springing round the quadrant. Maximum depth is 18ft 6in while the free end is 2ft 6in deep. Boom members are two 12in × 3in channels back to back with a 6in gap. Internal bracings are 6in × 6in universal columns.
Inset photo above: Top view of cladding sheets showing fixings to the suspended gutter. Cross section of cladding sheets designed to span 18-23ft