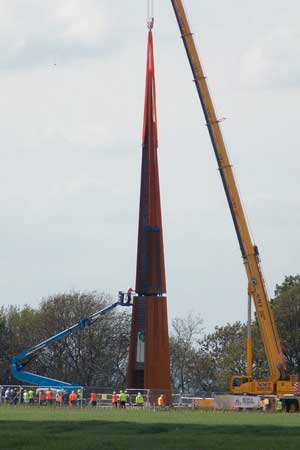 A 30m-high steel spire has been erected as the first part of a project to build a visitor centre and memorial in Lincoln, to commemorate the 55,500 servicemen who died serving Bomber Command during World War II.

The spire is formed from curved weathering steel plate tapering from 5.2m wide at its base to 700mm at the top.  The height relates to the overall wingspan of a Lancaster Bomber which was the most successful aircraft used by Bomber Command.

Steelwork contractor for the project, S H Structures, brought the 55t spire to site in two sections, a 10.440m long base and a top piece measuring 21.216m long.

Once the lower section was secured on its concrete foundation, the top piece was installed and held with a temporary bolted connection.

A few days later, the final exercise was to weld the joint between the two sections and then test the welds before locally shot blasting the steel to ensure an even patina is developed when the weathering steel gradually turns its familiar rusty colour.

The completed spire will form the centrepiece of the proposed future memorial garden from where visitors will be able to stand within the spire and see a framed view of the nearby Lincoln Cathedral.

“It has been a privilege being involved in this scheme which honours the thousands of aircrew who gave up their lives whilst serving with Bomber Command,” said S H Structures Sales & Marketing Manager Tim Burton.