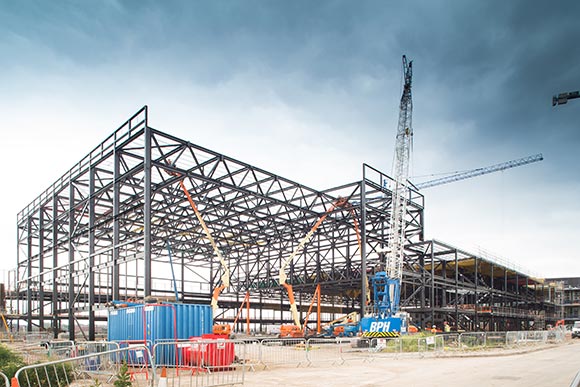 A grillage of long trusses has been installed to create the column free spaces for the three halls of the Exhibition Centre Liverpool. Martin Cooper reports.

Restaurants, bars, hotels and museums now occupy land that used to accommodate warehouses and docks for the once busy port.

Situated on the riverfront and one of the major contributors to Liverpool’s regeneration is ACC Liverpool, home to the BT Convention Centre and Echo Arena, which opened in 2008 as part of the city’s European Capital of Culture Year.

The ACC Liverpool (see NSC October 2006) has become one of the leading venues in the north of England and is said to have generated £760M in economic impact.

To build on this success a new exhibition centre with a combined hotel is being constructed alongside the ACC Liverpool. A 35m-long footbridge will link the two buildings to form what is claimed will be the only purpose-built interconnected arena, convention and exhibition centre in the whole of Europe.

Known as Exhibition Centre Liverpool (ECL), the building is 164m-long by 85m wide and will offer 8,100m² of exhibition space.

It has three large halls, each measuring 60m × 45m, that can be used separately or opened up via sliding partitions into one large space. 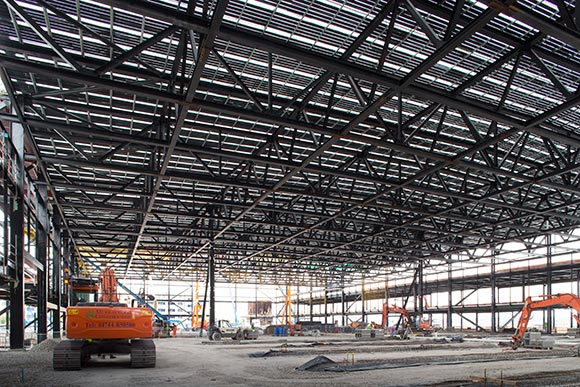 The building’s frontage, overlooking the River Mersey, features a fully glazed double height public concourse that runs the full length of the structure. Above the main concourse there is a first floor level accommodating meeting rooms and offices.

Commenting on the architectural design of the ECL, Denton Corker Marshall says, the language and materials of the main façades draw on the industrial heritage of the Liverpool docks, while the public concourse’s glazed ribbon wall provides the public face of the building.

It is however the exhibition halls that are the main feature of the ECL. Creating such a large column free space, albeit one that can be divided into three separate zones, meant a steel-framed solution for the building was the only way to go.

“The design of the ECL, excluding the hotel, was always going to be steel because it is the most economical way to create flexible long span areas,” says Frank Joyce, ISG Project Director.

The roof structure consists of a two-way spanning grillage of long span trusses each with a minimum overall depth of 3.5m. The roof has a 1.5 degree pitch and this is built into the grillage with varying truss depths.

The trusses have been designed to absorb some big loads as the roof of the ECL will have rigging and lighting hung from it. Each 5m × 5m grid of the roof steelwork can take maximum single loads of either 5t in hall C or 3t in halls A and B. 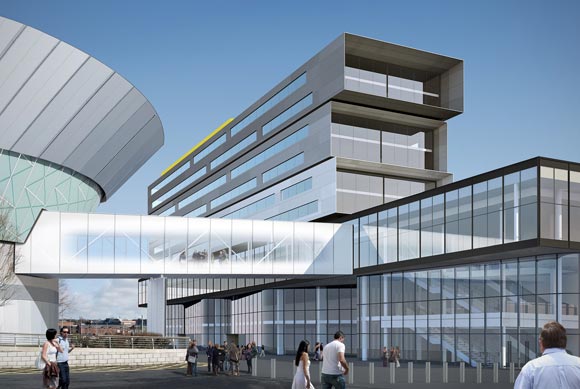 “As well as the large loads that have to be accepted by the roof trusses there are also some tight deflections which have to be taken into account due to the sliding partitions between halls A and B, and between B and C,” says Ian Leaper, Booth King Project Engineer.

Halls A and B are identical with a height of 10.5m to the underside of the trusses, but hall C has extra headroom and is 16m high. This extra height will allow hall C to accommodate rock and musical stage shows.

The roof grillage is supported on perimeter columns with two additional internal columns at the interface of hall A and B.

The sliding partition between these two halls would have meant this truss being much deeper than its neighbours and consequently disrupting the roof top design. The most economical solution was to install two internal columns to help support the partitions and position them where they will ordinarily be hidden from view within the dividing wall.

Putting the columns between halls A and B should not infer with the ECL’s large concert holding abilities as it is envisaged that C and B will accommodate the stage and standing areas, while A would be portioned off and house the back-of-house facilities.

Between hall B and C, an 11m-deep truss accommodates the roof height change.

Weighing more than 50t, the 11m-deep truss has a span of 60m and deflections would have been onerous taking into account the sliding partition between hall B and C. To support the partitions cost effectively an independent truss does the job. It is restrained laterally by the 11m-deep truss, but takes no load from the rigging primary loading.

For the steel erection Billington Structures had to bring the 11m-deep truss to site in sections, which were then lifted by a 50t mobile crane to form the finished item. Temporary columns were installed to provide stability during this part of the erection programme.

For the roof erection Billington brought the steelwork to site in 20m-long transportable sections.

“Using two 60t capacity crawler cranes the truss erection procedure involved lifting two 20m-long sections into the air, bolting them together and then, with one crane holding both sections, the other was able to lift up the third section that was bolted on to complete the truss. Both cranes then lifted the completed 60m-long truss into place,” explains James Hindley, Billington Structures Project Manager.

Including the supporting columns and interconnecting bracings (which provide the majority of the structure’s stability), Billington says each hall took approximately four weeks to fully erect.

Practical completion of the ECL is expected in summer 2015, with the official opening approximately six months later in the winter. In its first year of operation it is expected to host about 50 events and attract more than 250,000 visitors. 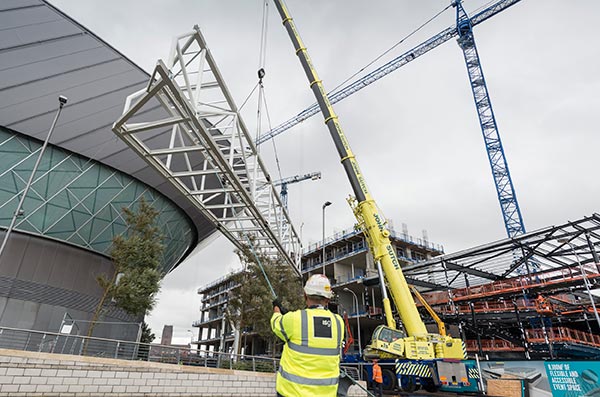 The final piece in the steel erection jigsaw was the installation of the 35m-long footbridge link between the ECL and the ACC Liverpool structures.

The bridge was brought to site as 12 pre-fabricated steel sections, assembled and then lifted in to position.

Alan McCarthy-Wyper, managing director of ISG’s construction business, commented: “Whilst the bridge will not be handed over until the development is complete, the positioning of the steelwork marked a major milestone for this project.

“The bridge will form a physical and metaphorical link between Liverpool’s past and its future which will become a lasting landmark for the city.