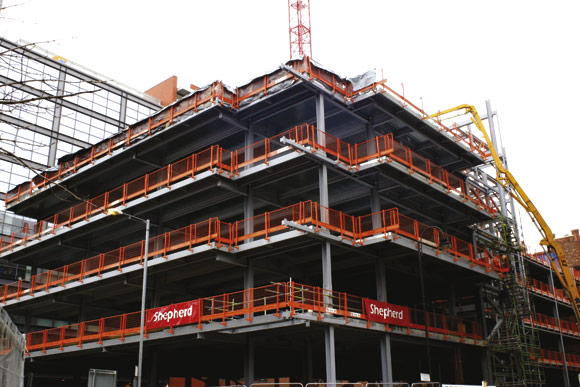 Steel replaced concrete as the framing material on a combined office and residential development in Manchester on which designers had to contend with differing floor levels at the front and back of the building.

Developers switched to steel for phase two of the prestige Rossetti Place development in Quay Street, Manchester, to gain cost and programme benefits, after phase one had been built in insitu concrete.

The restricted nature of the site meant there was limited space to accommodate concrete equipment, giving steel another advantage.

The site’s mixed commercial and residential use accounts for an unusual feature of the development, with floor levels in the front, commercial part, of the building not coinciding with the rear, residential part.

Phase two, known as Bauhaus, will provide 50,900sq ft of office space plus 65 luxury apartments. The commercial/residential combination came about because outline planning permission for the site stipulated mixed use. Commercial developer ASK and residential specialist Crosby Homes came together to develop the site. Shepherd Construction was awarded the £16.7M construction contract. The decision to adopt a vertical split between the two uses was made because the site has a substantial frontage on to Quay Street, in Manchester’s business district, making this the obvious place for the offices. 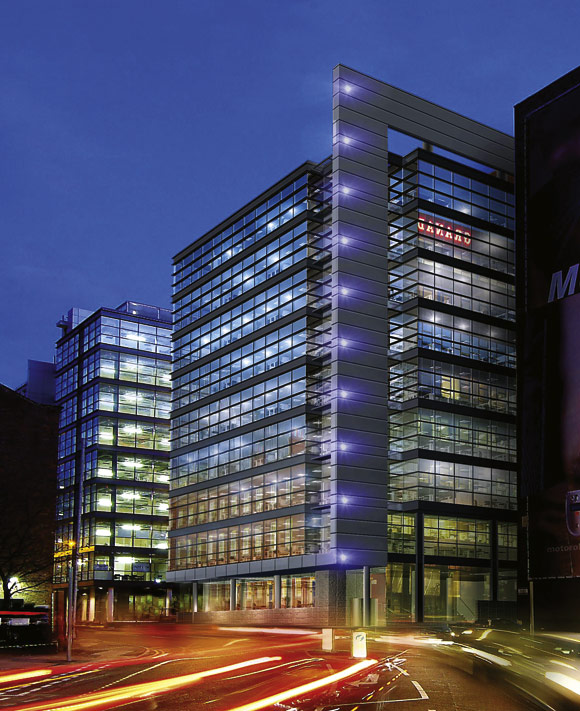 Artist’s impression of the finished building 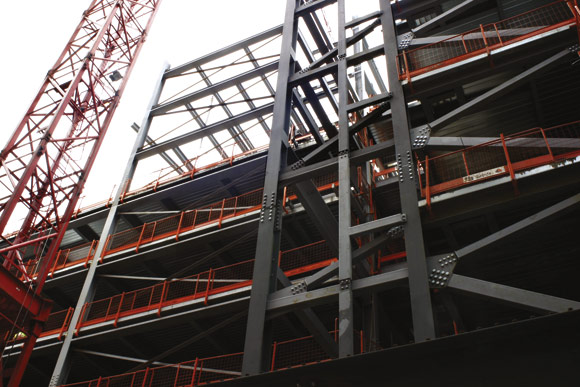 Apartments, seen here to the left have a lower floor to floor height than the offices 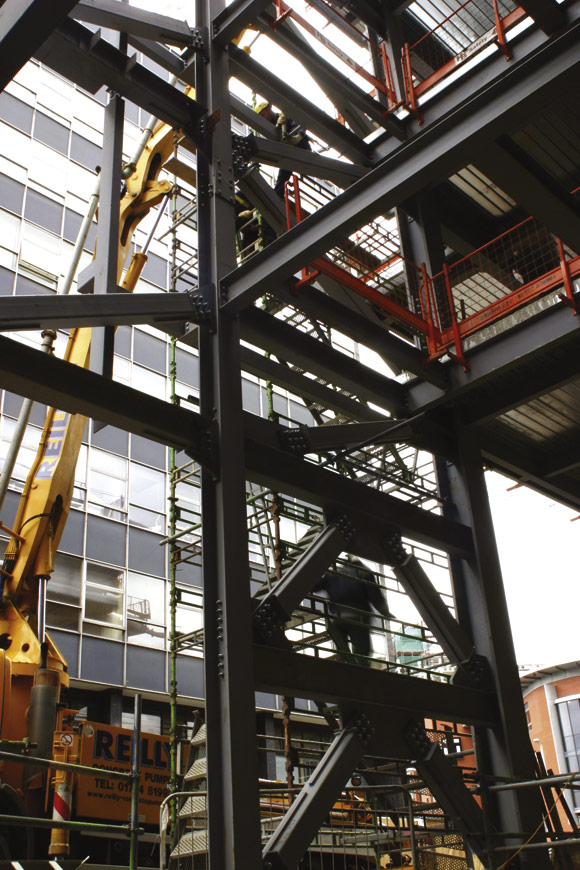 Different floor levels complicated the design of columns and bracing

The Quay Street elevation will be clad in curtain walling to provide an imposing frontage to the office development. The residential elevations will use metal and timber panels with rainscreens, and brickwork.

Ove Arup & Partners was responsible for the scheme design both for the original project and the change to steel. Conder successfully bid for the detailed design and construction of the steel frame.

Conder was appointed in a two-stage tendering process. At an early stage after the decision to go for steel in phase two, Conder produced a tender design to establish the cost of the project before going on to win the job proper in the second stage.

“From a design point of view one of the interesting things was the fact that the residential part had different floor-to-floor heights to the offices,” says Conder Managing Director Gordon Ridley.

The storey heights are 3m floor-to-floor in the residential area, and 3.6m in the more heavily serviced offices. Ground and first floor levels are the same throughout the building; residential level seven is close to office level six, but none of the other floors coincide. In total there are 11 residential floors and 8 office floors, with two levels of car parking at lower ground and basement. Mr Ridley says the whole building was modelled as one frame. “On the grid line common to both, quite large columns were needed to help restrain the floors. A combination of steel grades and column orientations were investigated to minimise the impact on the internal layouts.”

The differing floor levels also made design of the structural bracing in the main dividing wall more complex, adds Mark Elsegood, Associate Structural Engineer at Ove Arup. “Crossed flats are used, except in cases where the beams were so close in level that diagonals were impractical.” In these cases the beams and columns were welded together to form a moment frame.

Generally, the main beams are 533mm deep in the commercial area and 305mm in the residential. A number of holes ranging from 150mm to 350mm were cut by Conder through the beams for service runs in the offices.

Despite steel’s advantages for construction of the frame, the lower ground and ground floors, above the two car park levels, are in insitu concrete. The project services engineer insisted on a completely flat soffit to the parking levels to allow extract fans for removing fumes to operate effectively. The columns, however, remain in steel down to the foundations.

Having to cast two insitu floors before the rest of the steel frame could go up would have had severe disadvantages for the programme, giving the construction team some of the usual headaches associated with concrete frames. Instead, the lowest columns span from the basement to the first floor and can carry the loads imposed on them during construction without restraint against buckling from the insitu floors. The columns are between 9m and 11m long with the heaviest section, a 355 x 406 x 467 UC, weighing 5 tonnes.

“We checked the higher slenderness ratio and found that in some cases a small increase in the column weight was enough to carry the loads in the temporary condition,” says Mr Ridley. “In other cases we were able to brace the columns temporarily.”

As a result the insitu concrete can be cast at any time until the frame is nearly complete.

For the floors Conder installed decking three levels at a time. Typically, with the frame up to level four, decking was put in place at that level, so it could then be used as a working platform for erecting upwards, as well as providing the necessary crash deck and diaphragm to the structure.

A Conder innovation with beam ends has made the erection process faster. “To speed erection, Conder introduced the use of beam end plates with two extra bolt holes — 10 instead of eight — where two beams are to be bolted together through the web of a column,” says Mr Ridley.

“This allows one of the beams to be erected first, and work to continue on installing decking on that side of the column. When the time comes to erect the second beam on the other side of the column, the two extra bolts hold the first beam in place while the other eight are removed and reconnected through both beams.”

The building is designed to achieve a two-hour fire rating, using intumescent paint to protect the steel beams, while the columns are enclosed in plasterboard. Internal walls are constructed in a metal stud partitioning system to avoid wet trades.

Total weight of steelwork in the main steel frame is 885 tonnes. Conder is also supplying 11,226m² of decking.

Conder is currently midway through the 26-week construction programme and had reached the fourth floor of the offices and seventh floor of the residential structure by the end of April. The structure is scheduled for completion in September, with overall completion of the building in June 2006.