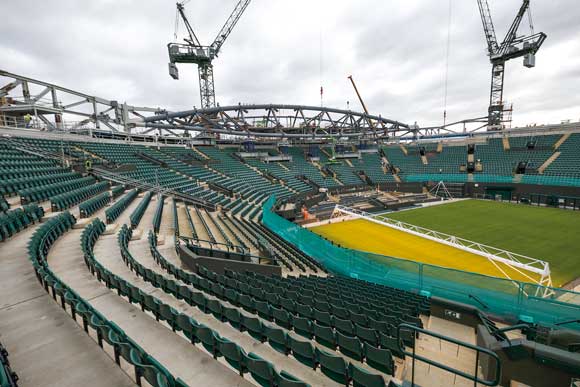 A retractable roof, which will allow uninterrupted play irrespective of the weather, is being installed over Wimbledon’s No.1 Court. Martin Cooper reports from the home of lawn tennis.

FACT FILE
Wimbledon No.1 Court Retractable Roof
Main client: All England Lawn Tennis Club (AELTC)
Concept architect: Grimshaw
Main contractor: Sir Robert McAlpine
Structural engineer: Thornton Thomasetti
Steelwork contractor: Severfield
Steel tonnage: 6,000tEach year there are two weeks during the summer when most people in the UK become tennis fans. Whether they go and attend the event or watch it on television, seemingly nobody is immune and able to avoid getting sucked into the excitement and drama that unfolds during The Wimbledon Championships.

In order to maintain The Championships as the world’s premier tennis tournament played on grass, The All England Lawn Tennis Club (AELTC) has developed the Wimbledon Master Plan. Central to this are the improvements currently being undertaken on No.1 Court. This work includes two additional tiers with 900 seats, new hospitality facilities and improved public catering areas, and most importantly a new fixed and retractable roof.

Similar in design to the one spanning Centre Court [See NSC July/August 2009], the roof will guarantee uninterrupted tennis on Wimbledon’s second largest court, regardless of what the notoriously fickle British summer weather ushers forth.

The retractable roof is based on a concertina design with two main sections that meet in the middle. It will be made of transparent Gore Tenara (a type of Gore-Tex fabric), which is stretched between steel trusses.

According to SCX, the company responsible for the design and supply of all the mechanical and electrical equipment, around 220 electro-mechanical devices (including motors), will be needed along with a control system capable of working to accuracies of a fraction of a millimetre, to ensure the roof operates smoothly and quietly. 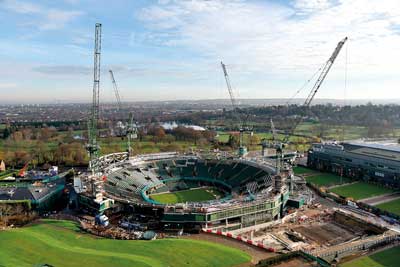 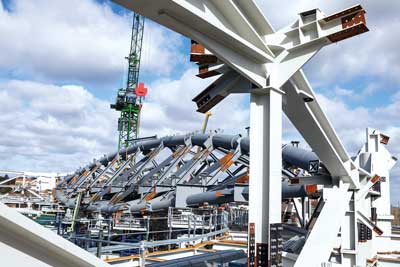 Covering an area of about 5,500m², the new roof can be deployed or retracted in around 8 minutes.

There are 11 steel trusses in total, each spanning 75m across the top of the court, and each having an overall height of 6.5m.

“Having no fixed restraining arms attached to the surrounding fixed roof, this truss needed to be a different shape.”

Allowing the roof to move, the ends of each truss are supported on a wheeled bogie that moves along rails that are fixed to the new superstructure of No.1 Court. This superstructure includes five more trusses that surround the arena, with two of them, east and west, primarily supporting the retractable roof.

“All sections for these trusses were installed by the site’s four tower cranes. They were constructed on temporary works and the booms were incrementally welded together to form the full truss and then laced together via a bracing structure,” explains Severfield Project Manager Darren Brockhouse.

Truss boom sections varied in size, from 8t up to 22t, and consisted of CHS sections ranging in length from 8m to 15m. Stability and support for the trusses is provided by eight existing concrete cores and three jumbo 1,083mm-diameter CHS columns. These were threaded through the stands and founded on the concrete sub-structure.

Any construction work undertaken at Wimbledon has to be done around the tennis schedule. Nothing can get in the way and obstruct The Championships taking place during its allotted two weeks.

Consequently, the Wimbledon No.1 Court project is being done over three phases, with two breaks in the schedule to allow The Championships in 2017 and 2018 to take place.

The sequencing involves a large logistical exercise, whereby all construction equipment and materials are decamped for the duration and then brought back a fortnight later. All areas where construction work has taken place must also be made safe to allow spectators to fully use the prestigious tennis venue.

Having successfully completed the similar roof over Wimbledon’s Centre Court, Severfield has used this experience to organise its three-phased steelwork package.

Installing the east, west and north-west trusses, along with all of their supporting steelwork, formed the majority of Severfield’s first year works. However, the company also installed some cantilevering steelwork that will form new hospitality and access walkways around the upper external levels.

“The tension ring installation was a combination of pre-welded assembly units and site welding to form a complete ring. This inner roof structure is then braced using a mixture of tubular and I-sections. The inner gutter then hangs off the tension ring which forms the gutter and bullnose surface for the inner roof,” says Mr Brockhouse.

An array of air conditioning units will be hung from the fixed roof, needed to keep the court and its all-important grass condensation free when the retractable roof is deployed.

Since late summer, Severfield has been carrying out its year two works, which include the installation of two further trusses, north and south, and their adjoining inner fixed roof sections. The north truss is 76m-long x 9m deep, weighing 195t, while the south truss is 68m-long × 5.7m-deep and weighs 168t. These two trusses complete and form the rooftop of the arena, while the north truss also supports a large amount of plant equipment.

Currently, Severfield is also assembling the 11 retractable roof trusses on land adjacent to No.1 Court, which was formerly occupied by two grass practice courts and two other hard courts.

All the trusses will be stored on this site until after The Championships 2018. They will then be constructed as part of the company’s year three works programme. Using a 600t crawler crane, each truss will be lifted over the court into position, topping off the main element of Wimbledon’s Master Plan.