Posted on November 1, 2010 by NSC2 in Advisory Desk, Technical

The Advisory Desk has received a number of questions regarding the tension resistance tables provided in the “Eurocode Blue Book” (SCI publication P363) for single angles connected through one leg by welding or bolting. This AD clarifies the basis of the values in P363.

For Eurocode design, four checks are required for angles connected with bolts:

In general, for angles connected by one leg, the ultimate resistance according to check 4 above will govern. Block tearing could be critical, but is unlikely for orthodox connection arrangements.

The Eurocode provisions for check 4 are limited in the arrangement of bolts that they cover. Clause 3.10.3 of BS EN 1993-1-8 only covers the arrangement of a single line of bolts along the length of the angle, as shown in Figure 1. Different rules are presented for 1, 2 and 3 or more bolts.

BS EN 1993-1-8 does not cover the situation when there are two or more bolts across the angle leg, as shown in Figure 2. This arrangement is often used to minimise the size of the connection components, such as the gusset plate. 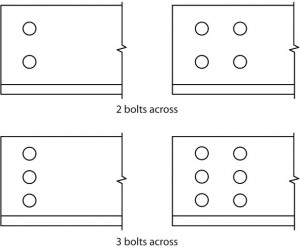 Figure 2: Bolt arrangements not covered by the Eurocode (Two or more bolts across)

Since both bolted arrangements were covered by BS 5950-1:2000 (clause 4.6.3.1), it was decided that P363 would adopt the BS 5950 rules for check 4; this is made clear in the explanatory notes. In addition to providing more comprehensive coverage of practical connections, this choice does have some advantages, because the calculated resistance is independent of the spacing of the bolts. Resistances calculated according to BS EN 1993 1 8, 3.10.3 are dependant on the spacing of the bolts.

The lack of coverage in the Eurocode has been brought to the attention of the responsible committee, and there are indications that a rule will be developed for multiple bolts across the angle leg.  In the meantime, it is considered that the tension resistances for single angles quoted in P363 are appropriate for design, even though they are based on BS 5950 rules and not strictly in accordance with the Eurocode.

For Eurocode design, for angles connected with welds the governing check is for the resistance of the effective cross sectional area, using the yield strength, fy, as required by BS EN 1993-1-8, clause 4.13. This clause defines effective cross-sectional area for equal and unequal leg angles.