Samlesbury Bridge spans the River Ribble on the Preston By-Pass. It is an all welded structure with two 120 ft side spans and a 180 ft centre span.

SPEEDING THE FLOW
The continued injection of new vehicles into the already sluggish flow along Britain’s main traffic arteries has long threatened the country with a state of vehicular thrombosis. Fortunately, however, the symptoms have been recognised, the disease has been diagnosed, and now the remedy of wider and faster roads is being applied.
These plans have called for the building of a great number of bridges to carry the new roads over rivers and existing roads, and the majority of bridges being built in Britain today are directly connected to the road programme.

STEEL SPEEDS ERECTION
The need for speed of erection is vital in bridge construction, especially where the work interferes with an existing road system. Steel meets this need more efficiency than any other building material: the time for assembly of steel on site is less than for its competitors by a considerable margin. It can be fabricated away from the site and erected as soon as the abutments and piers are ready to receive it. It also requires less temporary support during erection and there is therefore a minimum of interference with the space beneath the structure.

One of the most publicised aspects of the new road programme has been the Preston By-Pass, and a good example of a bridge on this By-Pass is the Samlesbury Bridge – a three span structure across the River Ribble. It is of all-welded construction, and each of the eight triple steel girders incorporated in its 420ft length weighs 158 tons. The girders were conveyed to site in lengths of up to 105ft and the joints were site welded. The bridge carries dual carriageways, each 24ft wide, and a 32ft wide centre reserve has been allowed for future developments.

LONG SPAN PROBLEMS
Various difficulties confront bridge designers when it comes to spanning long distances, and the Queenshill Bridge – spanning the River Severn between Tewkesbury and Upton-on-Severn – shows how steel can help to reduce such difficulties to a manageable level. The total length of the bridge is 2,468 ft; the middle 500 ft comprises two 131ft river anchor spans, two 65ft cantilever arms and a 108ft suspended span, all of steel construction. The use of steel avoids the necessity for sinking piles in the river bed.

The arch of the Conway Road Bridge – which replaces the 132-year-old suspension bridge – has a 310 ft span carried on four steel ribs. 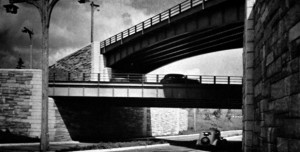 Steel bridges carrying traffic over a road in the Queens area of New York. These are typical of the smaller American bridges. 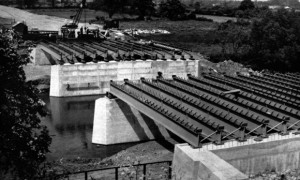 One of the eight bridges forming part of the Catterick By-Pass scheme, the Cataractonium Bridge is here shown during construction. The new universal beam is being used in its construction.

PRESERVING CHARACTER
A noteworthy feature of the Conway Road Bridge – a single-span steel arched type – is the way in which the design has been managed so it blends with its background. The bridge, which replaces the 132-year-old suspension bridge, has a 310 ft deck span comprising four steel ribs, supporting a deck of steel buckle plate and concrete, The arch is faced with fascia plates.

Another example of this blending of modern structures with their surroundings can be seen in the Queens area of New York. Here it was necessary to construct two bridges, one over the other, without interfering with the character of the surroundings. This was accomplished by using simply-styled steel structures on foundations faced with natural stone.

INCREASING EFFICIENCY
The bridge building side of the structural steelwork industry is today making use of the newly available universal beams which are described elsewhere in this issue. The Cataractonium Bridge incorporated universal beams 36in by 16½in in its two 56 ft sides pans and the 75 ft centre span. The reinforced concrete decking for this bridge – which is one of the eight built for the Catterick By-Pass scheme – will be a composite part of the whole structure.

THE FUTURE
All these bridges, large and small, are making a truly vital contribution to the problem of speedily supplying all countries with the efficient road systems todays traffic demands. In view of the advantages that steel has to offer – prefabrication, speed of erection, versatility – it is not surprising that this well tried medium is so widely favoured.