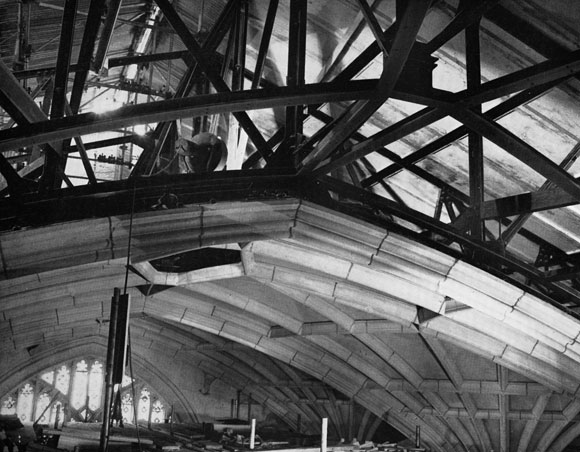 (From a report by Lord Holford, FRIBA, MTPI)
King Henry VI was the founder of Eton Col- lege Chapel, which was built, as we now know it, from 1449-1460. After a lapse of over ten years it was roofed in 1475, the ante chapel being completed seven years later. The piers, the internal proportions, the ex- ternal buttresses are all splendid, but the original wooden roof must have been the simplest and cheapest possible. None of it now survives except for fragments laid on the wall plates or on brackets from the heavy oak timbers of the roof of 1699, and these are now preserved in Eton’s museum.

The 1699 roof was of oak, the main beams of the half-trusses that sprang from the top of the piers being over 20 feet long and with a section roughly 14 in. by 14 in. Almost from the start they housed the death-watch beetle, who found food and drink in the moisture of the low-lying river valley and in the oak protein of the wood. Beetle were heard and observed in the seventeenth and early eight- eenth centuries and attempts were made to eradicate them, entirely without success. One difficulty was that without internal scaffolding specially erected, the ceiling of the chapel, some 70 feet above the ground, could not be reached. Above the rafters it was boarded and covered with lead. On the underside great cobwebs grew undisturbed: and later, when the Victorian stained glass of the windows was shattered during the sec- ond World War, bats and birds nested in the dark corners. 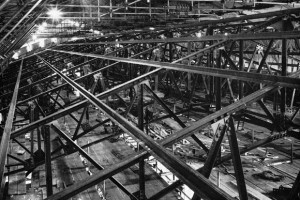 After the war major repairs were put in hand. The lead covering the roof and its enormous gutters was found to be defective, and tell tale pellets of the death-watch beetle began to appear on the floor of the Chapel in in- creasing quantities.

By the summer of 1956 it had become nec- essary for the College to face the expense and inconvenience of erecting a section of scaffolding to reach the roof, in such a way as to permit daily services to continue. But when the roof was reached it was found that some of the timbers were only paper thin. It was clearly unsafe to hold services at all, and the chapel was closed, not to open again till 1959.

The Provost and fellows asked their archi- tects for an immediate report on the Chapel roof and a scheme for its repair or recon- struction in timber. This was done but sub- sequently rejected on the score of high cost and slowness of execution. There was also the difficulty of insuring against continued beetle infestation.

Eventually one of the Fellows asked the in- evitable question: ‘Why should we set out to provide fodder for these insects? Why not build a new roof without any timber at all?’ This was a completely revolutionary sugges- tion, and caused immediate argument and discussion.

The architects finally decided to examine other roofs of the period, and after much study, concluded that roofing at the time was highly experimental and empirical, and that designs for vaulting, although planned with great care and executed with immense skill, might sometimes have been quite dif- ferent in result or in compromise from what had been generally in mind when the foun- dations of the building were laid.

The significance for fan vaulting of the ra- tio between the width and depth of the bays (at Eton 2:1) was observed and the space between the vault and the roof. At Kings college one can walk upright over the vault,

whereas at Eton there would be no space at all if the fans were fully developed, ie if the largest of the concentric ribs met at the apex of the vault. But if a rather flat cross section were adopted the central part of the ceiling could be sustained by a pattern of ribs which are effectively liernes. The geometry of a fan vault could then be used. Even so there would be very little room between the top of the vault and the outer roof. If the truss could not be of wood it must be steel: and this would not only be lighter in weight but so designed as to provide the right pitch for the outer metal covered roof, and to allow a cat walk in the intervening space. 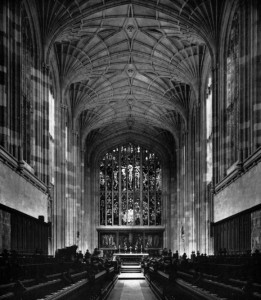 The roofing of the chapel by a vault de- pended on the solution of a teasing struc- tural problem, that of building the ribs of the vault without centering. A temporary hood, covered with waterproof sheeting, could be erected over the whole interior volume of the Chapel; under this the wooden trusses could be dismantled and the steel trusses assembled. But the light steel scaffolding in the in- terior would not be adequate to carry centering for stone ribs. It was therefore thought preferable to construct any vault decided upon from above rather than below.

At this point it was decided to use the steel truss – the mod- ern equivalent of timber – for centering. The fabricators were asked if they could produce a bottom member of the truss to follow the precise curve of the transverse ribs, and in the form of an inverted ‘T’. This made it possible to hang the sec- tions of the masonry arches onto the steel angles by means of bolted steel clips and the masonry ribs by the use of bolts and lead tamps. In the end they did this with great skill and pre- cision, almost as if they had been dealing with hand wrought iron rather than steel, handling the sections with immense care and protecting the metal from corrosion at all stages and into the foreseeable future. The first courses of each fan were sprung in solid stone, and as the stones began to over- hang they were clipped and bolted to the supporting steel- work until the whole arched rib settled into its final position, with dry joints between voussoirs.

The other roof, whose ridge is now about two feet higher than it was formerly, is merely a weatherproof and thickly insu- lated covering for the vaulting and roof space beneath it, but needs to be as light as possible. The lead was replaced by thick, very pure aluminium used in a combination of hard flat sheet and softer metal for rolls, flashing and gutters. It had to be protected against electrolytic action. Over the years the metal has oxidized and now resembles the lead it has replaced. It will also be much less costly to repair than lead, and is proving to be as durable.