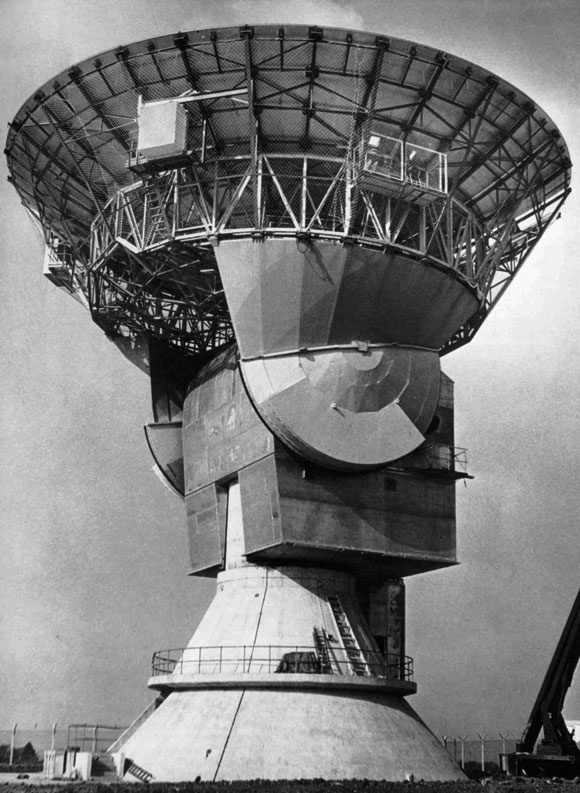 The 82ft diameter steerable aerial at Chilbolton, Hampshire, for the Radio Research Station of the Science Research Council has now reached the final stages of erection and commissioning.

It is to be used for investigation into the propagation of radio waves, radiation from radio stars, for the tracking of artificial satellites and space probes, and will transmit and receive signals in the frequency range 100 to 10,000 M/cs. It incorporates the latest advance in constructional methods to obtain a stable parabolic surface accurate to within about 0.1in. A digital control computer will provide the tracking information for the electrical power servo-mechanisms controlling the azimuth and elevation motions of the aerial. This fully steerable aerial is the only large aerial in the United Kingdom specifically designed for satellite tracking apart from that at the GPO satellite communications terminal station at Goonhilly.

The complete aerial incorporates a steelwork structure weighing 52 tons and is designed to withstand winds of up to 100 mph and for a life of 20 years. It is supported on a 51ft high concrete tower with a 60ft diameter base. 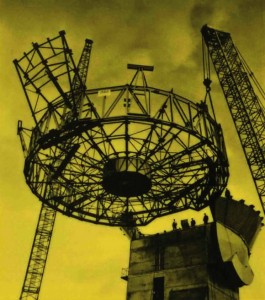 The reflector surface comprises aluminium honeycomb sandwich ‘petals’ fitted to a steelwork support structure by expansion joints. This circular structure is an open framework constructed from all-welded sub-frames bolted and dowelled together on site. It is 82ft in diameter and 5ft deep at the centre and designed to follow the contour of the reflector and provide the surface with the required lateral and torsional stability.

The primary structural member is a ring girder measuring 56ft in diameter by 10ft deep, supported over two quarter arcs: for ease of transport and erection it was constructed and delivered to site in four all-welded quarter sections. Sixteen frame girders converge from the ring girder to a central hub, and radiate outwards to the periphery.

A secondary 73ft diameter ring girder gives additional support to the outer radial frames and, in conjunction with the 16 intermediate outer radial rakers, provides adequate support for the outer area of the reflecting surface. The frames and rakers are braced together on the front and rear faces, the circumferential ties forming continuous hoops. The centre hub houses electronic equipment and is constructed of steel plate suitably gusseted.

A trial erection was followed by load testing of the structure to check the stiffness and natural frequency. Site erection of the 56ft ring girder unit was carried out at ground level and the sub-assembly then lifted to its final position, the structure at this stage weighing 37.5 tons.

All the civil, mechanical and electrical engineering work is being carried out under the cooperation of the Ministry of Public Buildings and Works. The main contractor was responsible for the design of the aerial.