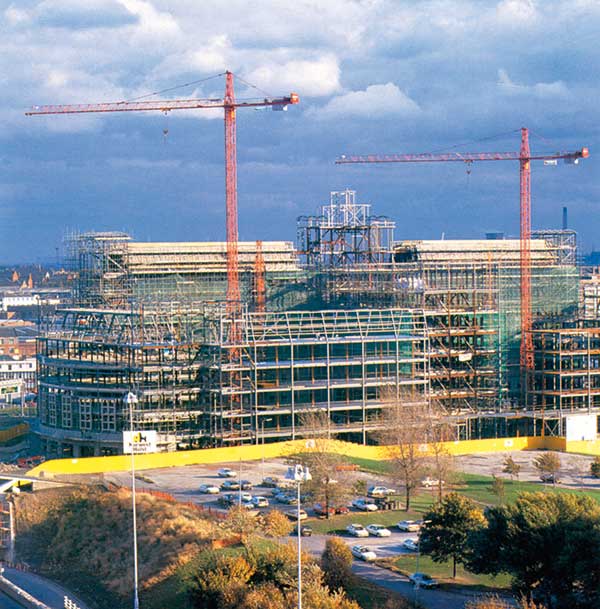 Described as a landmark building for the Quarry Hill area – which is being master planned by Terry Farrell – Quarry House includes 400,000 sq ft of office space for an anticipated 2,000 staff, together with a range of recreational facilities and extensive landscaping.

The new Headquarters of the Department of Health and Department of Social Security has risen to form a milestone in both construction and procurement. The client chose to adopt the design and construct route for procurement in order to achieve a very tight programme and Norwest Holst construction, (itself a subsidiary of the French construction giant SGE) was successful in securing the £57 million D & C package. BDP of Preston acted as Norwest Holst’s Architect and Designer with George Depledge as Steelwork Contractor. Project Manager was AMEC Projects. 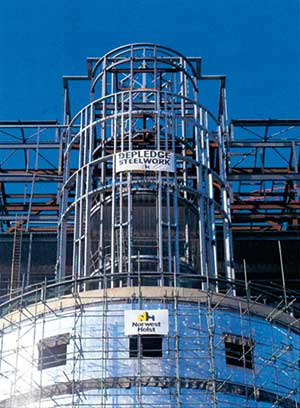 While responding to the concept design laid down by AMEC Projects, and to the master plan, BDP developed a design seeking to establish an appropriate image for this important civic building.

The reference design is based on a central axis, on which the building is placed symmetrically. The west elevation, with views down the site, terminates the axis of the Headrow-Leeds great boulevard, with a grand arch as the formal entrance to the building.

An essential stipulation of the design brief was for a traditional building with a contemporary look and a strong civic presence.

Quarry House is a formal design; the base is a granite plinth; the middle is a brick elevation incorporating York Stone; and the top is a slate mansarded roof. A curved theme is used throughout the building, from the striking entrances through the atria and into the design details. Two internal courtyards with atria are landscaped and form the corporate heart of each state department.

George Depledge & Co Ltd (a wholly owned subsidiary of Norwest Holst) fabricated and erected the steel frame which contained 3,000 tonnes of structural steelwork comprising over 12,000 pieces of steel. Depledge won the £2.5m contract partially due to the low transportation costs from their works at Midland Road, Leeds – only one mile from the site.

The client also saw a definite advantage in the selection of a fabricator that was certified to BS 5750: Part 1 (through the Steel Construction Q.A. Scheme Ltd). The quality systems that permeate Depledge’s entire operations engendered client confidence in the success of the project.

This confidence was rewarded as lead time achieved from the receipt of client drawings to commencement of erection was less than 6 weeks. (The programme also required that Depledge achieve some of the fastest erection rates seen in the UK). This feat was made possible by meticulous planning, rapid fabrication and close co-operation between designer, contractor and fabricator. After fabrication the steel was shaken out at the works and delivered sequentially to the site on lorry mounted steel racks. Every lorry load contained several racks and each rack contained several pieces. The racks were delivered to site and lifted directly from the lorry onto the superstructure to suit the day’s erection plan – this procedure minimised waiting time and maximised speed of erection.

The design and construct methodology enabled a number of major changes to be made to the structure during construction in order to reduce costs. These changes took place without having ana adverse effect upon programme. The project is currently within budget and on programme despite quite a heavy loss of time through inclement weather. The speed and flexibility of construction have made the project a fine example of the design and construct method of construction on a large scale and have proven the value of Depledge’s commitment to quality.