From Building With Steel, February 1961 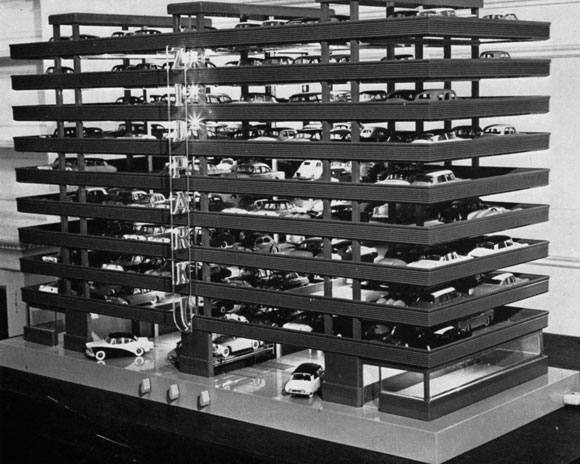 Scale model of the first Zidpark to be built in Britain on a 52,000 sq ft area between Upper Thames Street, London, and the Thames

The first multi-storey, fully automatic car park in Britain is being erected on a Thames-side city site. This is the Zidpark, which will be electrically operated on the push-button system and is claimed to absorb cars off the adjoining streets at an estimated rate of 250 in half an hour.

In the Zidpark system the cars are moved mechanically on to a steel berth which is lifted automatically to a suitable position and then stored, again mechanically. The Zidpark is planned to accommodate 464 cars on eight floors (it will be a seven storey structure with basement) and there will be 16 lifts. With additional covered facilities at ground floor level, there will be parking for over 500 cars in all. Four hundred tons of structural steel are being used in its construction, quite apart from that used in the lifts.

Cars are moved sideways onto conveyors of cross bars rotated by endless chains as well as upwards by the lifts. Each of the car berths has two synchronised conveyors for the front and rear wheels respectively.

Transport of the car to its parking berth and subsequent removal is automatic – neither the attendant nor the driver need accompany it. All movement flows from control panels at the ground floor level.

The park is divided into sections, each section having a lift and serving four spaces on each floor level. They layout of the control panels corresponds to that of the parking berths. A hole, with a numbered plug, represents each parking berth and is plugged in as each space is selected.

On arrival a car is directed to the conveyors adjoining the lifts, the engine is stopped, the brake is applied and the driver leaves after receiving a numbered counter corresponding to the numbered plug selected by the operator.

The operator the inserts the numbered plug into the control panel and the car is taken automatically to the selected berth. There is a similar process in reverse when the car is called for  but, if when de-parking the operator has to obtain the car from an inner position he transfers an outer car to a vacant space which is always left free.

Although the first Zidpark is to be housed in a rectangular building, the system does not require a rigid layout and can be applied to sites of varying shapes and sizes and the existing buildings.

The design of one highly original type of stacking car park is based on the familiar ‘Big Wheel’ of the fun-fair. It has card carrying platforms instead of gondolas and the cars travel up or down perpendicularly instead of in a circle.

The device, known as the Butterley Simm Wulpa Car Lift, has been invented by a Swiss engineer and is now being made in Britain.

The car park is a skeleton steel structure, 90 ft high, and will accommodate 20 cars, while taking up no more ground space than that which is normally required for three vehicles. The width of the structure is 24 ft and the length 20 ft.

The motorist drives onto a platform, gets out, puts a coin in the slot and presses a button. The platform carrying the car then moves to one side while an empty platform takes its place ready for the next arrival.

When the motorist returns, he presses another button, numbered according to the platform on which his car rests, and the vehicle is brought gently to ground level within one or two minutes.

The movement of the lifts is so arranged that the car park will not operate as long as anyone is within range of any of the cabins. When the park is full, the mechanism stops with no parking cabin standing in the entry.

The unit can be built to accommodate two cars on each platform to give a capacity of 40 cars. These 40 car units, which are 90 ft high can be set up almost anywhere, adapted for enclosure in any shape of building and moved quickly if needed.

One of these car parks is already in service in Milan. Six more are to be installed in Milan, and two in Rome.