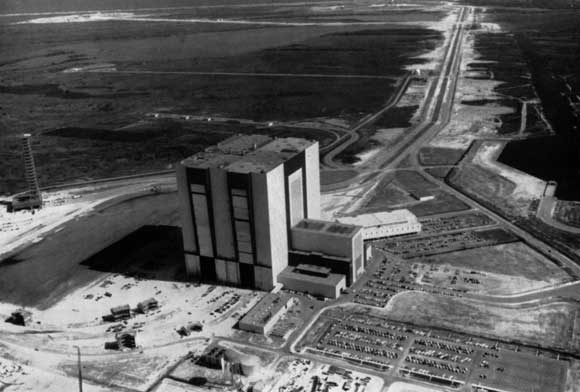 The Spaceport at Merritt Island, near Cape Kennedy: the three-mile track to the launching area is seen in the background.

The rapid pace of technological development during the past few years is most apparent in space exploration. The tiny bell-shaped Mercury capsules which carried the first American astronauts into space have already been consigned to museums and new generations of spacecraft taken their place. 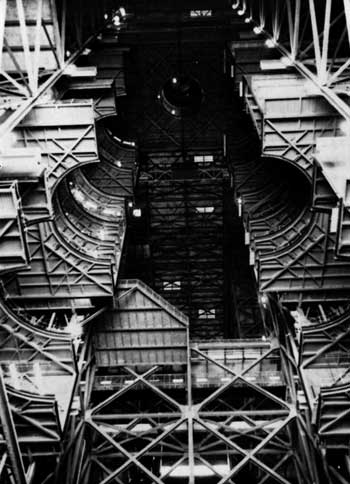 The view looking upwards inside one of the work platforms emphasises in a striking manner the vital role of steelwork in this large project. During assembly the semi-circular platforms are moved inwards to grip the rocket tightly so that men can work on many levels simultaneously. 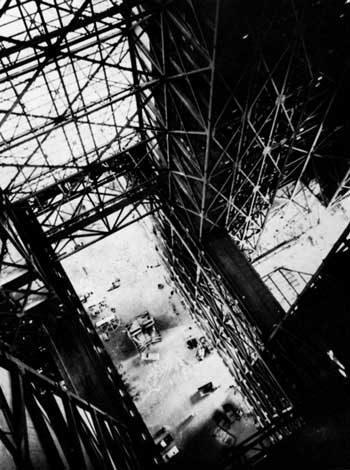 Interior of one of the four bays in the vehicle assembly Building. 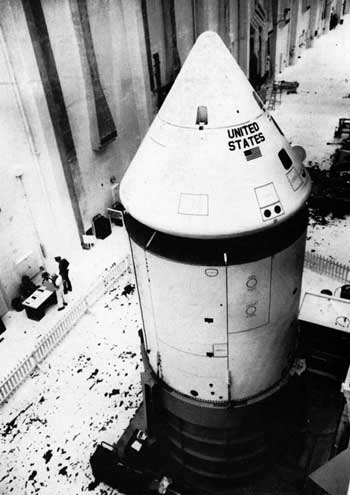 The first Apollo spacecraft ready for transport to the launching area. 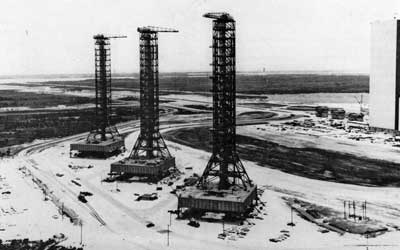 Giant mobile launch pads in which the rockets are transported to the launching site: complete with rocket each weighs 5,358 tons.

To send the spacemen off on their long voyages of exploration, the United States has built a new technological wonder – the Spaceport on Merritt Island, adjacent to Cape Kennedy. On what was marshland only three years ago, the biggest construction, Launch Complex 39, has now been completed. To build it the National Aeronautics and Space Administration embarked on the biggest and most expensive (one thousand million dollars) construction project in history.

The Spaceport is a vast complex of outsize buildings and mammoth machines fashioned from a million tons of steel and nearly 17 million tons of concrete. Its 80,000-acre site is criss-crossed with 100 miles of roads and 22 miles of railways. A force of 10,000 works there, each with a part to play in the launching of astronauts to their far-off destinations.

The most imposing and unusual feature of launch Complex 39 is the great building where the lunar spaceships are put together and made ready for flight. This is the Vertical Assembly Building, a black and white cube-like structure with three million cubic yards of work space and big enough to house sky scrapers and to breed its own weather. It is nearly 600 ft long, 418 ft high and 410 ft wide and has a volume one and a half times that of the Pentagon, the world’s largest office building. A structure of this size, with no obstructions between floor and ceiling could easily create interior conditions leading to the formation of clouds and rainfall. Air conditioning prevents this from happening: the air-conditioning plant is of 10,000 tons capacity and would be adequate for a small town of 3,000 houses.

Because the building resembles a huge box, its designers calculated that it might blow over in a hurricane. Wind tunnel tests confirmed this possibility and the solution was to anchor the structure to bedrock with 4,000 steel piles, which were driven 150 feet into the soil. To shut out the deafening noise of the Saturn V lift-off from the launch pad three miles away, and for protection against shock waves, the building has been designed without conventional windows: instead translucent panels of reinforced translucent plastic were used.

Inside the cavernous building four Saturn V rockets can be assembled vertically at one time. The four assembly bays have work platforms which can be extended vertically and horizontally to give technicians easy access to the rocket at any level. Each Saturn is assembled on a mobile launch pad inside the Vertical Assembly Building, this pad later serving as the rocket’s actual launch platform.

After assembly has been completed and the entire unit checked and rechecked to the stage of a simulated countdown the rocket and the mobile launch pad are transported to the actual launch site. This three-mile journey is an immense undertaking, involving conditions which have never been met before. To cope with it some remarkable equipment has been devised and some strange operations planned.

To lift and carry the 5,358 ton load of the assembled rocket and its mobile launcher in an upright position to the launching area, a giant caterpillar-like machine known as a crawler transporter, of fabricated steel construction, is used. It is powered by two main-drive diesel engines of 5,500 hp and also has diesel generators of 2,130 hp for the levelling, jacking, steering, lighting and electronic systems. Along a concrete runway as wide as an eight-lane highway, this great crawler moves at a snail’s pace to the launch area, a journey taking at least three hours.

At the launch area, where only the final preparations will have to be carried out before lift-off, three launch pad sites have been constructed. In the centre of each is an elevated concrete and steelwork structure to anchor support pedestals for the mobile launch pad and arming tower – a 380-ft steel lattice structure designed to give engineers access to all parts of the assembled vehicle at any level. The tower and the mobile launch pad are both placed in position on the support pedestals by the crawler transporter. Then, just before launching, the tower is removed and the rocker left in position.