Japanese architects provided some unusual and rather daring roof designs for several of the buildings in the Olympic village in Tokyo. One of these structures is the Gymnasium for National Indoor Games, a 200-ft. circular building seating 4,000.

The roof consists of 3/16-in. thick steel plate shingles supported on hanging steelwork trusses spanning across from the main tubular spine to the vertical columns of the circular spectators’ stand. The outside surfaces of the shingles are coated with a heat-reflecting silver-coloured paint and the underside is sprayed with 1-in. thickness of asbestos: below this are rock wool batts wrapped in polyethylene and a ceiling of expanded aluminium sheet.

The spine itself spirals down, rather like the contour of a snail’s shell, from the top of the 100-ft. high fabricated main column or mast to a massive anchor, to which it is connected by a tie beam. Both the column and tie beam are pre-stressed to resist the considerable pull of the spine which, under dead load, reaches a maximum in the region of 355 tons. The total pre-stress for the column is 1,500 tons, and 1,900 tons for the tie bar.

Because the trusses hang between the spine and the perimeter of the arena they assume a shape closely resembling catenary and the bending stresses are therefore insignificant. Thus it has been possible to keep them very slender, considering the fact that they span instances of up to 197 ft. Each is, however, designed to act as a reverse arch truss against buoyancy created by wind loading.

The trusses are, in effect, light riveted lattice girders constructed from angles in lengths of 32 to 40 ft.: each truss differs both in length and contour. 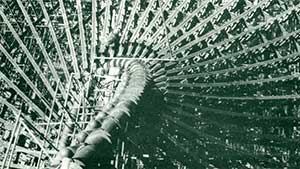 Considerable thought was given to the design and construction of the 32-in. diameter circular-section spine, which is a precision engineering job. It is 262 ft. long and constructed in three sections, each made from material of different thickness and quality to suit the variations in stress imposed throughout its length. These were factory made to the designed curvature and then welded together on site, using low hydrogen electrodes to eliminate any chance of weld cracking. These latter joints were all checked by gamma radiography and then annealed with induction heating equipment.

Another, much larger, building employing a very similar roof design is the National Stadium, which houses two swimming pools. In this case, however, the circular-section spine is replaced by two supports, each formed from thirty-one 2-in diameter  steel cables. The roof and hanging trusses are of the same design as those for the smaller building.

The architect Kenzo Tange and the structural engineer Yoshikatsu Tsuboi together designed both of these buildings.