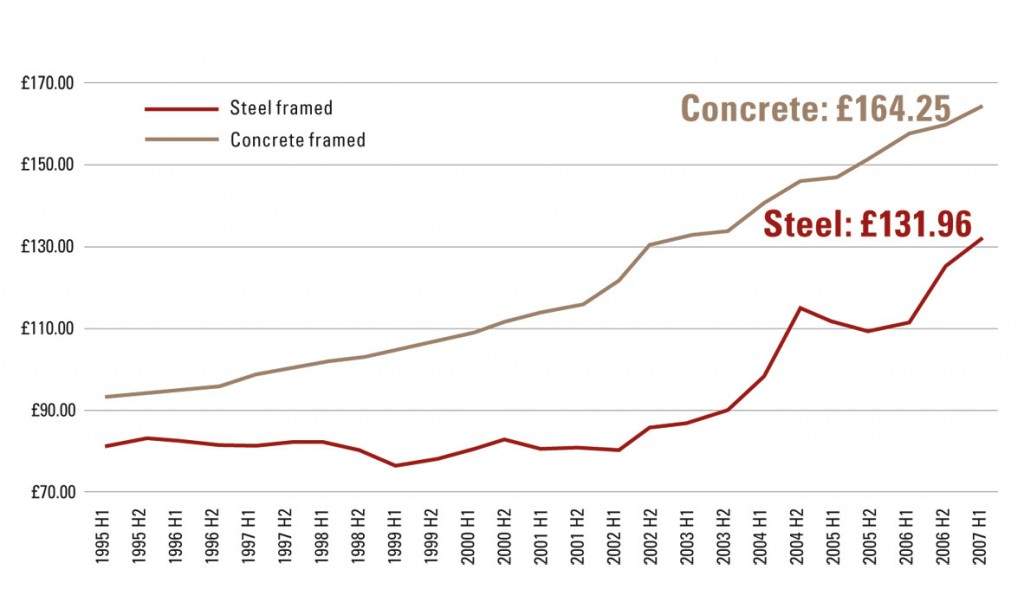 Structural steel framing solutions are faster and cheaper to build than reinforced concrete alternatives, according to the latest update to the independently produced cost comparison study for commercial buildings.

The study, commissioned by Corus, was conducted by a team including Davis Langdon, Arup and MACE. It considers two typical modern commercial developments, Building A, which is a 2,600m2 office in Manchester, and Building B, which represents an eight-storey prestige office building of 18,000m2 in London. A range of steel, composite and concrete based frame solutions for both buildings were fully designed, costed and programmed, with prices as at June 2007.

The graph shows that steel remains the cheaper option, as it has been for many years. Comparing the constructed component costs of the alternative framing solutions over the same period, Department for Business, Enterprise and Regulatory Reform (formerly Department of Trade and Industry) statistics show that the relative costs of the key steel framed building components fire protection and metal decking, have fallen when compared to ready mix concrete and reinforcement bar which are key components of concrete frames.

“These official statistics help explain why the strong competitive position that steel long ago established over concrete remains unchanged,” said Corus General Manager Alan Todd. “The cost of a frame and floor is a relatively small part of the total cost of a development. However, the selection of a steel frame reduces construction times and has a beneficial effect on other major variable cost items such as foundations, cladding and services, leading to significant cost savings for the overall project.

“Designers and contractors appreciate the cost and other benefits of steel, of which a strong sustainability case is increasingly important, and this explains why steel frames enjoy a market share of 73% for multi storey frames and dominate the single storey market with a share of over 90%.”

Fuller details of the study can be found at www.corusconstruction.com/coststudy