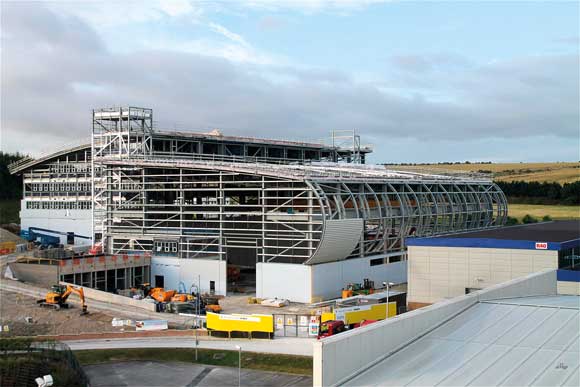 Curved façades help the building blend into the landscape

A steel-framed facilities building at the Harwell Science Campus has been designed to provide column-free testing and storage space, as well as to fit unobtrusively into the rural landscape.

It has been claimed that every major industry sector in which the UK economy is actively involved either resides at Harwell in some form or visits the campus to conduct research and product development.

One of the main tenants is Rutherford Appleton Laboratory (RAL), operated by the Science & Technology Facilities Council which provides research into a diverse range of areas such as particle physics, space science, materials, astronomy, and computational and e-science.

Being built by Willmott Dixon, the facility consists of two large open plan halls; the handling hall and the test hall. Each hall is a single storey, steel braced frame measuring 70m-long × 35m-wide.

The two halls sit side-by-side, share a central row of columns and are part of one large steel frame. However, due to the sloping site, there is a 5m difference of floor level from the testing hall at the top of the site to the lower handling hall.

“Steel was the obvious choice for this project because of the building’s size and the required spans,” says Clarke Nicholls Marcel Structural Engineer Steven Coates.

“We did initially look at a portal frame design, but as both halls’ steelwork supports large overhead cranes there would have been too much lateral loading, and so we have vertical bracing providing the structural stability.” 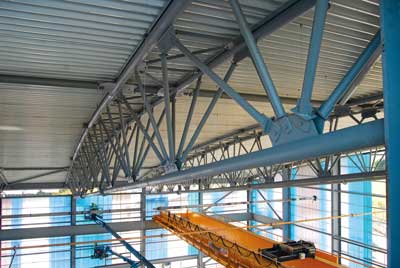 Creating each hall’s open column-free space is a series of 2m-deep 35m-long triangular roof trusses, which slope downwards from the central row of columns. This means that the interior height of each hall slopes down from 19m to 14m at the perimeter elevation.

Tubular members were chosen for the trusses as they are less likely to collect dust, something which is highly important in a sterile scientific and research environment.

According to Willmott Dixon Site Manager Noel Cafferty, the sloping roofs have been designed to add architectural interest to the structure as well as helping the halls to blend into the surrounding countryside.

The facility is set into a dip in the landscape, dug-out by Willmott Dixon early in its construction programme. The building is also set on the very edge of the Campus and so the upper parts of both halls can be seen from afar and importantly from a popular walking trail. The sloping roofs help the structures become less obtrusive, while the Kalzip roof and wall cladding has a striped design and colour that is said to blend into the horizon.

Steelwork contractor Hambleton Steel brought the tubular trusses to site in three sections. Two mobile cranes were used to erect the trusses, one lifting two bolted-up sections, while the second crane lifted the third piece. Once both pieces were bolted to the supporting columns, the final connection between each piece was made while the steelwork was being held in place by the cranes.

Hambleton’s steel erection programme started with the structurally independent four-storey braced steel frame that forms an office building, which is connected to one end of the test hall.

After erecting the offices, Hambleton progressively erected the two halls with two gangs working simultaneously. Once the main frame and roofs were up Hambleton then installed a number of interior features, along with an architectural bullnose element that runs along the main elevation of the handling hall. The bullnose feature was created by attaching a series of secondary curved members to the main frame.

Inside the handling hall there are two structurally independent buildings; the laboratory and the handling office. The laboratory is a single storey load bearing blockwork building with precast planks forming the flat roof which will be used for storage.

The two-storey handling office is a braced steel frame with composite beams supporting a 130mm-thick concrete slab on profiled metal decking. The roof beams are cellular to allow distribution of services within the structural depth.

Two steel-framed stair towers are located at either end of the building and were both installed by Hambleton during a return visit sometime after the main frame had been completed.

The Facilities Support Building is due to complete during Spring 2018.

The four-storey offices were erected first