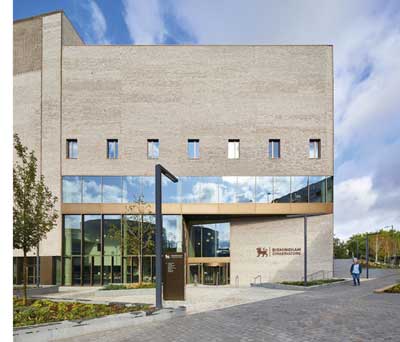 The RIBA West Midlands’ Building of the Year Award 2018 has been presented to the Royal Birmingham Conservatoire, the first purpose-built music college built in the UK since 1987.

According to the judging panel, the steel-framed Conservatoire represented not only a rare opportunity to create a state-of-the-art facility fit for the digital era, but also to anchor Birmingham City University’s expanding City Centre Campus with a building of civic stature.

Each of them required a different acoustic treatment to suit their size and intended programme of music which, in turn, influenced all aspects of the design, necessitating an exceptional level of architectural, environmental and acoustic integration.

A box within a box design, whereby all the spaces are individually isolated from each other, was employed for the music spaces. Each steel-framed space is separated from its neighbour by insulation and a void of at least 20mm.