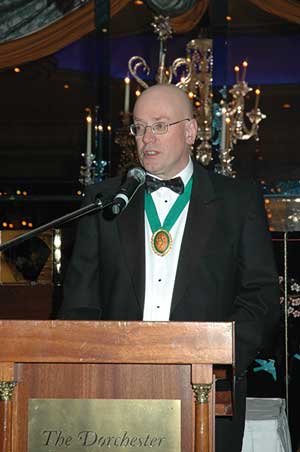 New order enquiry levels have been good since the start of the year and many steelwork contractors have reasonable order books despite the gloomy overall economic picture, said BCSA President Richard Barrett (pictured right) in his address to the National Dinner.

Significant downturn in demand had however forced steelwork contractors to make capacity cuts. Steel construction output was expected to be between one million and 1.1M tonnes this year, after 1.3M tonnes in 2008 and 1.4M tonnes in 2007.

Mr Barrett was pleased to see that steel was maintaining its share of the construction market at the record levels set during the boom years, with the latest independent research from Construction Markets showing a share of over 70% for non residential multi storey buildings, and 97% of the single storey industrial buildings market.

“After a dramatic rise in the prices of all construction materials up to the summer of 2008, I am pleased to report that since then prices have been much more stable, and we anticipate this to remain the case for our input costs throughout 2009,” said Mr Barrett.

He applauded Business Secretary Lord Mandelson’s announcement of support for business, in particular the Prompt Payment Code and a 10-day payment period, but this had to be made binding all the way through the supply chain.

A focus for BCSA’s lobbying this year will be encouraging recognition in contracts of the fact that much work is carried out off site in manufacturing facilities. Many contract forms failed to recognise this, so failed to encourage the adoption of modern methods of construction.

Mr Barrett concluded: ”We believe that clients, architects and designers will consider steel as the material of choice for zero carbon buildings. Already, at the end of a building’s life, 99% of constructional steel is either re-used or re-cycled, a far greater percentage than wood or concrete, making steel the sustainable building material.” 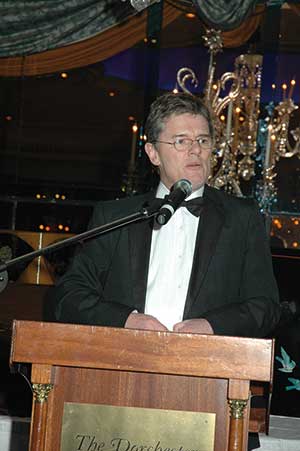 Guest speaker David Smith (left), Economics Editor of the Sunday Times, said that although the UK economy was suffering from the global downturn, it was not doing as badly as the gloomier pundits were saying.

Mr Smith said he hated the tendency to ‘self flagellation’ seen in some commentaries: ”The UK is not another Iceland. I hate that kind of comment. We shouldn’t talk our own economy down. It is true we are suffering partly because we have a big financial services sector, but it is only 7% or 8% of the economy, which makes it smaller than manufacturing.”

On the positive side, every major economy was being given a stimulus through increased government spending and other measures, and the UK had seen a significant devaluation that made exports cheaper. “Normally this would have seen the economy off and running and I expect we will see the green shoots of recovery before the end of this year.”

Mr Smith predicted that the mass media would soon get tired of emphasising the downside of recession and would start looking for the recovery story, which would mark a turning point.