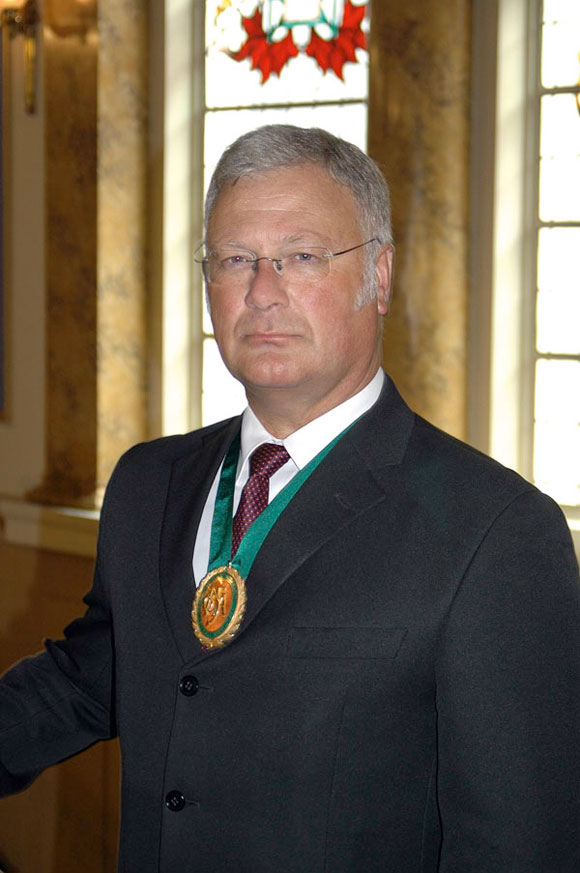 The next time you notice a sign on a motorway overhead gantry warning of road conditions ahead – a crucial part of the Highways Agency’s managed motorways strategy – have a quick glance at the truss type structure that supports all that sophisticated information technology. Chances are that it was manufactured and erected by specialist steel contractor Nusteel Structures.

Nusteel’s Managing Director Ivor Roberts has recently started a two year tenure as President of the British Constructional Steelwork Association, a period he expects to coincide with an improvement in the fortunes of the industry.

“I could have hoped for a better economic background for starting my time as President,” Ivor admits, “but as an industry we are still in reasonably good shape, and as an association we are confident that the corner has either been or is about to be turned, so we can at least hope to be firmly on the growth track again by the end of my Presidency.”

Ashford born Ivor is very much a Man of Kent, (which means born east of the River Medway as opposed to the Kentish Men born on the other side), whose own career started at Nusteel some 40 years ago as an Apprentice Draughtsman. After seven years he left and came back during the early 1980’s recession, when he was the only in-house draughtsman. Subsequently he became Works Manager, then General Manager and, by 2000, he had been appointed as the Managing Director of the company.

Nusteel might not be the biggest BCSA member, with a workforce of 75 and turnover around £10 million, but its steelwork is among the most visible as it has fabricated and erected most of the large signage gantries spanning key motorways like the M25. Nusteel has fabricated and erected 550 motorway gantries over the past ten years as well as around 400 cantilevers plus many offset “T” structures. ‘These large gantries and the information technology that they carry are a vital part of the strategy for managing the UK’s roads and we are proud of what we have been able to do to support that,’ says Ivor. 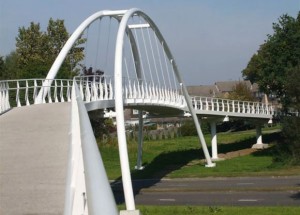 This footbridge over Mill Lane, Bracknell is an example of Nusteel’s bridge and gantry work

Nusteel has a 57 year history in steel construction, founded by Robert Benson, a Royal Engineer, on his return from wartime service that included constructing bridges across the Rhine whilst under enemy fire. Mr Benson and his family still own the company, originally called South Coast Welders, which has grown to become a major supplier of information support gantries, and a specialist in design, manufacture and installation of road and rail bridges in all their forms.

The scale of the operation invariably surprises visitors when they visit Nusteel’s modern purpose built workshops and design office on a ten-acre site at Lympne, near Hythe in Kent. This rural location is not exactly typical industrial heartland territory – one of Nusteel’s nearest neighbours is the well known Port Lympne Wild Animal park – but although steelwork contractors may be a rare species around here, the site has a long industrial history, having been used as an army camp and as a WW1 and WW2 airfield.

Purpose built fabrication and finishing shops are located on the site, where some of the large space available is frequently taken up by storing already assembled structures.

Recent investments, such as completing a 135m long fabrication workshop, means that  the longest span structures can be efficiently handled. Some of the sign gantries being constructed for the M25 are 53m long, and Nusteel can cater for up to eight of these structures at a time. The longest M25 gantry was 70m, believed to be the longest in the UK, this was moved in three sections and assembled on site prior to installation. Other improvements have allowed us to use more natural daylight in the workshops and together with new plant, this has lead to an £80,000 per year saving in electricity costs.

To accommodate the very long spans that Nusteel manufactures, they have their own dedicated slip-road at a junction off the nearby A20. Nusteel are allowed to control the traffic lights to get the abnormal loads out on to the road network with minimal disruption. 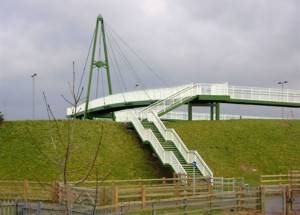 Footbridge over A6 at Alvaston

Substantial investment in surface treatment processes, including shot-blasting, metal spraying and multi-coat paint systems, means that the site is capable of providing all of the processes needed for projects without hauling steelwork up and down the country for specialised treatments. Nusteel maintains its own fleet of purpose made transport equipment that allows directly employed installation teams to efficiently deliver and erect long span structures throughout the UK and Northern Ireland.

As well as the gantries and bridges for which it is best known, Nusteel has a track record on a wide range of other types of projects. Nusteel fabricated some of the external steelwork on the iconic Lloyds Building in London. While passenger links at ferry berths and airports are another market and it was an airport project that gave Ivor his biggest satisfaction. “I think the best structure we have ever provided was a baggage handling facility at Gatwick. To anyone who notices it, it probably just looks like a boring box. It is 110m long and approximately 8.5m wide and 3.5m deep, designed to carry conveyors. We designed, manufactured and installed it with everything going precisely as planned.”

About 45% of the workforce are former Nusteel apprentices and the company has no difficulty in recruiting suitable candidates for their apprentice scheme.

Ivor’s ambitions for his Presidency include encouraging more steelwork contractors to join the BCSA. “I am sure most members would agree with me that they have benefited hugely from membership, not least by being part of a close knit business community whose members are willing to help each other out with advice and support. That community extends to include the national steel producer, Tata Steel, who are working with BCSA under a joint market development agreement for the benefit of all. The venture is a shining example of supply chain cooperation and a key element of our sector’s return to good health.”