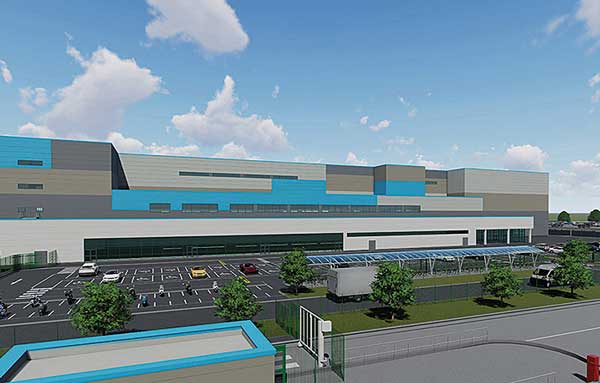 Tenders are being invited for construction of what will be one of the UK’s largest sheds, a four-storey, 213,000m² ‘mega shed’ to be built on the site of the disused Littlebrook Power Station at Dartford, Kent.

The warehouse has been pre-let, reportedly to online retailer Amazon, although the developers will only confirm that the pre-let is to a major online retailer. Amazon is known to have been seeking a site for what would be its largest distribution centre in Europe.

Planning permission was granted to Tritax Big Box and Bericote Properties for the £200M scheme that will transform a 45 acre plot, part of a 119 acre site of a four oil and coal fired power station complex close to the Queen Elizabeth II Bridge and the Dartford Tunnel. Contractor ISG has been reported to be front runner for the main contract award.

The project is to target a BREEAM ‘Excellent’ rating, employing a range of emission-reducing features including a 3.5MW roof solar panel system, energy saving lighting, low water use and electric car charging points.

The developers say the project will not only deliver much sought-after high specification logistics space for London, but also bring enhanced local infrastructure and significant employment opportunities to the local area.