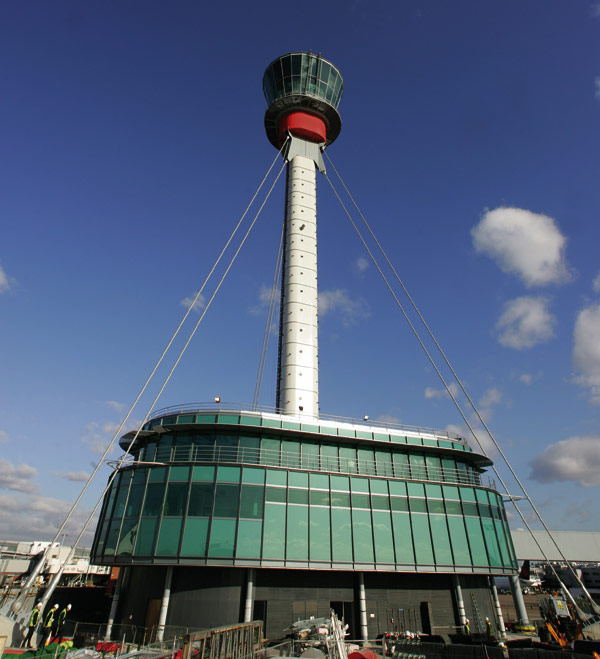 An 87m pre-fabricated steel control tower at Heathrow Airport has been completed ahead of schedule after the structure was jacked up within a live airport environment.

Under the £50M project, the 1,000t cabin of the control tower was pre-fabricated by Bolton-based Watson Steel some three kilometres away from the tower’s location next to Terminal 3. The completed 27m high cabin was then rested onto a 200t lifting yoke, place onto three trailers and rolled two miles along the runway in a painstaking night-time operation.

Temporary strand jacks from three lifting towers were then attached to the cabin which was hydraulically lifted. As the cabin rose, eight sections of the slender triangular shaped steel mast were slotted in underneath.

Once the structure was erected, the next challenge was to install six steel macaloid cables that would be tensioned from the top of the tower to keep the slender structure stable in high winds.

A curved piece of steel was fitted onto the corners of the three storey base building for each of the six steel cables to rest on while they were tensioned up.

“There were a number of technical challenges that would be difficult enough in their own right without such challenging site conditions,” he said. “But to do it in such a confined space in a live airport environment was a major logistical challenge. Everything had to be 100 per cent planned. There was no scope to improvise.”